Latest TV, the Brighton television station, has recruited the first transgender news anchor who will also take on the role of head of diversity at the channel.

Sophie Cook, who worked as the club photographer for the Premier League football side Bournemouth AFC, started in her new role on Monday (13 June).

Latest TV chief executive Bill Smith said: “This is big news for us and for TV and for progress as Sophie Cook is the first ever transgender news anchor in the UK and Europe. And of course this first would happen in Brighton.

“Brighton is an island of sanity in what can often be seen as an ocean of intolerance. 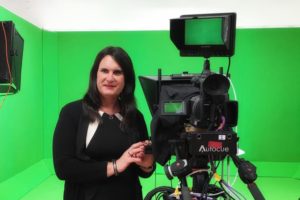 Sophie Cook said: “It’s a great honour for me to be given this opportunity by Latest TV and is a real step forward for transgender visibility and awareness.

“Brighton and Hove is a unique city, full of amazing diversity and I’m proud to be able to reflect this by bringing the news to everyone in the city on Freeview channel 7 and Virgin Media 159 and across the world through www.thelatest.co.uk.”

Sophie Cook was previously known as Steve and has two children. Her career has included a stint in the Royal Air Force (RAF), racing motorbikes and as a rock photographer.

She made headlines in January after becoming the first transgender woman to work in the Premier League.

Last summer, when coming out as transgender to her club, she feared that she would lose everything.

But the club and the fans were great, she said, and she now talks at conferences nationwide, including at Wembley Stadium, about those fears and how she overcame them.

She is currently making a documentary about football versus homophobia with Latest TV.