A 48-year-old accountant from Hove has become the first deaf swimmer to complete a solo Channel crossing.

Andrew Rees, of Nevill Avenue, Hove, swam the Channel on Sunday (17 July) setting off shortly after 8.30am.

He reached a French beach 15 hours later at 11.30pm GMT – or 12.30am French time – after an unexpectedly choppy crossing.

Mr Rees said: “It was a challenge! According to the weather forecast, it was supposed to be a good day. For the first six hours it was choppy and then it just escalated into a Force 6.

Mr Rees swam the Channel to raise money for the Great Britain Deaflympics swimming team to help them make it to the Games in Turkey next year.

He won two golds and a bronze when he took part in 1989 so understands the challenges for the swimmers who are unfunded – unlike conventional Olympians. 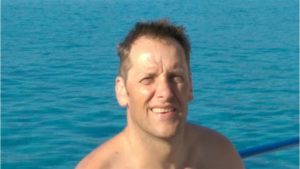 Anyone wanting to help Mr Rees add to the total can go to his Just Giving page by clicking here.

He was stung by jellyfish during his swim – with no wetsuits allowed, it’s always a potential problem.

His coach Fiona Southwell, from Brighton Swimming Club, paid tribute to his determination and the team spirit around him, saying: “Andrew’s friends were unbelievably supportive and amazing. A big party of family and friends waved him off at Dover. It was a very emotional experience.”

When Andrew finished up in France, one friend said: “It was the best moment of my life.”

Mr Rees thanked them all and said: “I wouldn’t have got there if it wasn’t for them. I’m suffering for it. I couldn’t walk afterwards. I was crawling.”

Touching the sand in Sangatte was definitely the best part, he said. The worst: “Bobbing up and down on the big waves.”

Fiona Southwell has coached 37 swimmers before their successful solo crossings. She said: “Of all the 37 swims, Andrew’s had by far the most arduous ending. The conditions were hard, trying to get ashore. It was a horrendous ending.”

But if he beats his fundraising target it will be well worthwhile. To help Mr Rees to help deaf swimmers, click here.