Hundreds of people have signed a petition urging Brighton and Hove City Council to consult properly before agreeing a proposal to privatise the city’s public tennis courts.

The secrecy surrounding the possible sell-off is one of the reasons prompting more than 1,000 people so far to sign the petition including Brighton-born comedian, author and tennis lover Tony Hawks.

The petition, set up on Change.org by Hove tennis player Des O’Dell, urges the council “to engage all user groups of tennis facilities in the city before deciding on future funding arrangements”.

The petition also says: “Following cuts from central funding the council is undergoing spending reviews and intends to make considerable savings to the parks and gardens budget which includes the provision of tennis facilities.

“There is a meeting of the Environment, Transport and Sustainability Committee on (Tuesday) 17 January that will consider a proposal by the Brighton and Hove Parks League for the citywide running of all 68 tennis courts.

“This proposal has had very limited circulation but will affect all users of tennis facilities in the city. The success of this proposal will be dependent on the engagement of all users. 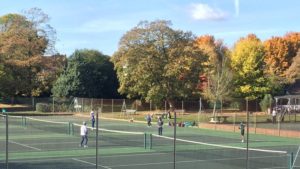 “If it is not accepted, most parks have no alternative proposal and the future of courts is uncertain.

“If it is accepted, most tennis users will be unaware of the change and its impact on their usage.

“This is a serious threat to a valuable community asset that is used by the Parks League and many other groups and individual Brighton and Hove residents.

“The proposal should be made available to the widest possible population of Brighton and Hove residents who use the city’s tennis facilities.

“This will best inform the council of the likely success of any proposal and ensure the user’s engagement for long-term success.”

The poor communication and lack of engagement is foreshadowed in a report by Brighton and Hove Community Works in November 2015.

It highlighted the poor relations between the council and the thousands of tennis players in Brighton and Hove.

The council has entered into a partnership with the Law Tennis Association but the LTA’s poor relations with grassroots players was also touched on in the report.

The petition is due to be presented to the council’s Environment, Transport and Sustainability Committee on Tuesday at Hove Town Hall. The meeting, which starts at 4pm, is open to the public.

Councillor Robert Nemeth, who has been supporting those behind the petition, said: “I have been delighted to work with the organisers of this petition for a number of reasons – not least to make public a series of proposals that have huge implications for tennis players across the city.

“While there are some good reasons to pass on the management of the city’s tennis courts to those who actually use them, there are still many details to be worked through and much more consultation to be carried out.

“Very few tennis players even know that the council is considering such a move. I hope that the petition raises awareness among both councillors and tennis players.

“There is undoubtedly a good deal to be done but it needs to have the right level of funding, generous assistance from the council during the transition and the wholehearted backing of the tennis community.

“Not one of these conditions is being satisfied currently.”