Labour ‘must do more’ to prevent anti-semitism, says Hove MP

Mr Kyle opened a debate about Holocaust Memorial Day and said: “I stand here as a Labour MP. I look to see how I, and my party, can strive harder to avoid language and actions that are, or are perceived to be, anti-semitic. As individuals and as a political party, we must do more.

“Not only should we react swiftly when there is anti-semitic activity. We should be doing more to prevent it in the first place because the point of offence is the point at which we know we have failed.

“Because fewer survivors remain, it is easier to get away with trivialising those events or making light of them.

“It is not uncommon these days to hear people who are officious being described as having ‘Nazi tendencies’ or to hear those in public life mindlessly calling others ‘concentration camp commandants’ simply for disagreeing with them or feeling that they have strong views.

“Those sorts of comments are extraordinarily irresponsible because they casually draw a line from those who deliberately attempted, through state murder, to kill every member of an ethnic or a religious group – the first and only time this has happened in history – to 21st century daily life in a country such as Britain.

“To do that not only trivialises the horrific events of the past but makes the job of those who set out on the malicious path of outright holocaust denial that much easier. 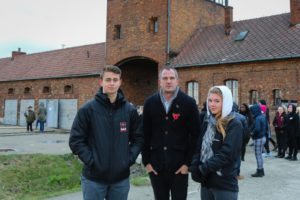 “It is hard even to imagine the events we are remembering today because of the sheer scale of human suffering involved.

“Approximately six million Jewish men, women and children were murdered by Nazi Germany and its collaborators during the Second World War.

“Anti-semitism was the defining element of Nazi ideology. The persecution of Jews started immediately after Hitler’s accession to power in 1933, with policies designed to force emigration.

“The intensity, ferocity and brutality of such policies escalated throughout Nazi rule, resulting in mass murder and genocide.

“It is therefore understandable that the holocaust plays such a painful and powerful role in modern Jewish culture, both here in Britain and around the world.

“I am fortunate to have a large and thriving Jewish community in my constituency of Hove and Portslade, which is proudly home to four well-attended and active synagogues.

“The community plays an active role in all aspects of life in our beautiful city on the south coast, from participating in festivals to hosting a dedicated Remembrance Day event to remember Jews who fell fighting the Nazis as part of the allied offensive.

“The community has welcomed me to events and helped me to understand Jewish culture and traditions, including the impact and importance of the holocaust in modern Jewish life.

“Rabbi Andre and Rabbi Elle in particular have invested many hours in answering my questions and discussing the complex history and modern faces of Judaism, both in my own community and further afield.

“The great thing about a group that is so welcoming and integrated into the ebb and flow of community life is that it inspires others to share, learn and join in which is why next week I will proudly join students and staff at Blatchington Mill, a local school that is holding an event to mark Holocaust Memorial Day at which people from throughout the city will come together to reflect on the meaning of the holocaust for today’s generations.

“As we approach Holocaust Memorial Day next week, it is appropriate that we in this House memorialise these terrible events.

“The memorial date was chosen to respect the liberation of Auschwitz-Birkenau by allied forces on 27 January 1945.

“The death camp sited in the Polish town of Auschwitz has become symbolic of the holocaust because of the sheer scale of murder that occurred there: 1.1 million lives were savagely ended at that place.

“In November last year, I visited Auschwitz with 200 students from throughout Sussex, along with my colleague from across the floor, the honourable member for Bexhill and Battle (Huw Merriman).

“Our visit was under the auspices of the Holocaust Educational Trust. I cannot praise highly enough the thoughtful, engaging and extremely powerful way the trust guides students through the process of learning about and experiencing Auschwitz.

“Before the visit, students get together in a set of structured seminars to learn the history, policies and facts behind the holocaust, even meeting a holocaust survivor. They then visit Auschwitz. “Finally, when they return, they meet again to talk about the lessons and what it means for them as individuals and us as a society the past, the present and the future.

“These fortunate young people will carry the burden of knowing the full horror meted out to Jews by Nazi Germany. They will also benefit from the wisdom that experience bestows. 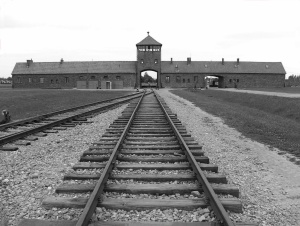 “Two of the students on my visit were from Brighton and Hove – Joe and Mattie from Cardinal Newman and Brighton College schools. They showed the depth of thinking, sensitivity and thoughtfulness that makes me so proud of young people today.

“Together, we saw the cells in which people who tried to escape were bricked up and starved to death, the wall against which so many people were shot dead that the ground beneath could no longer soak up the blood, the desperately cold cabins where people slept, the train tracks that brought people to their deaths in cattle trucks and the sidings where doctors – the people trained to save and enhance life – used their training to decide who was strong enough to work and who should be put to death that very day.

“For those of us who celebrate the good of which humanity is capable, it is a shattering place to visit.”

The next speaker was Sir Eric Pickles, the former Communities and Local Government Secretary and the Conservative MP for Brentwood and Ongar.

He said: “It is a great honour to follow the honourable member for Hove who made a very thoughtful speech. I have to say that I agreed entirely with what he said.”

As the debate drew to a close the Conservative MP Andrew Percy, a junior minister, also thanked Mr Kyle.