Residents of a short street already home to flats for the homeless which residents say is plagued by antisocial behaviour were horrified to learn this month that the council intends to convert two more houses into a third homeless housing scheme. 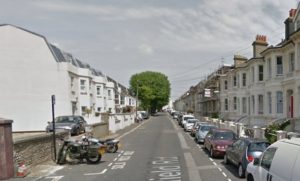 People living in Seafield Road say they already shoulder more than their fair share of antisocial behaviour from residents of two housing schemes for homeless people with substance issues which have been operating there for more than 20 years.

So when they discovered from a chance remark made by a councillor that the council planned to convert two more houses into a hostel to rehouse a homeless project which was blamed for similar problems in the city centre, residents were understandably concerned.

In a street of about 46 houses, this means four will be used to house people with drug, alcohol and other issues in a street already frequented by dealers and street drinkers and surrounded by places to buy alcohol.

But the council says there is support locally for action to be taken on homelessness, and the West Pier Project is part of this.

Resident Janet Bray, who has lived in the road for 23 years, said: “I was told about it last Tuesday when talking about the existing antisocial behaviour issues. Just at the end of the conversation, I was told by the way, the West Pier Project is moving to Seafield Road.

“It’s astounding given the history. This has been done by stealth. They’re intending to get this done by early April.

“People are furious that this happening by stealth that no one has been consulted and that no impact assessment has been done despite the very well known trouble.

“This is not a nimby issue. Seafield Road is already an oversubscribed host community and we are saying no more. We already have needles and faeces and condoms on our street. We have got our share. Sort out the problems we have got, don’t add to them.

“They really need to stand back and look at the location of hostels. Within 1km there are 10 places that you can buy alcohol.

“There already exists what I term an ‘open corridor’ between the properties run by Hartman Homes at 3 and 7. Housing a further 22 people with similar or the same issues, needs, wants and ways of living is only going to extend this corridor for almost the entire length of the street.

“There’s already ghettoisation. The street drinkers come along, there are people sneaking out of the hostels in the morning who shouldn’t be there. You see the dealers pulling up in their cars and I regularly pick needles up from the garages.

“How a council that has an in depth knowledge of the issues that we have faced for 20 years that this decision could be made without any consultation or impact assessment. It shows contempt. Our concerns have always been trivialised. This is just the icing on the cake.”

Hove MP Peter Kyle wrote to residents, echoing many of their concerns and saying he was asking the council to carry out a community impact assessment.

He said: “I am as concerned as you are about the proposal for another hostel on your road when the West Pier Project moves there. Whilst it is different accommodation to what already exists on the street, and there will be 24-hour staff on site, I am worried about the impact of it in your area.

“Whilst I’m sure we’ll all agree that we need more support facilities for vulnerable people in our city, what concerns me is the lack of consultation by the council about where to place it.

“I will speak to the relevant decision makers and ensure that proper procedures and assessments have been performed. I will also liaise with your local councillors and support them on finding a solution.

“My immediate demand to the council is that a community impact assessment is carried out before further work continues.”

A council spokesperson said: “Brighton and Hove is a city with an acute housing crisis, and homelessness is an increasing pressure. As a council we do all we can to help the vulnerable by providing vital support to those at risk of homelessness or living on our streets.

“The West Pier Project is a high support service for single homeless people and rough sleepers with complex needs. The project is part of a broader citywide effort to help people experiencing homelessness and there is much support locally for action to be taken on that.

“We have considered carefully all options for the future of the West Pier Project and will soon be providing more information about the proposed move of this service.

“We are committed to engaging with residents about any concerns and our aim is, while recognising the challenges, to balance everyone’s needs.”