A Brighton pole dancer has been banned from a citywide sports festival after being told she could damage the council’s reputation. 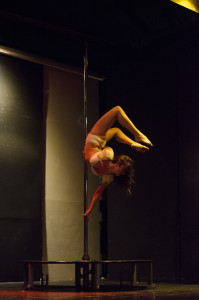 After registering and attending preliminary meetings, she was shocked to receive an email this week saying that she would not be able to participate after all.

The council’s sports development manager told her: “The activity is currently not permitted within council-owned leisure facilities and it is felt that there are perceptions associated with pole dancing which the council needs to avoid.

“We work within a politically sensitive landscape and that inclusion of pole dancing within the festival would pose a reputational risk that we do not wish to incur.”

Miss Anderson, 29, said: “I have been running classes in Brighton and Hove for more than three years now and teach men and women from the age of 16-57, ranging from students, to mothers, doctors and nurses.

“Pole fitness is now more accepted than it has ever been, yet we are been told it is still unacceptable for Brighton and Hove to showcase free pole fitness classes to the general public, in a fitness-based environment.

“They also neglected to see that pole fitness classes have been run from their facilities over the years and their sudden change of heart comes as a massive shock to all.”

Today the council stood by its position. Assistant chief executive Paula Murray said: “We are aware of differing views among residents around pole dancing.

“However, our Take Part festival focuses not only on encouraging people to be more active but also on promoting positive body image.

“This is an important and sensitive issue for many people and for young women in particular.

“Within this context we do not feel including pole dancing in the Take Part festival would be the right thing to do.”

Miss Anderson said that she would now be starting a petition urging the council to let them participate in the festival.

In 2008, a Pole Dancing Passion class was banned from the King Alfred Leisure Centre in Hove for being “inappropriate”.