A four-metre barricade is being put up around the decaying Madeira Terraces today as the city council warns they will be closed “for many years”. 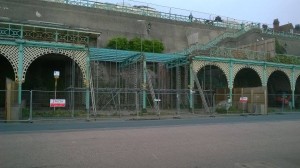 Seafront development manager Toni Manuel wrote to traders on Friday to inform them parking bays are to be suspended for three days while the road layout is reconfigured.

She explained the fencing was being moved forward to keep people away “in case of a collapse” for the whole length of the structure.

Some of the walkways and the galleries and restaurants will remain open, as will the road itself.

Ms Manuel explained: “Surveying has shown that the steel beams embedded in the concrete supporting the deck of the terraces have corroded and the cast iron has come to the end of its useful life.

“Cast iron is brittle and with no movement joints along the length of the terrace over the years the cast iron has cracked.

“This cannot be repaired and would require totally rebuilding.  This means fencing is likely to be in place many years while a solution is found and funded.

“I appreciate that this will not be welcome news and I dearly wish there were a viable alternative to this course of action.

“However, please be assured that the council is working to mitigate the impact of the closure of the terraces wherever possible to ensure access is retained and Madeira Drive can continue to be a popular destination for both visitors and residents and a sought-after event venue.” 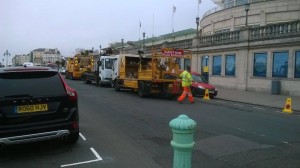 Neil Sykes, secretary of the Brighton Seafront Traders Association, who also runs the Modern World Gallery on Madeira Drive, said: “My main concern is the severe impact that closing the terraces is having on footfall, equating to virtually none.

“Although it is clear that the works are now essential, nothing has been done to assist the traders down here.

“For example, today I have not had one customer through the door, and that is becoming all too common.

“The initial closures last year, led to a severe impact and reduction of trade. This year has seen that reduce even further, people that park on the terraces side, have no other choice, than to cross to the sea side, and they do not cross back over, as there is no provision for them to do so.

“I have been informed that the expected/estimated time for the works to be completed is ten years.

“Businesses such as mine cannot survive another year, unless a plan of action is implemented as soon as possible.”

Ken Frost, a director of OhSoSwedish which trades on the seafront to the east of the Palace Pier, said the eastern side of the seafront was suffering from neglect while the western side was regenerated.

He said: “With regard to the general decay of the seafront on the east side of the pier (eg unpainted railing, dilapidated areas, pavement cracking etc) it is clear that the council only has eyes for the west.

“Grants etc that have been awarded to Brighton have not, as far as I can see, been spent on the east side.

“Why? Where has the money gone, and why has it not been spent in part on the east side?”

And planning consultant Ian Coomber, who is working for both the Brighton Wheel and the Soho House project at the Aquarium Terraces, also called on the council to back those schemes to bring the eastern side back to life.

Labour councillor Gill Mitchell, who chairs the seafront scrutiny panel, said the party would be making repairs to the seafront a priority now it has the most seats on the council.

She said: “The full scale of the repair work needed to the Madeira Terraces has just become clear and is made more worrying by the fact that there is currently no funding solution for their restoration.

“As a priority we will be assessing all options so that this area of the seafront can once again be fully enjoyed by residents and visitors and seafront traders.”