Pub giant J D Wetherspoon’s plans to open a branch in the old London Road Co-Op have been turned down by planning officers. 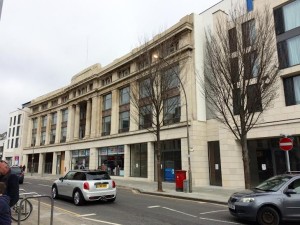 Head of planning Martin Randall refused the application on the grounds it would be a loss of retail space and would create a noise nuisance.

The pub company says it respects the decision, although it may yet appeal. But in the meantime, the news has been welcomed by residents.

Andy Winter, chief executive of the Brighton Housing Trust which has offices and homes nearby, and who had pledged the “mother of all fights” against the plans, said he was overjoyed at the news.

He said: “It’s fantastic news for London Road. The last thing we needed was another large drinking establishment in this area.

“I hope Wetherspoons have got the message loud and large that they were not wanted in London Road.

“I’m overjoyed by the decision of planning officers.”

A spokesman for J D Wetherspoon said: “We are very keen to open a pub on that site. However, we respect the views of the planning authority.

“We will now decide whether to appeal the decision or not, but it will be a little while before we make that decision.”

As part of the four reasons for refusal, Mr Randall said: “The proposal would have an adverse impact on the vitality, viability and character of the London Road Town Centre.

“The applicant has failed to demonstrate that the use would not cause a noise nuisance or increase in disturbance by reason of people leaving the premises late at night and dispersing to other destinations.”

He added: “The proposed … recessed seating area, balustrading and plinth, folding aluminium doors and air intake grills, would result in an incongruous shopfront which would be of harm to the character and appearance of the locally listed retained façade.”