A man’s was pulled from the water by beach lifeguards after he was spotted face down in the water off Hove Lawns this afternoon. 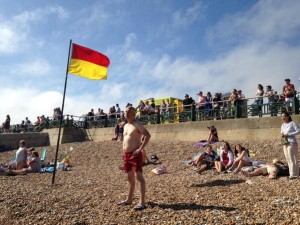 The Brighton Lifeboat was launched at 4.24pm after receiving reports of the man face down 400m west of the West Pier, as thousands of people attended Paddle Round the Pier on Hove Lawns.

As they combed the water, the lifeguards conducted a shoreline search. A beach lifeguard found the man and got him to the beach where they started CPR.

The lifeboat helmsman made the decision to beach the Atlantic 85 so its volunteer crew could also provide medical assistance to the unconscious man.

A full medical was carried out by the lifeguards, Paddle Round the Pier team and volunteer crew, and the man was passed over to South East Coast Ambulance Service.

However, Brighton and Hove News understands the man was still in a serious condition when he was taken to the Royal Sussex County Hospital for further treatment.

Helmsman Daniel Gurr said: “This was brilliant team work between Brighton beach lifeguards and the volunteer crew of Brighton lifeboat. I would also like to say my thanks to the 20 passers-by and beach lifeguards that assisted in getting the lifeboat back into the sea.”

A woman who was on the beach with her parents during the rescue said it was a “shocking ordeal”.

She said: “I was sat on the beach with my parents and we saw a lifeboat and lifeguards searching for about 20 minutes before they eventually pulled an unconscious body out of the sea.

“They were practising CPR for what seemed like a lifetime but then they did bring him back. We all thought he was dead as he must have been in the water for so long but then we heard afterwards that he was brought back.

“It was a shocking ordeal.”