Brighton RNLI lifeboat crew rescue another drunk from the drink

The RNLI Brighton lifeboat crew have rescued a man who went into the sea after he had been drinking early this morning (Saturday 4 July).

He went in to the water fully clothed and refused to come out so – at 5.45am – Sussex Police called for help from the coastguard.

The Brighton lifeboat crew have been called out four times in the past month to fish men out of the water when they’ve gone in the drink in drink.

The latest rescue prompted one crew member to say: “Think before entering the sea.”

The RNLI volunteers of Brighton were called out after the man was spotted near the Palace Pier. 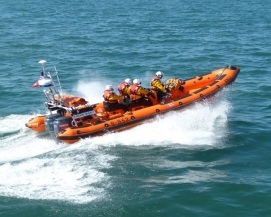 “With the man’s health deteriorating due to a mixture of alcohol and cold water shock the helm decided to beach the Atlantic 85 to allow the crew from South East Coast Ambulance Service provide the medical attention the man required.

Crew member Jade Cohen said: “The crew were paged this morning at 5.45am after receiving a call from Sussex Police informing coastguard that a male had entered the water fully clothed and refusing to come out.

“Once on scene and gaining the man’s trust the gentleman was brought on to Brighton lifeboat where a full medical assessment was carried out.

“The gentleman was then taken off to Royal Sussex County Hospital for further medical assistance.”

“This is our fourth shout in a month to an intoxicated male. We are urging all party-goers not to go in the sea after a night out as can be very dangerous.

“Today the gentleman was very lucky with the quick response from Sussex Police, Brighton Seafront Office, Shoreham Coastguard and the crew from the lifeboat.”

The RNLI is currently running its annual Respect the Water campaign. It aims to educate people about the potential dangers of entering the sea without checking conditions, without proper equipment and precautions or while under the influence of alcohol.