A Portslade pub which was set to become a Morrison’s supermarket could now be demolished and houses built on the site.

Developers have submitted plans to knock down The Mill House in Mill Lane, which gives its name to a bus stop, and build eight homes in its place.

Plans submitted by Morrison’s to turn it into a supermarket were approved last year, but property developer TFRE2 Ltd says this is no longer an option.

The application, written by planning consultants Stiles Harold Wilson, says: “The public house is currently closed and the windows have been boarded up with security panels.

“It has been vacant since July 2014 and until recently was considered for conversion to a retail unit. This planning option is no longer current and hence the applicant now proposes a more sensitive housing use.” 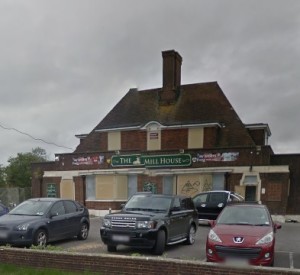 It adds: “It is considered that the [pub] is a bad neighbour as evidenced by the planning history and concerns about noise and disturbance. It is further understood that towards the end of the pub use reports of anti-social behaviour and a propriety of crime didn’t make the venue welcomed by the local community.”

The eight homes would consist of six terraced houses and two semi-detached, and would include parking spaces and gardens.