The controversial Valley Gardens scheme has been delayed until at least October for new traffic modelling examining how the new road layout will deal with weekend and bank holiday traffic. 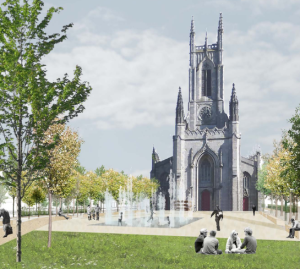 The original traffic modelling for the scheme, which will see traffic reduced to a single lane from St Peter’s Church to the Old Steine, concluded it would be neutral – but only took into account data from weekdays as fluctuating weekend traffic was deemed too unreliable.

As part of its promised review into the scheme, the new Labour administration has ordered a second report which takes the weekend traffic into account.

But the Greens, who commissioned the original report, say prioritising the road for excessive holiday traffic would simply turn it into a car park, and say the extra delay could threaten funding for the scheme.

Labour’s environment and transport chief Gill Mitchell said: “Since it was first proposed a couple of years ago, the scheme has undergone some very radical changes, most radical is reducing each side to one lane in each direction.

“Labour councillors had serious concerns before the election about where the displaced traffic goes. We were very worried about taking that amount of traffic out of a key arterial road.

“We kept on being told it was traffic neutral, but it can only be neutral if a significant amount of traffic is displaced.

“What we have now called for, and what is underway, is some further modelling on exactly those issues, looking at the possibility of queuing and congestion on Lewes Road and London Road, looking at junctions to see how they will work, and specifically looking at the single southbound lane proposed.”

She said the impact of starting construction while other major projects in the city were underway, such as Circus Street, the Royal Sussex, Preston Barracks and the demolition of Amex House, would also be examined.

She added: “[Council leader] Warren Morgan and myself met with officials from the Local Enterprise Partnership [which is funding the scheme] early on after the election and they have granted us additional time to make these further checks.

“I have made a commitment to the LEP that we will be making a decision in October and I will be held to that.

“If it does throw up significant issues we can’t take something forward in the full knowledge that it’s not going to work.”

But Cllr Pete West, the Green’s environment spokesperson, said his party’s adminstration had looked at “numerous” deisng options based on “considerable evidence”.

He said: “We weighed the pros and cons of each and came up with a plan which will improve this area as a public park and as a transport corridor and which balances the provision for walking, cycling, public transport and general traffic.

“Labour have voiced concerns about the reduction of some road space for general traffic in the design, however the traffic modelling suggests that the simplification of ten junctions and a clearer layout will reduce the amount of stop-start motoring and improve traffic flow in spite of this.

The project report to Capital to Coast, who awarded £14million funding for the scheme, said this simplification will enable private vehicles and public transport to operate more efficiently.

“Exceptional sunny Bank Holidays and weekends, when thousands flock to the beach, have always and will continue to cause traffic jams, whatever is done at Valley Gardens, because the whole city has limited space for so many cars.

“However, to prioritise Valley Gardens as a stacking space for occasional heavy traffic days would be an appalling prospect turning it into a sort of car park which would threaten the other benefits of the scheme.

“As the city grows and visitor numbers continue to increase, we need to nurture the current trend for more local journeys by foot, bike, bus and taxi and more arrivals by train and coach.

“The Valley Gardens scheme promises to make an important contribution to this shift while helping general motor traffic to flow better. Labour’s continued scepticism and delay can only undermine what is widely viewed as an excellent scheme for the city.”

The scheme currently has two northbound and two southbound lanes for general traffic on the eastern side of the valley.

On the western side, the scheme includes a north and southbound lane for buses and taxis.

Initially, the scheme included two new sections of road to accommodate four lanes of traffic – two in each direction – along the eastern side of the valley.

But the four lanes were cut to two after modelling showed the simpler layout meant a better flow and therefore less space was needed at junctions for queuing traffic.

The design work for the park area is also being revised so that the Mazda fountain can be retained after more than a thousand people signed a petition calling for its retention.

However, it’s possible that the Green and Tory groups on the council may yet unite to outvote any changes to the scheme proposed by the minority Labour administration.