Work starts today on a busy stretch of the A259 Brighton seafront road with the prospect of delays over the next two years.

A lane will closed along a 100-yard stretch of King’s Road by the bottom of West Street – for about 50 yards each side.

The road is being repaired and the Shelter Hall on the lower prom is being rebuilt to make it safe as part of a £10 million project.

Brighton and Hove City Council said before Christmas: “Preparations are under way to close a short section of one lane westbound on the seafront carriageway from (Monday) 4 January for the Shelter Hall project and for work to take place under the A259. 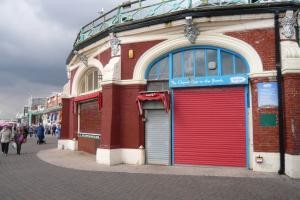 “The lane will be shut for a distance of about 50 metres either side of the bottom of West Street.

“The junction will include a dedicated filter for right turns into West Street for westbound traffic. Access to Churchill Square and car parks will be kept open.

“Traffic travelling southbound down West Street and heading west on the seafront will need to turn right on Russell Road and use the Cannon Place/A259 junction.

“Advanced warning signs have just gone up on the seafront. The council will be closely supervising the works to make sure there is minimum disruption to the public, businesses and public transport.

“Shared pedestrian and cycle access along the upper prom will be maintained at all times as will access to the lower prom.

“Work to reconfigure the lower promenade is on schedule and foundations are being put in place for the construction of the seawall. This phase is expected to be completed by the end of March, weather permitting.

“Brighton and Hove was one of only a few councils to win funding from the government’s Highways Maintenance Challenge Fund, securing £9 million to undertake the work which will also save the seafront road from collapse and protect it for the future.

“The total £10 million project involves rebuilding the historic Shelter Hall (a Victorian building originally designed to shield bathers from bad weather and hot sun) to become a flagship commercial location for the 21st century, creating a new walkway on the beach, enlarging the upper prom area and building new public toilets on the seafront.

“The Shelter Hall also extends under the A259, one of the major routes in and out of the city.

“Due to the age of the structure and complexity of the construction, the lane closure is expected to be in place for two and a half years.

“Traffic management will be co-ordinated with an overall plan that takes into account other major schemes in the city.”

Councillor Gill Mitchell, who chairs the council’s Environment, Transport and Sustainability Committee, said:  “The rebuilding of the Shelter Hall and work to strengthen the A259 is absolutely essential for the future of our seafront and the road, which is the major coastal route through Brighton and Hove.

“We need to do the work to protect these assets into the next century.

“(The) Shelter Hall marks the first stage of investment in the seafront’s infrastructure which is urgently in need of restoration and regeneration.

“This project, largely funded by the government, is on schedule and on budget and is a key part of securing our seafront economy.”

The Shelter Hall is part of the historic seafront arches, the council said. It was built in the 1880s at 150-154 King’s Road Arches and supports the upper promenade and the road and is currently in very poor condition.

The council is contributing nearly £1.7 million towards the scheme from its Local Transport Plan funding.

The project will be overseen by the team behind the award-winning seafront arches restoration near the i360.