Two mums from Brighton have started a petition urging the council to make their local children’s park safer.

They were told that no funds had been allocated for repairs this year by Brighton and Hove City Council.

They said that a third of the play equipment is broken at Farm Green Park, the only park in Lower Bevendean, while the rest is run down.

The asphalt floor surfaces are covered in mould and have deteriorated to the point that parents are complaining that their children are slipping or tripping up on it. 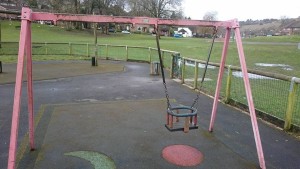 Jayne Van Rensburg, a mother of two, first contacted the council’s CityParks department last September to ask if they could update the play equipment. She was told that there was no budget to do so.

She contacted CityParks again in November to ask if they could assess the safety of the park’s equipment. She was concerned about the level of deterioration of the park and the potential risks that came with this.

“The monkey handlebars are broken and to be honest completely age inappropriate and too high for primary school age children that use the park.

“The entire playground is covered in a layer of green moss and is extremely slippery.

“Considering that this playground is extremely popular and therefore has a very high usage, the facilities provided are very poor.” 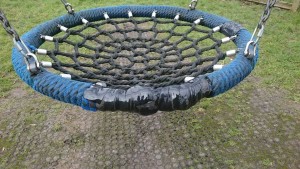 CityParks administrator Helen Loughnane said at the time that the department was about to embark on a review of the condition of all Brighton and Hove play areas to assess their condition.

The aim was to produce a forward plan for play provision and work with local communities to help make improvements.

An email from Helen Loughnane ended by promising updates but, Jayne Van Rensburg said, there has been no communication since. 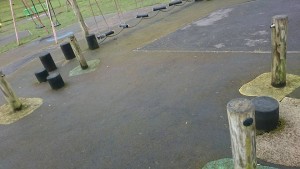 Jayne Van Rensburg said: “Bevendean is the forgotten corner of Brighton. The council’s lack of action to maintain the playground has led to a slow decline rendering the park almost derelict, unsafe and with families unwilling to use it.

“This has led to destruction and vandalism of the remaining equipment. However, Bevendean is a family orientated area full of people committed to improving the area and we will do what we can to ensure that our children have a safe, exciting and challenging place to play.”

She started a petition on paper and has since set up an online petition with fellow Bevendean mother Claire Jacobs.

The pair aim to present it to a meeting of the full council on Thursday 24 March.

The mums have been using social media, including Facebook, to try to reach their target of 1,250 signatures in the short time remaining until it’s presented. 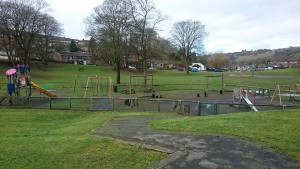 Both intend to carry on with their campaign to improve the park regardless of the outcome at full council as it is a cause that they are passionate about.

Jayne Van Rensburg said: “It seems that because the area is economically disadvantaged this playground seems to have been ignored totally.

“Bevendean is a family orientated neighbourhood with a supportive community and we are disillusioned by the degradation of the playground on Farm Green rendering the park almost derelict. It is impractical, unsightly and more importantly unsafe.”

Brighton trains will not stop at London Victoria over Easter break