Two rowing first class passengers were thrown off a commuter train at Hove Station yesterday morning after an early morning row in which hot coffee was thrown about the carriage. 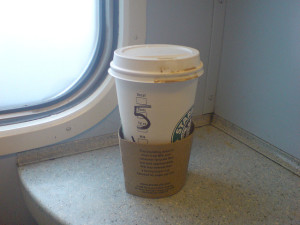 takeaway coffee on a train by Nico Hogg on Flickr

The 6.29am Littlehampton to London Bridge service was stopped at Gatwick Airport station as a result, forcing hundreds of customers to cram themselves onto the next train.

The row broke out at Hove Station at about 7.15am. Witnesses said the argument was over a seat, and that the pair threw coffee over each other.

The train was kept waiting at the station for almost half an hour while police dealt with the incident.

Thanks to the 2 men who threw coffee over each other, causing my train to be canned from Hove to London Bridge #southernfail #coffeegate

@SouthernRailUK punch up in 1st class over a seat this morning made my husband late for work. More seats req’d and the men need to grow up!

A spokesman for Southern said: “I can confirm that there was a disturbance in one of the First Class accommodation areas on the 06.29 Littlehampton to London Bridge service at Hove yesterday morning.

“The police were called and spoke to the people concerned off the train. We don’t know if the people re-boarded.

“As a result of this incident, the train was 28 minutes late leaving Hove station and to ensure the timetable was not disrupted by a very late train arriving in London, the train was terminated at Gatwick Airport station where passengers boarded alternative London Bridge services to continue their journeys.”