A union is considering calling for a boycott of the i360 after jobs for photographers, waiters, bar staff and baristas at the £46m tourist attraction were advertised at the minimum wage – despite the i360 signing up as a local Living Wage employer. 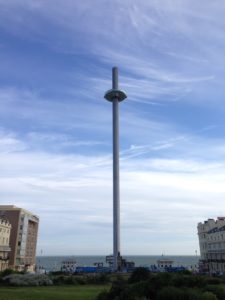 Two contractors are advertising for staff for when the viewing tower opens this summer, both offering an hourly wage of £7.20, the minimum wage – well below the current £8.25 Brighton and Hove Living Wage.

One, Heritage Portfolio, is advertising for waiting staff, bar staff and baristas, and the other, Magic Memories, for a retail sales and photography assistant.

Although rates will be topped up with tips and commission, the amount the base rate has been set at has angered the local GMB union.

Mark Turner, Branch secretary of GMB Sussex branch, said “We are very disappointed to see these jobs being advertised at well below a real living wage. It’s easy for British Airways i360 to claim to be a living wage company when they outsource low paid jobs like catering to other companies.

“GMB is calling on British Airways and Brighton council to take action to ensure everyone working on the project is paid a minimum of £10 per hour. If British Airways i360 do not resolve this issue of low pay GMB will be forced to call for a boycott of the venue.”

Although membership of the Brighton and Hove Living Wage campaign accreditation does not require that contracted staff are paid the living wage to begin with, companies are expected look at ways contracted staff pay can be brought up to the same level.

The national scheme, which the i360 is not a member of, goes further and requires members to have a plan to ensure contracted staff are also paid the living wage too.

When the i360 joined in October 2014, chief executive officer Eleanor Harris said it made sense to attract the best staff in a city where where 14% of people are employed in tourism, adding: “If visitors have a fantastic experience when they visit us, they are more likely to recommend our attractions to friends and family and to share their positive experience on social media. We believe that paying decent wages will have a direct and positive impact on our bottom line.”

This week, she said: “British Airways i360 will be directly employing approximately 60 full time and around 20 part time staff and they will all be paid at least the Living Wage. Our caterers and photography provider will decide their own pay structures appropriate to their fields of work.”

Sarah Springford, director of Brighton and Hove Chamber of Commerce, which runs the local scheme, said: “They are a very small team trying to do a lot and the local team has done some very good work.

“Obviously there’s another step to go which is making sure your subcontracted staff are paid the living wage too. I know of at least one contractor who won the bid on the basis they are a living wage employer.”

Meanwhile, the city’s licensing panel meets next Monday to decide the i360’s application to sell alcohol from 9am to 11.30pm, and serve food and stage live performances, films and recorded music until midnight.

However, the i360 is in the city’s cumulative impact zone, where the presumption is that new licences will be refused. In recent months, applications from the Synergy Centre and Silo have been turned down as a result.

Both the council’s licensing manager Jim Whitelegg and Sussex Police wrote to register concerns about the application, although neither put in an official objection.

Sussex Police said that after the venue agreed a list of strict conditions it was not putting in an official objection but remaining neutral, and Mr Whitelegg said that he thought the conditions meant that the i360 had proved exceptional circumstances and invited the panel to approve the application.