Results from the new average speed camera on Marine Parade show that 99 per cent of drivers are not speeding – but the 1 per cent who are will escape a fine for the time being. 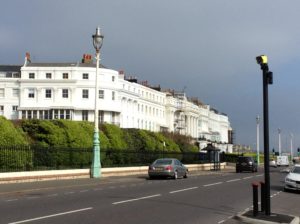 The cameras were switched on last Tuesday, but the Sussex Safer Roads Partnership said today that enforcement would not start until a later date, yet to be announced.

Operations manager Mark Trimmer said: “Following the recent installation of the Average Speed Camera scheme into Brighton early indications is that compliance is over 99 per cent.

“We are really encouraged by how the public have responded to the scheme and how they have shown their general support for this road safety measure. We feel that our aim to be open and transparent when publicising new schemes has been successful by these early results.

“We promoted the start of installation, with press releases, together with advising when the scheme went live. In addition we have also placed a variable message sign on the side of the road to make road users aware of the schemes operation.

“These are in addition to the normal provision of enforcement warning signs and I would reiterate that all of the equipment complies with Home Office type approval requirements for enforcement purposes.

“This mirrors the approach we took with the A23 improvement works at Handcross. We will, of course, communicate when formal enforcement is due to take place.”