Funding deal agreed for hundreds of homes in Brighton

A funding deal has been agreed to pay for the building of hundreds of homes in the centre of Brighton.

The deal, along with a crucial land swap, means that work on the £130 million scheme in Circus Street can switch from demolition to construction.

Initial piling work will be followed by the start of homes being built in the late summer or early autumn.

The scheme to build 142 flats and 450 student bedrooms on the site of the old fruit and veg market has been more than 10 years in the making.

The site will also include 30,000 sq ft of new office space plus workshops offering start-up space for creative businesses – and room to grow.

The scheme includes a public square, with restaurants and shops targeted at independent traders.

The developer hopes that this will create “an exciting new retail and leisure destination for the city”.

And the arts organisation South East Dance will have its headquarters in Circus Street which will also house studio space.

The revival of Circus Street – described as a public-private partnership between U+I and Brighton and Hove City Council – has also been supported by the Greater Brighton Economic Board.

Brighton University has sold its old art college building as part of the scheme while buying the old council car park, on a neighbouring plot, potentially for future student use. 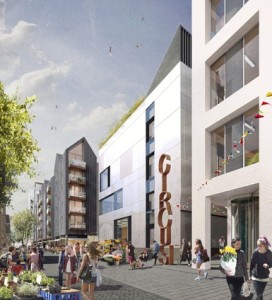 The Circus Street scheme, designed by architects Shedkm, with TP Bennett, is expected to create more than 400 jobs and inject £200 million into the local economy over the next ten years.

The council said: “British firm Henry Construction has been appointed as contractor, standing out for their emphasis on offering local jobs and apprenticeships for young people on the construction.

U+I deputy chief executive Richard Upton said: “This is a major milestone for our Circus Street regeneration project and for Brighton at large.

“This truly mixed-use project will transform a long-overlooked site, creating a vibrant new place and bringing substantial cultural and socio-economic benefits to this creative and energetic city.

“We are thrilled to be under way with construction, moving closer to fulfilling our ambition to deliver for Brighton a meaningful regeneration project that will revitalise the local area.” 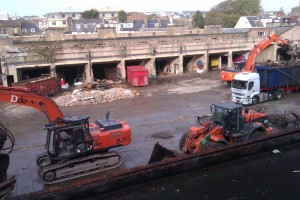 Council leader Warren Morgan said: “It is great to see progress continuing on this important scheme in the heart of the city.

“Many people stand to benefit from the new homes, jobs and business spaces, alongside new community and cultural facilities.”

Gravis Capital Management director Tom Ward said: “We are pleased to have the opportunity to partner with U+I for the delivery of this exciting development which will deliver high quality new homes, purpose-built student accommodation and commercial premises in the heart of Brighton.

“We look forward to working with U+I to ensure the long-term success of this project and to exploring further opportunities to work together in future.”

With piling currently under way, most of the buildings on the site are expected to be completed in 2019.