Plea for safer crossings after crash death in Hove

A plea is to be made for safer crossings after a woman died in Old Shoreham Road, Hove, last Saturday.

Cathy Akehurst, 85, lost her life in a crash near the corner of Weald Avenue and Lullington Avenue when she was hit by a car.

Councillors fear others are at risk along the busy road including hundreds of local school children who cross the road every week day.

They are preparing to make their case for two new crossings at a meeting of Brighton and Hove City Council in the coming months.

They want one near the top of Lulllington Road for children coming through the tunnel at Aldrington Station and the other by the entrance to the north side of Hove Cemetery.

Councillor Dawn Barnett said: “When all the children come up Olive Road they cross the Old Shoreham Road to cut through the cemetery on their way to school and going home again.”

She said that hundreds of children came from south of the railway line to Blatchington Mill and Hove Park secondary schools as well as primaries such as Aldrington and Goldstone.

Councillor Barnett said: “You also get a lot of older people on mobility scooters coming to pay their respects to loved ones in the cemetery too.”

She said that they couldn’t always make it all the way across because of the traffic but the central section of the road was too small for their scooters.

She said that it would be safer to have a proper crossing instead of the current unsatisfactory traffic island in the middle of the road. 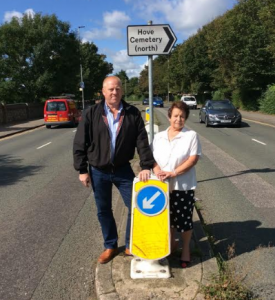 Councillor Nick Lewry, who also represents Hangleton and Knoll Ward on the council, said that the number of children crossing the road could grow when the King’s School moved.

He said that their colleague Councillor Vanessa Brown had campaigned for a crossing before Mrs Akehurst’s death a week ago.

Councillor Lewry added: “It’s bad enough that an old lady died last week. It would be a tragedy if a school child died along here too.

“One death is one too many.”

Councillor Barnett has long spoken out about speeding cars along the Old Shoreham Road, Hove.

On the same road just west of her ward another pedestrian died last year. Anthony Parsons, 54, was hit by a car in April near the corner of Benfield Way.

And in November another pedestrian, a 22-year-old woman, lost her baby and suffered life-changing injuries in a crash at the same spot.