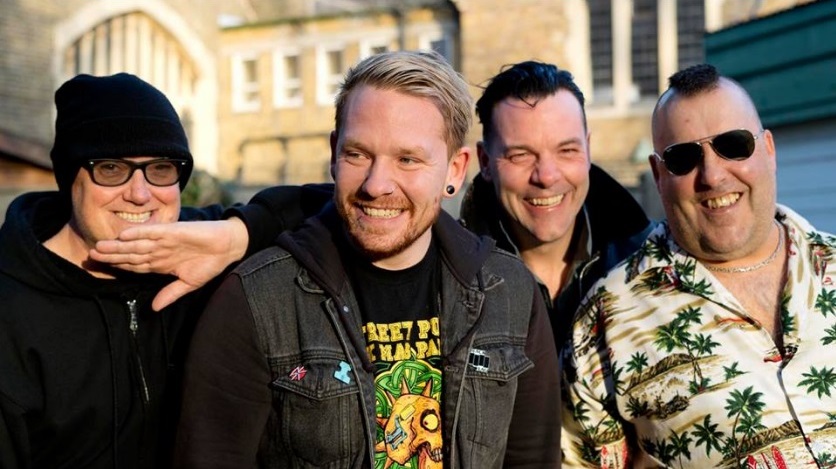 After a couple of rehearsals, they made their first recording, the controversial (but wickedly funny) ‘Elvis Is Dead’ which appeared on the (sadly missed) Brighton record label Attrix compilation ‘Vaultage ‘78 – Two Sides Of Brighton’. This was the first of three annual compilations of the cream of Brighton new wave bands. The labels shop was located in Sydney Street in Brighton and was the brainchild of Rick Blair. The others obviously being ‘Vaultage ’79’ and ‘Vaultage ’80’. 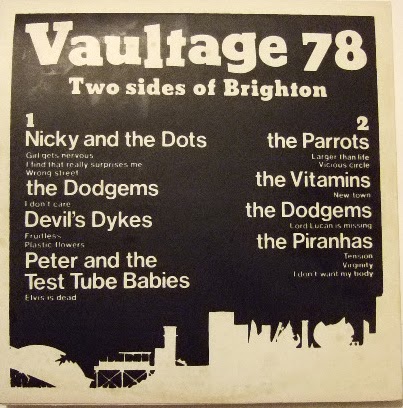 The back cover of the Vaultage 78 album

Also appearing on the seminal ‘Vaultage ’78’ disc was ‘Tension’ and ‘Virginity’ by The Piranhas and the timeless ‘Lord Lucan Is Missing’ by The Dodgems. If you would like to find out more about Attrix Records, then you can do no wrong by visiting this site: https://www.punkbrighton.co.uk/attrec.html 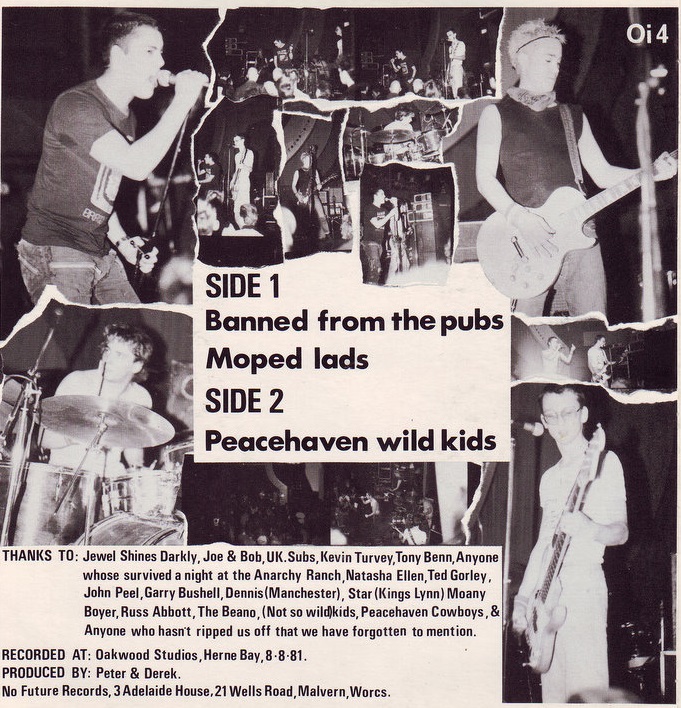 In 1982, their first single ‘Banned From The Pubs’ (backed with ‘Moped Lads’ and the aforementioned ‘Peacehaven Wild Kids’) followed on No Future Records, and fans and press freaked out in equal measure. From that moment, everything went crazy, sold out concert halls in England and Europe and their big success in the media pushed their live debut album ‘Pissed And Proud’ to #1 in the English independent charts in 1982. The long-awaited raw energy album finally had the songs that we had been witnessing live at gigs all around Brighton and London, with such ditties as a live version of the ‘Run Like Hell’ single, the sinister/comedic ‘Transvestite’ and the groovy boot-wrapped-around-yer-head ‘Disco’.

Directly after that, in 1983 ‘The Mating Sounds Of South American Frogs’ was released – a must have for every record collection – and sold more than 100.000 copies, resulting in invitations from far and wide. The Test Tube Babies played shows all over the world and cemented their status as one of the most brilliant and funniest live bands in punk rock culture. They also had the honour to represent the United Kingdom at the historical MTV East/West party to celebrate the fall of the Berlin wall. 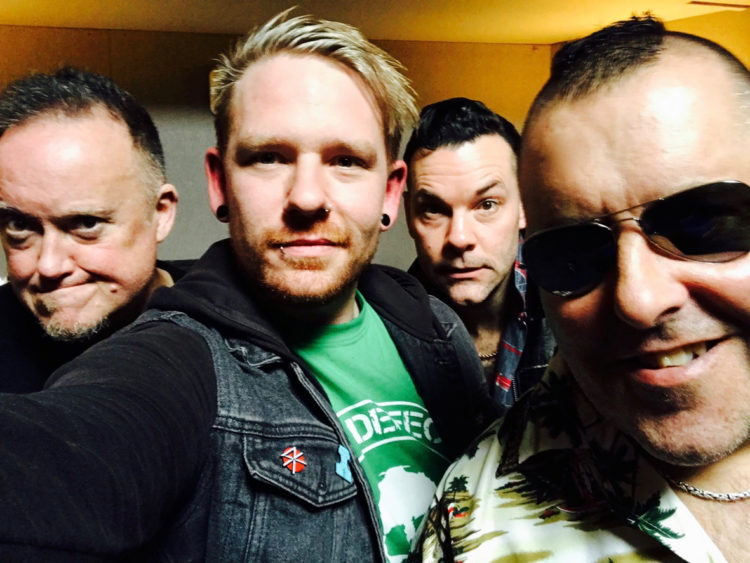 A few bass players and drummers have served their time in the band, but the songwriters Peter & Del have always been the foundation of Peter & The Test Tube Babies and together wrote records like the 1986 album ‘Soberphobia’, and the brilliant ‘Supermodels’, which brought them their comeback in 1995.

In 2005 the 18-track DVD ‘Paralitico’ was released, followed triumphantly in the same year by the ‘A Foot Full Of Bullets’ album and the following year by the ‘For A Few Bullets More’ album, which had guest appearances of Campino (Die Toten Hosen) and Olga from The Toy Dolls. All three products sold out worldwide. 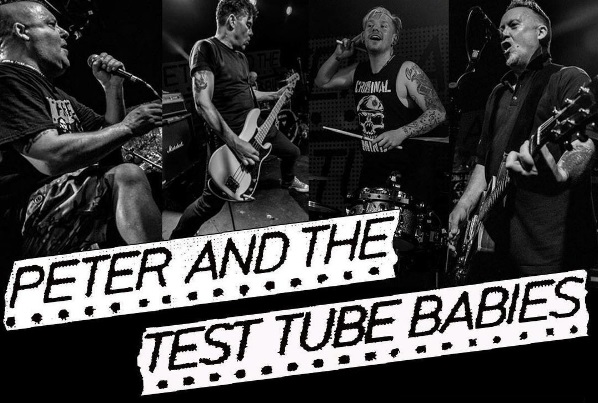 However, constant touring around the world made it nearly impossible to record a new record, until the day when Lars Friedrickson from Rancid told Peter at the Rebellion festival and Campino told Del in a hotel bar in Stuttgart: “I’m in need of a good, new Test Tubes album”. Del and Peter didn’t need to be told twice. Recruiting Nick Abnett and Sam Fuller on bass and drums respectively, was a master-stroke giving The Test Tube Babies the impetus to create arguably their best album ever – the highly acclaimed ‘That Shallot’, which was released on 15th September this year. 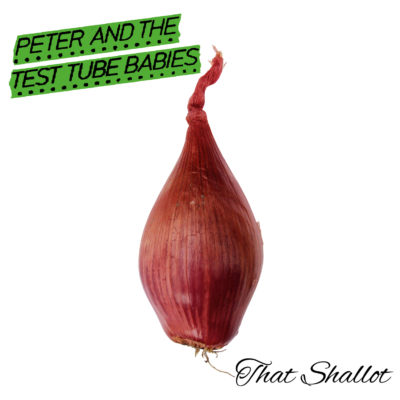 The album features not just one, but two decent singles – ‘None of Your F**king Business’ and ‘Crap Californian Punk Band’. ‘That Shallot’ is the album that the critics are raving about and the fans are buying in ever increasing numbers. Next year, will be the Test Tubes 40th anniversary year, but nothing can hold them back from going on tour again and presenting their new record ‘That Shallot’. 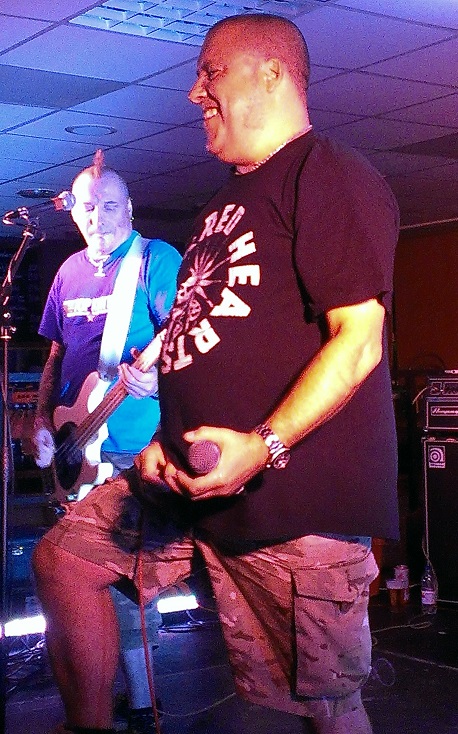 Catch these local heroes live at: