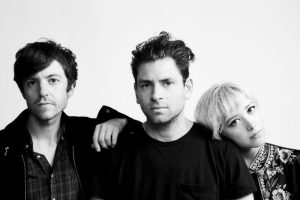 Los Angeles trio Lo Moon were thrilled to have announced the release of their self-titled debut album on Friday 23 February and now they follow it with news of two Brighton concert dates.

The guys are a real talent with this tuneful track (which appears on the album) clocking up in excess of one million views: https://www.youtube.com/watch?v=bnXkMNyc794.

The album – produced by Chris Walla (Death Cab For Cutie) and Francois Tetaz (Gotye) – features previously released songs ‘Loveless,’ ‘This Is It,’ and ‘Thorns,’ as well as guest turns by The War On Drugs’ Adam Granduciel and Charlie Hall. A new taste of the record, in the form of a seductive, synth-driven song ‘Real Love,’ is available to stream now following its worldwide Beats 1premiere.

The band are heading to the UK for a headline tour. This follows December’s sold out show at The Lexington in London, a headline performance which fell between huge shows across the UK and Europe supporting London Grammar.

Lo Moon recently recorded an NPR Tiny Desk session, which can be viewed here. Lo Moon are one of three very special artists to pioneer the inaugural Slingshot program by NPR and VuHaus, a new collective effort among tastemaking public radio music stations to discover and elevate the most promising up-and-coming artists. 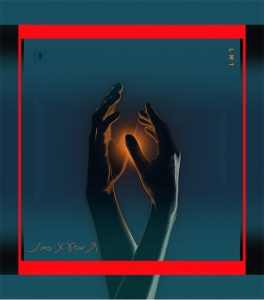 Music is the universal language for the group of people who all come from vastly different corners of the earth that comprise Lo Moon.

Singer/guitarist Matt Lowell is from Long Island, bassist Crisanta Baker is from Denver and guitarist Samuel Stewart from London. Los Angeles was their eventual meeting place.

And from this meeting place has come something astounding: Lo Moon – a dark, luscious collection of songs full of crescendo rock and sparkling electronics – spans the breadth of human highs and lows, bridging a gap between soft experimental rock and atmospheric electronic pop.

The record – a cool, dark, meditative exploration of bittersweet sadness and cathartic joy – could sit as happily among the likes of The XX as it could Talk Talk, Brighton’s very own Apt, China Crisis, Japan, Depeche Mode, early Coldplay or the cinematic scope of Sigur Ros and the quieter 1980 Gary Numan tracks.

Lo Moon made themselves at home on the road throughout last year – opening for Phoenix, The War On Drugs, London Grammar, Glass Animals, Ride, and more – and 2018 sees them rapidly becoming one of the best new live bands to emerge over the last few years.

Indeed, the New York Times’ esteemed music critic Jon Pareles called them one of the Top 10 artists he saw at Governor’s Ball 2017, alongside the likes of Lorde and Chance The Rapper. 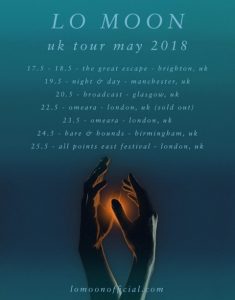