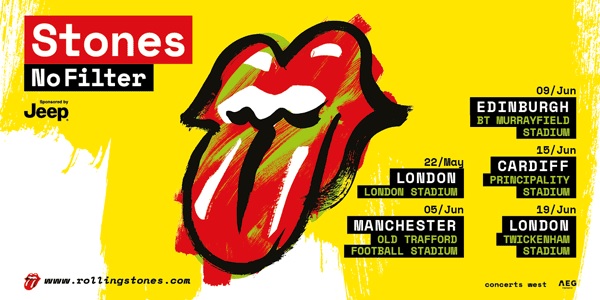 The Rolling Stones are back where they belong on home turf with five massive UK concerts in May and June – London, Manchester, Edinburgh, Cardiff and Twickenham.

Part two of the ‘STONES – NO FILTER’ tour, sponsored by Jeep®, sponsor of The Rolling Stones European tours since 2014, sees Mick Jagger, Keith Richards, Charlie Watts and Ronnie Wood continue on from their hugely successful sold out European trek in the autumn of last year.

The Rolling Stones will treat fans to a set list packed full of classics such as ‘Satisfaction’, ‘Paint It Black’, ‘Tumbling Dice’ & ‘Brown Sugar’ but each night they will include a couple of unexpected tracks and randomly selected surprises from their formidable arsenal of songs. As always when the Rolling Stones come to town they will bring a spectacular production and state of the art stage design.