IDLES two Brighton gigs have sold out – we review their forthcoming album…. 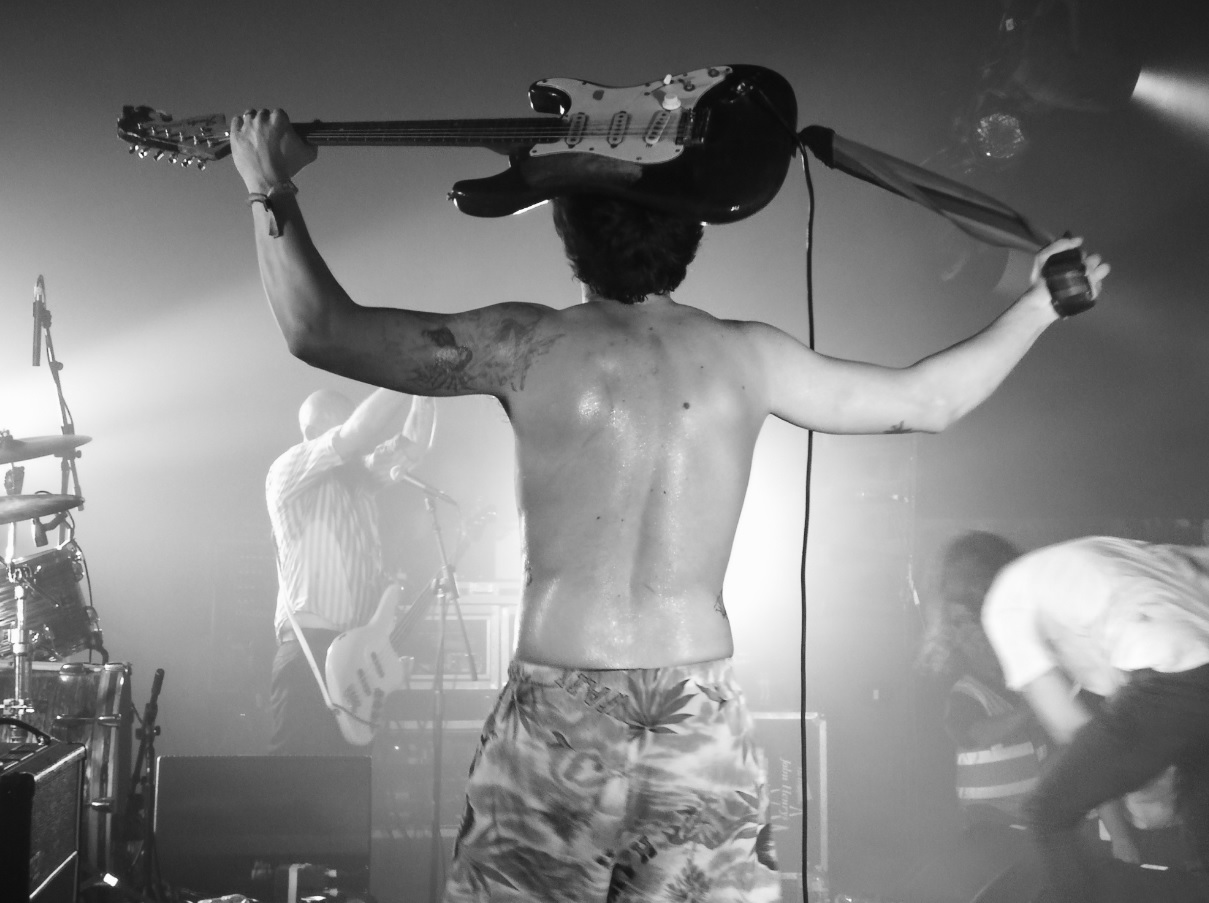 IDLES in Brighton at The Great Escape 2018 (pic Nick Linazasoro)

Not bought a ticket for IDLES Concorde 2 gig on 27th October or pre-ordered a copy the forthcoming ‘Joy As An Act Of Resistance.’ from Resident Music so that you can see them at the Komedia on 3rd September? Then you’re too late as they have both sold out. 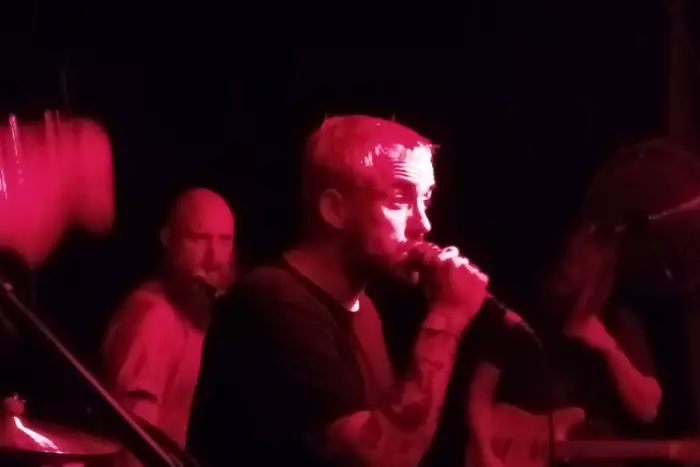 The Bristol based 5-piece have come a long way since I first saw them on the bottom of the bill supporting DIIV at the Concorde 2 in September 2016. That night my mate and I knew that they were really going places and we both turned to each other at the same time and said “What the f**k just happened!”. March 2017 saw the boys return to Brighton, but as headliners at the Prince Albert. I also witnessed that set and their mind-blowing Great Escape 2018 gig. 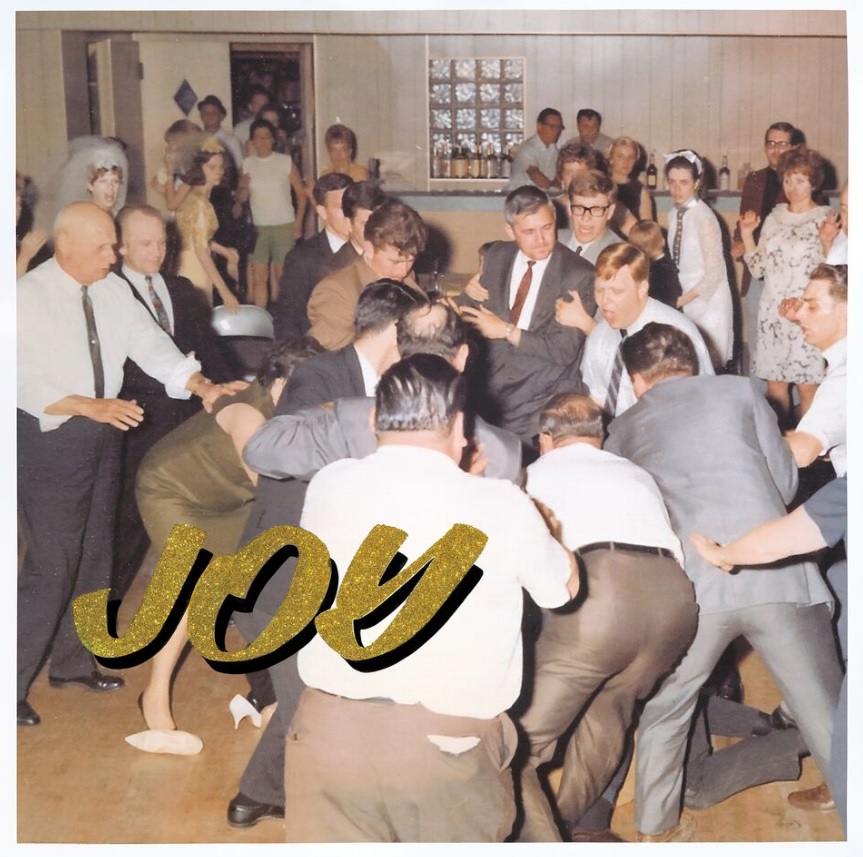 IDLES ‘Joy As An Act Of Resistance.’ album is much better than a 1970’s wedding punch-up

The lads are on the path to world domination with a 55 date tour and a follow-up album to the ground-breaking ‘Brutalism’ album in the form of ‘Joy As An Act Of Resistance.’ which will hit the streets on 31st August through Partisan Records. You can see the purchase options and pre-order details for the album HERE.

Singer Joe Talbot summarises: “This album is an attempt to be vulnerable to our audience and to encourage vulnerability; a brave naked smile in this sh*tty new world. We have stripped back the songs and lyrics to our bare flesh to allow each other to breathe, to celebrate our differences, and act as an ode to communities and the individuals that forge them. Because without our community, we’d be nothing.” 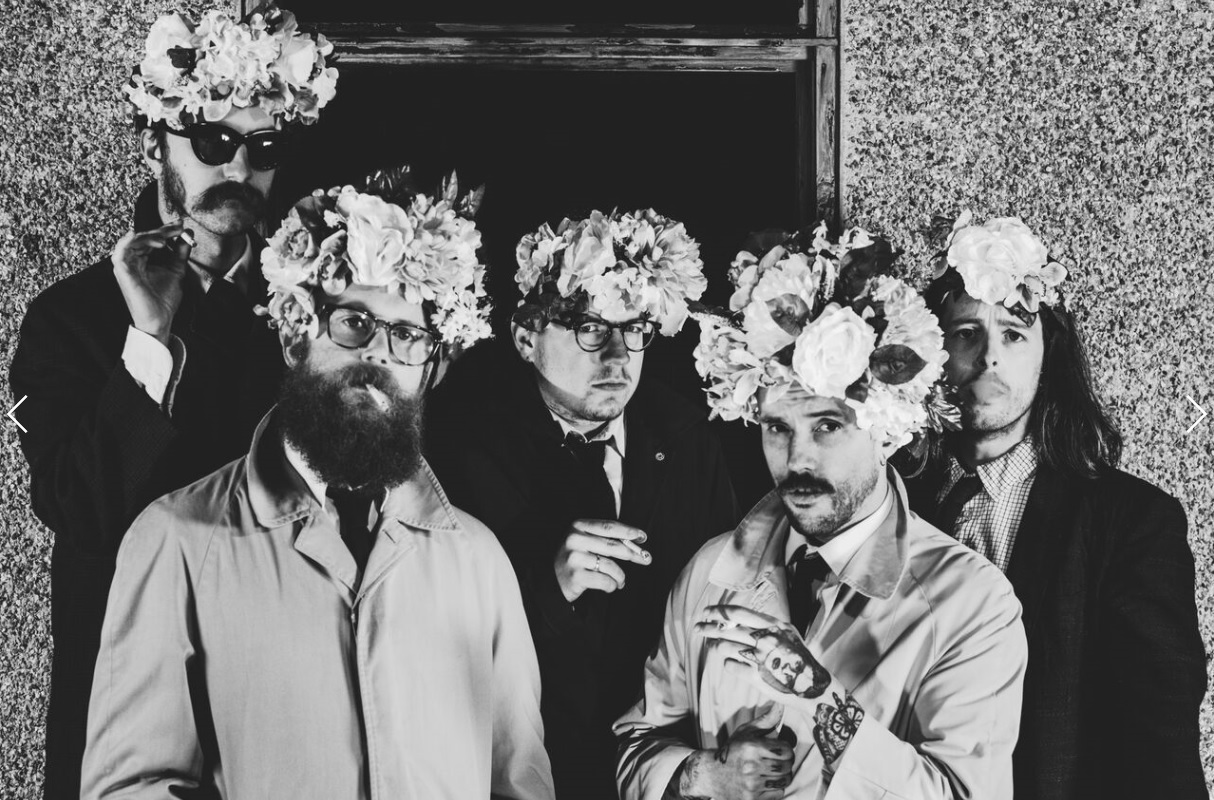 So what do we think, well here’s a track by track account, enjoy:

2. ‘Never Fight a Man With a Perm’ – Launching straight into track two with Brylcreem Nancy Sinatra stylee, as you do. Don’t you just love Joe’s lyrics, as you never know where they’re going to take you and that’s the fun of the game. The lads often switch tempos, one minute slow and then, right then lad’s we’re off and back again. You get this here, as 1:11 is not a cricket batsman’s favourite (work it out..OK then, it look like the wicket), but it sure will be an IDLES fan favourite. Concrete and leather indeed – you look like a walking thyroid. It’s here that heavy metal meets punk, so will keep both camps very happy indeed.

3. ‘I’m Scum’ – Council house chav irony with this catchy little number this dirty rotten filthy scum track. Perfect for sons of Cockney Rejects, Sham 69, and fellow followers of the Oi Oi, but with a modern conscience.

4. ‘Danny Nedelko’ – Heard this pro immigrant (Ukrainian) corker live at the years Great Escape and the crowd applauded the fact that someone was actually standing up for incoming foreign friends and not taking the pro Brexit stance or worse (BNP). Yeah we’ve gone from 53 million to over 65 million in a short space of time but the UK has become a far more interesting and colourful place because of this. Politics over, next…..

5. ‘Love Song’ – Three minute love song on an IDLES album! Surely not? Nope, “la la la la la la la” (Batman) “look at the car I bought it says I love you” and the like. More shouty vocals, swirling geetars and pounding drums.

6. ‘June’ – Hold on a minute, have I got the tracks in the wrong order as this one is starting with a pleasant (church) organ keyboard sound a la The Damned. Shouldn’t this have been the beginning of the previous track? “I swear I kissed your crying eyes”, oh blimey I think I know what this one’s about. Heart-rendering. It happened to my friends. 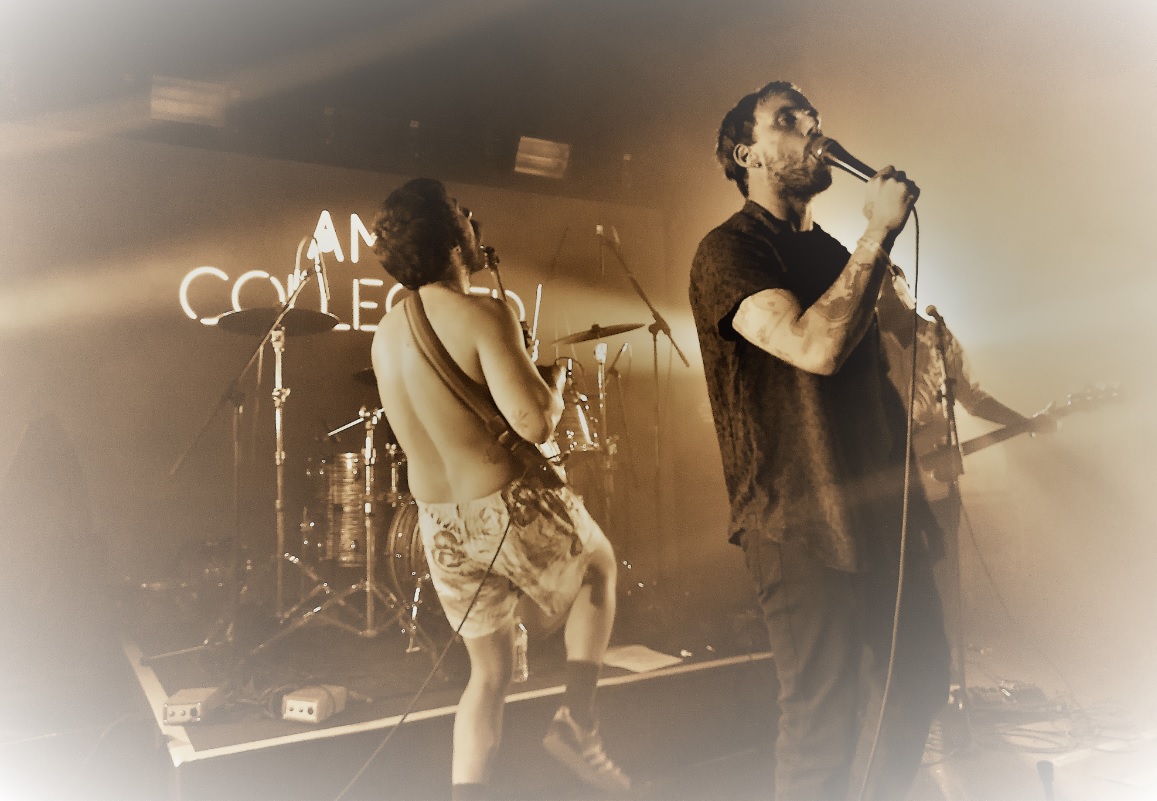 7. ‘Samaritans’ – In tune with social conscience and the human’s vulnerability. “I’m a real boy boy and I cry”. It’s really is OK to express your inner feelings and not bottle them up and suffer alone. IDLES are in touch with the excellent work of The Samaritans and understand the compilations of modern societies and gender discovery and confusion and it’s all here in this track.

8. ‘Television’ – “I go outside and I feel free, I smash mirrors and f**k tv” – the anti-tv song. Indoctrination and brainwashing of television drivel can’t get you when you are outside having a fab walk in the forest or along the beach and escape the inane mind-numbing mass media force fed worthless life destroying shows.

9. ‘Great’ – “50 inch screen in his cul-de-sac”, more tv references here. Come along one and all sing along “G-R-E-A-T”. As in Great Britain I would surmise. Yet another leg waggling stonker and it’s less than three minutes.

10. ‘Gram Rock’ – Now read that again. No it wasn’t glam rock. That would have proved an interesting topic for the boys to tackle, no doubt that Gadd word would have been mentioned, instead I think we get Gryffindor, in one short sharp demo style-tune.

11. ‘Cry To Me’ – Another short track and the album’s nearly over. Designed for you to pick up that stylus and put it back on at the beginning again. Joe’s as harmonious as he wants to be here and strangely Elvis Presley has jumped into my head. Better had to move on then.

12. ‘Rottweiler’ – IDLES normality restored with the album’s finale. It just wouldn’t be right if he was shouting out Poodle, Pug, Shih Tzu or Chihuahua would it now. Great drumming and crashing guitars on this track which is just waiting to bite you where it hurts. I suppose you notice it more as there aren’t many words in this one. The perfect track to end on before an encore. 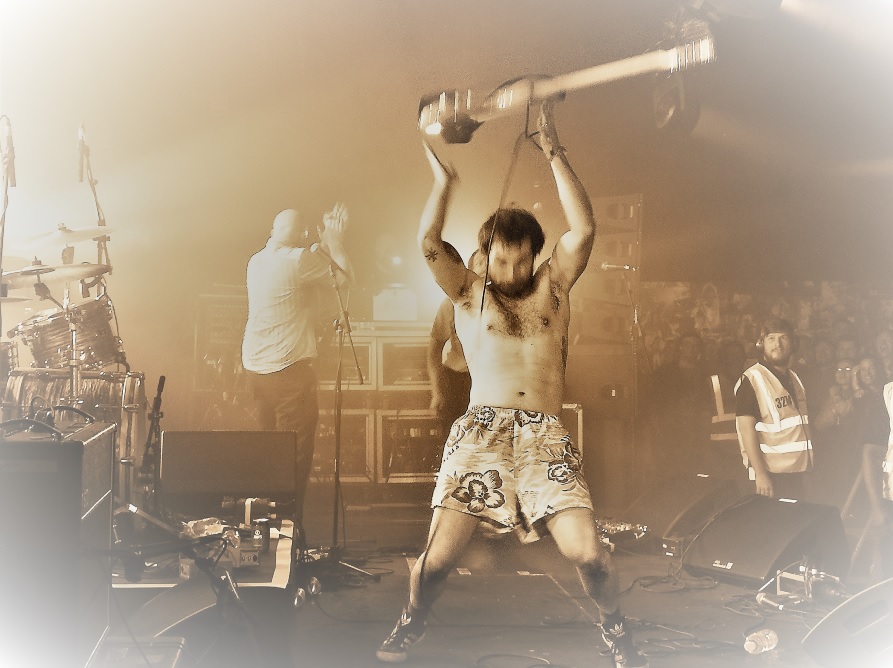 Well, there you have it ‘Joy As An Act Of Resistance.’ in review. So if you like it loud, proud, aggressive although very thoughtful and want to wrap yourself in the sound of now, then IDLES are here to save you.

(UPDATE: The ‘Joy As An Act Of Resistance’ album entered the Official Album Chart at No.5 and at No.1 in the Vinyl Album Chart – ‘Well Done’ lads!). 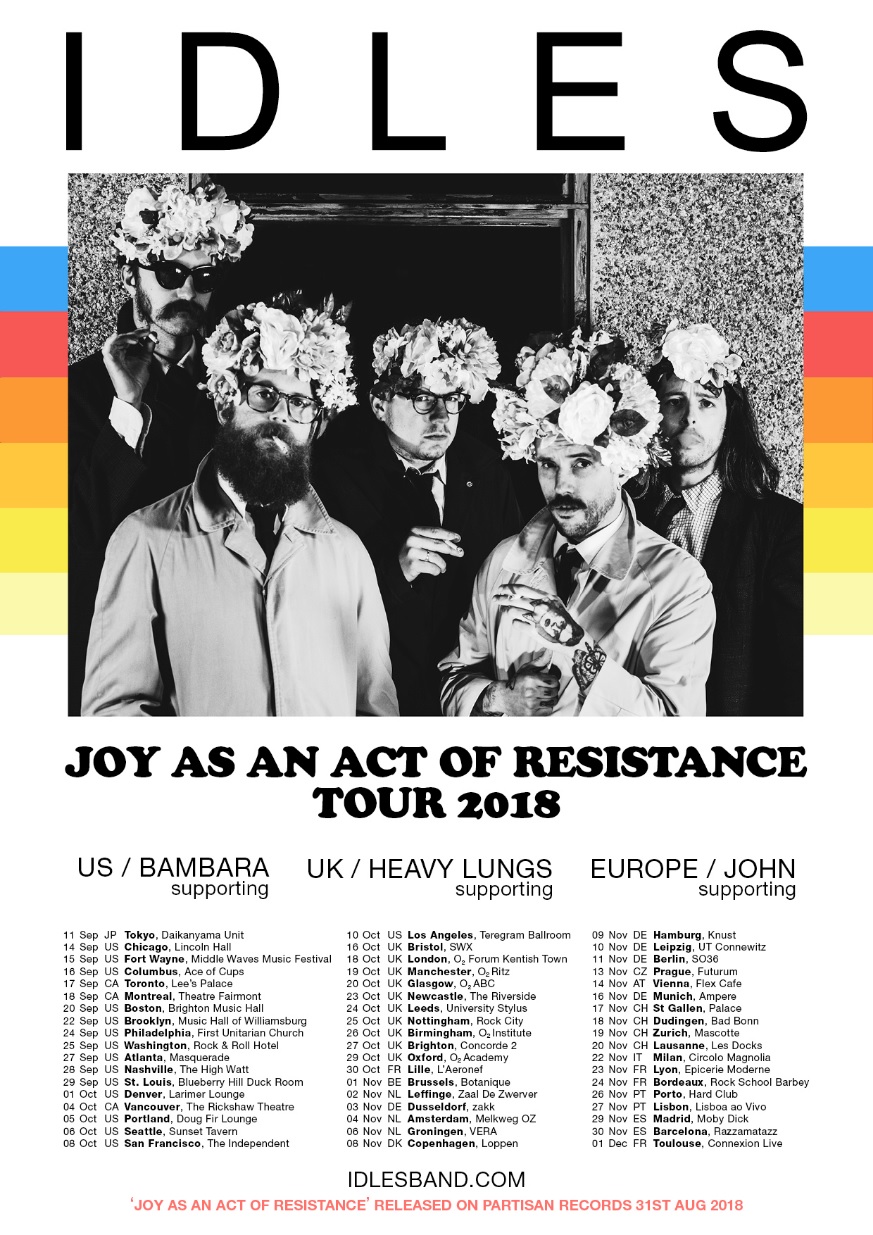