Say Sue Me are making a decent ‘Korea’ from their music 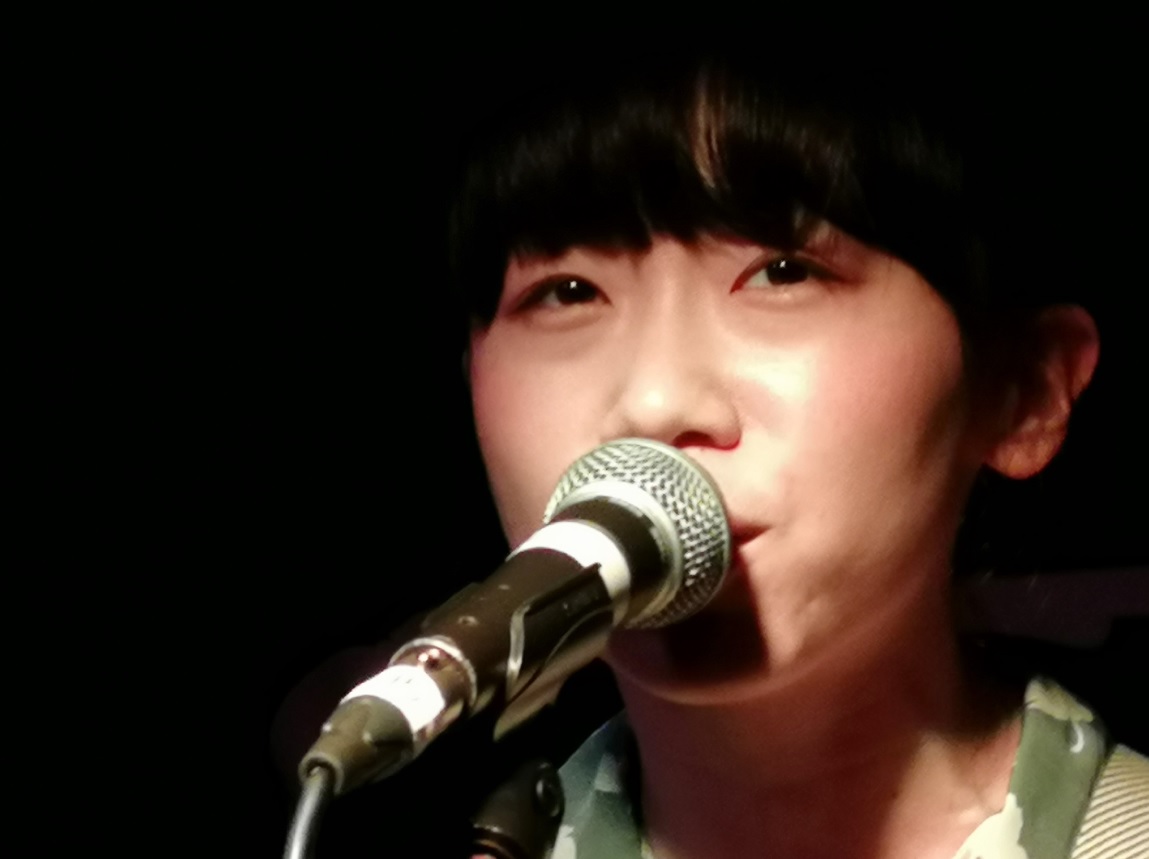 The Brighton & Hove News music team have been fortunate to have seen tonight’s headliners Say Sue Me before, when we watched them perform in May on the Love Thy Neighbour’s Great Escape stage. This is what we reported……….

“Thankfully South Korea has discovered surf-style fuzzy guitar indie pop and Busan’s Say Sue Me are well on the ball with it. Whilst watching friends Sumi Choi (vocals and guitar), Jae Young (Bass), Kim Byungkyu (guitar) and drummer Kang Semin during their set at the Hope & Ruin, I strangely recalled the swinging music band in an episode Gerry Anderson’s ‘Thunderbirds’. It was the way that Say Sue Me were rocking to their 1960’s surf tunes that did it. However, they are not afraid of embracing new technology as they had their phones on the floor with their setlist displayed on them. The crowd were equally pleased with their self-penned compositions, especially ‘Old Town’ as well as their covers of The Ramones ‘Rockaway Beach’ and Blondie’s ‘Dreaming’. I would sit them musically right in the middle of The Primitives and The Darling Buds vs Amber Arcades, Fazerdaze and Brighton band The Chefs. I really enjoyed their whole set and prey that they return very soon! I also regret not buying one of their CD’s at the show”. Update….I have since purchased their ‘Where We Were Together’ album and it is very good. Listen to it HERE. 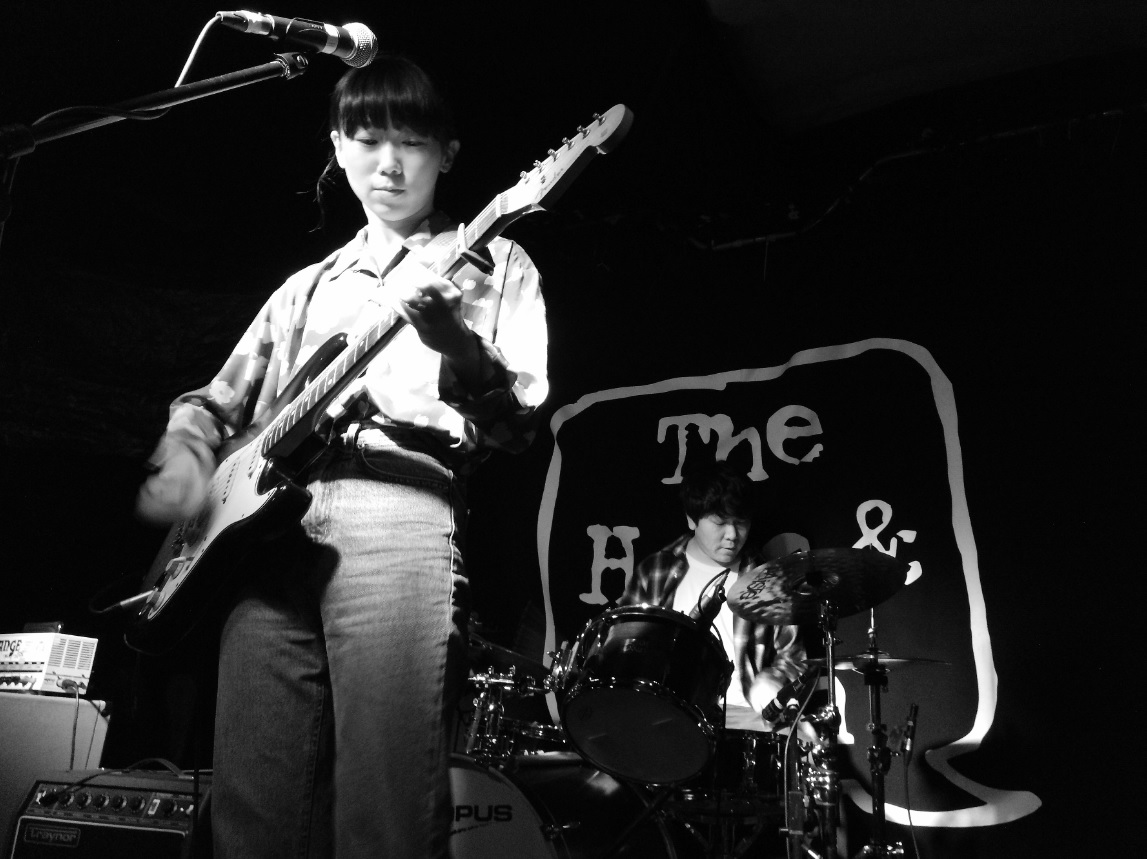 Here we are six months on from their Hope & Ruin appearance and we are back at the same venue, but this time everyone’s located upstairs. Quite a bit has happened to Say Sue Me since us seeing them, as two of their tracks were playlisted on BBC Radio 6 Music where Lauren Laverne, Tom Ravenscroft (John Peel’s son) and Gideon Coe have been championing the band. Although not everything has been a bed of roses, as singer Sumi informed me that a week prior to tonight’s Brighton gig, the band were in Milan, Italy playing a concert and their van got a puncture. Everyone piled out of the vehicle and whilst it was being fixed, they were distracted by this guy and unbeknown to them, that guys mate was secretly stealing all of the bands money! Thankfully they didn’t take the merch and so I dutifully purchased Say Sue Me’s debut self-titled 18 track album for £10 to compliment the ‘Where We Were Together’ that I already have. 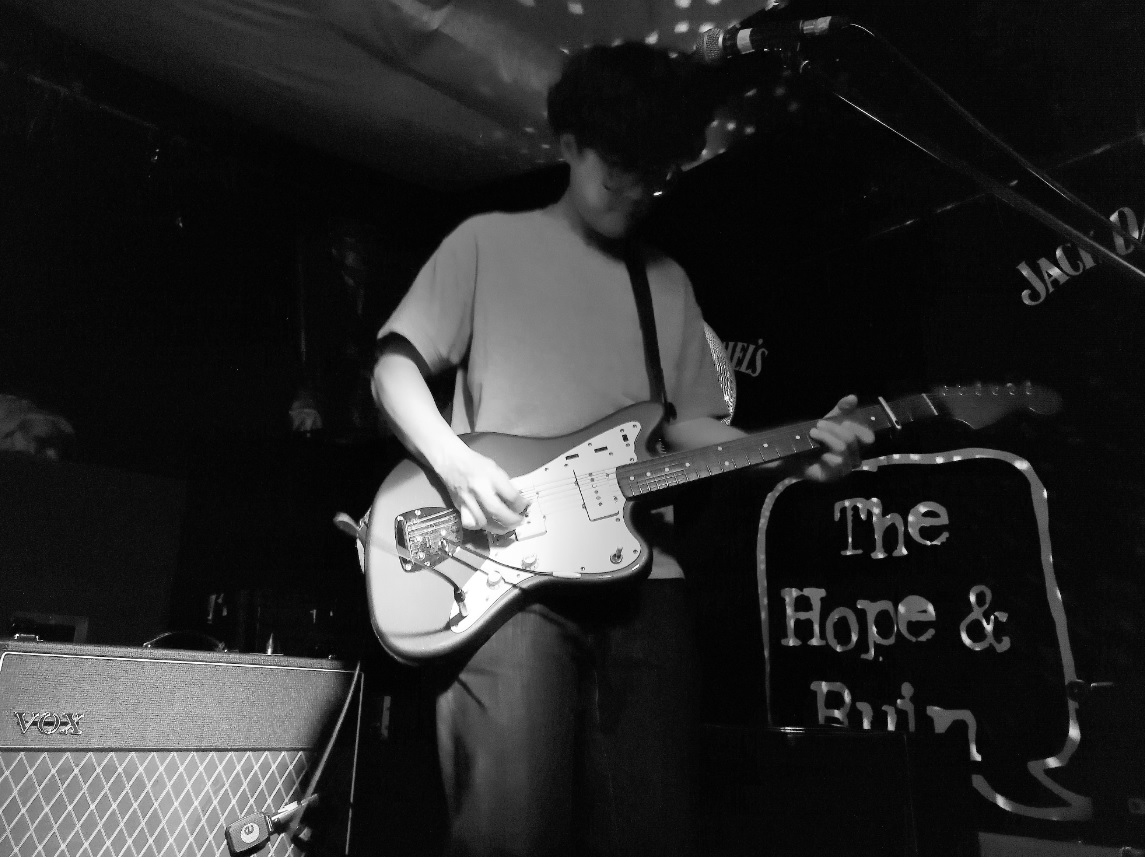 Despite being the ‘Where We Were Together’ tour, tonight the band only performed four songs (‘But I Like You’, ‘Old Town’, ‘I Just Wanna Dance’ and ‘B Lover’) from this dozen track album. They drew two cutz from my new debut platter, those being ‘One Week’ and ‘Bad Habit’ and culled the two cover versions ‘Rockaway Beach’ and ‘Dreaming’ from their April 2018 ‘it’s just a short walk!’ EP, which also has the aforementioned ‘I Just Wanna Dance’ on it as well.

The set was interspersed with three other numbers and the guys finished their twelve song set with their current single ‘Just Joking Around’. 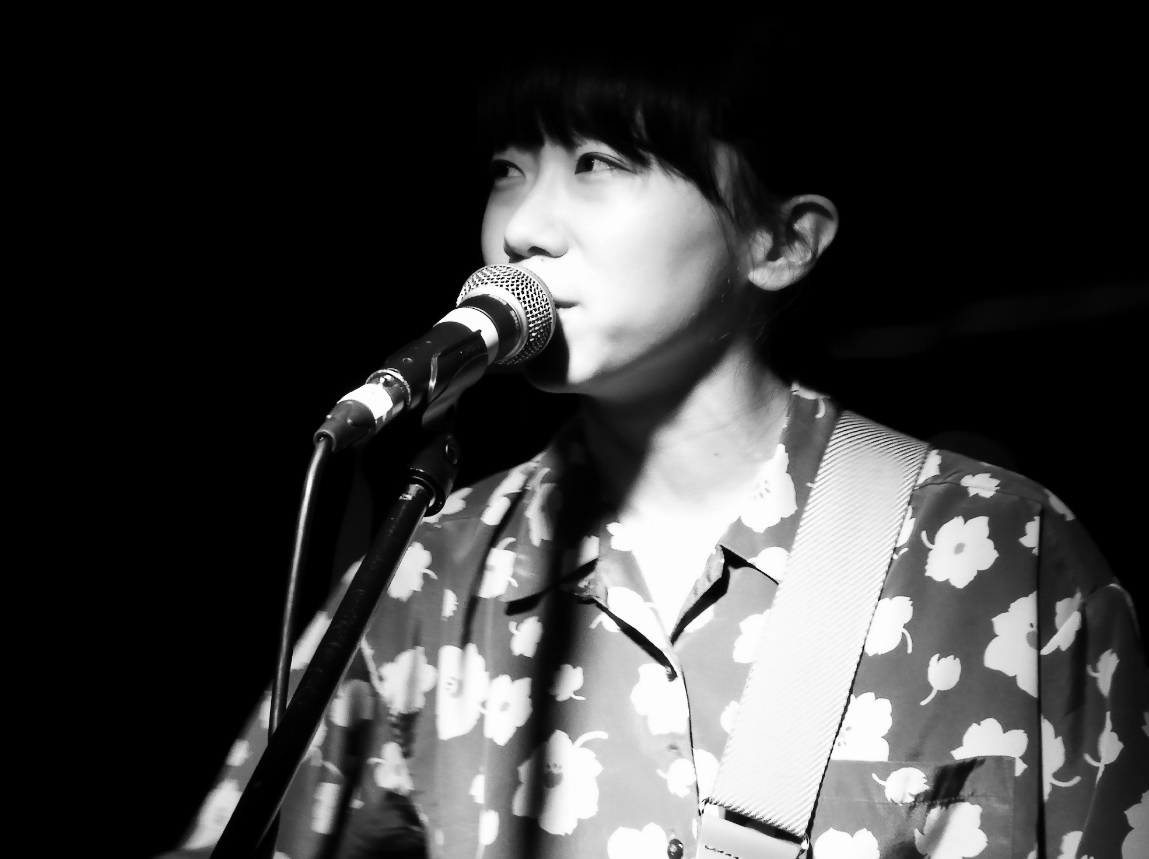 First up this evening was Cuboza, who is actually Jack Wolter from the Brighton based quartet Penelope Isles. Tonight, Jack was having a break from his Penelope Isles pals, who are sister Lily Wolter, Becky Redford and Jack Sowton. 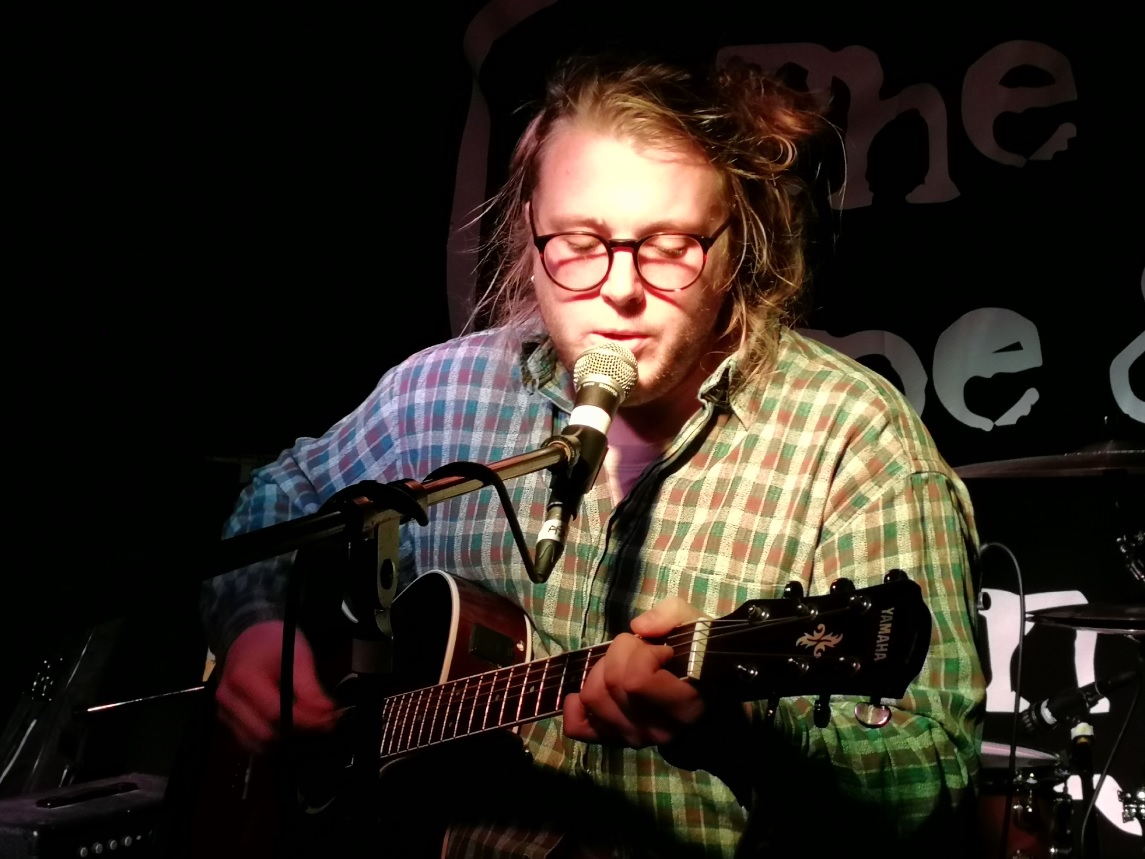 The Penelope Isles are on an upward trajectory and in 2019 are set to release their debut full album ‘Until The Tide Creeps In’, which will be coming out on former Cocteau Twin Simon Raymonde’s Bella Union Records. They were also one of the first 50 acts announced to play at The Great Escape in Brighton next May.

I have seen Penelope Isles live several times before and now I was intrigued to see what Jack’s Cuboza is all about. Cuboza, an unusual word, so I looked it up, it’s a square shaped box jellyfish found in tropical and subtropical waters. Clearly Jack wouldn’t have seen any of these where he originally hails from – the Isle Of Man.

In fact during Jack’s powerful solo performance, he informed us that his second tune of the night was written about his home and was entitled ‘The Island’. On stage it was simply Jack and his guitar, so it doesn’t sound that enthralling does it? Wrong! He showed us exactly what he was made of as he expertly strummed away on his guitar and unleashed his amazing vocals. In fact my colleague, said to me that it was the most powerful acoustic guitar set that he had ever heard. 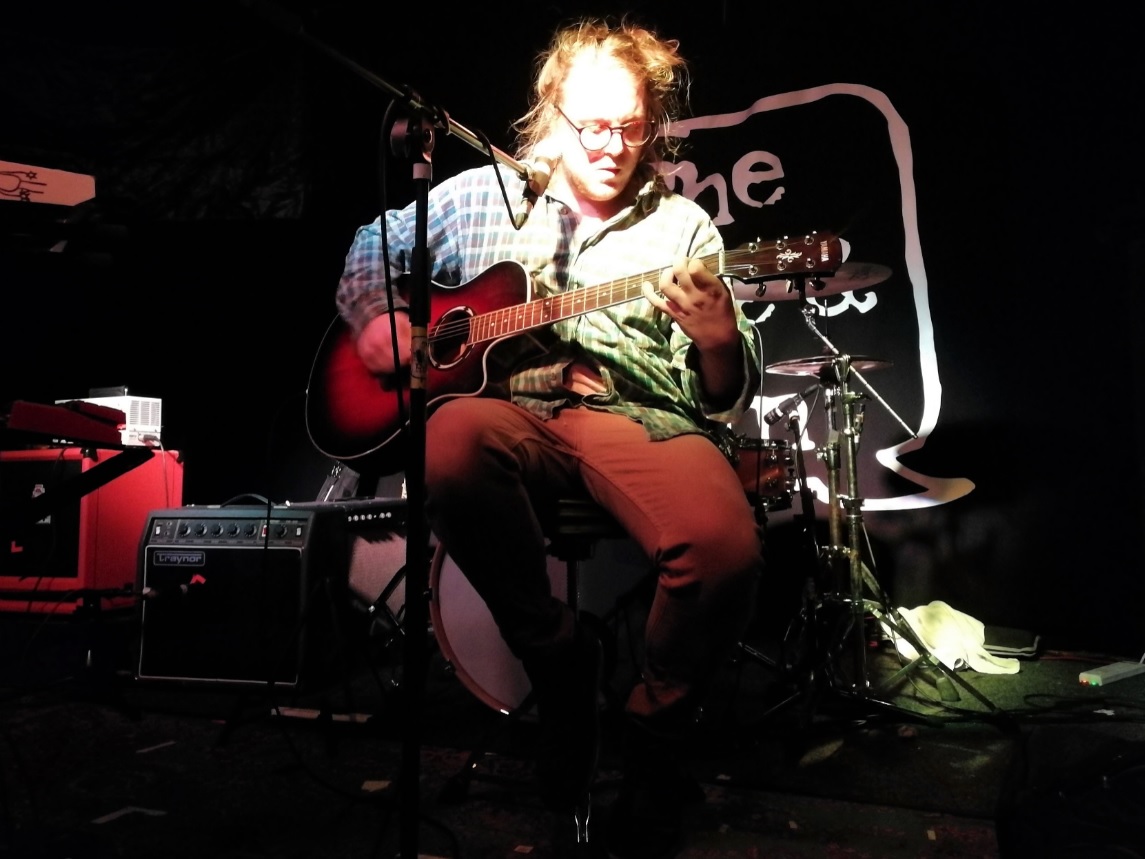 I could see how Jack was part of Penelope Isles as you could hear nods to their sound and he performed ‘Cold Coloured Gold’, which is a song by the band. At times, his voice reminded me of wonderful tones of John Lennon and my colleague said that Jack’s mastery of the acoustic guitar would put Ed Sheeran to shame. No stress there then Jack!

Whilst tuning up for one of the songs, he asked the audience if anyone knew any jokes? This chap blurts out that “This bloke came up to him in the street and said that he was going to attack him with the arm of his guitar”. “Is that a fret!” he replied! (boom boom).

Find out more about Jack’s band the Penelope Isles HERE.

Next up were Winter Gardens, who are a new Brighton area based 4-piece act made up of Ananda, Jim, Matt and Alex and the guys were this evening performing only their third ever gig. 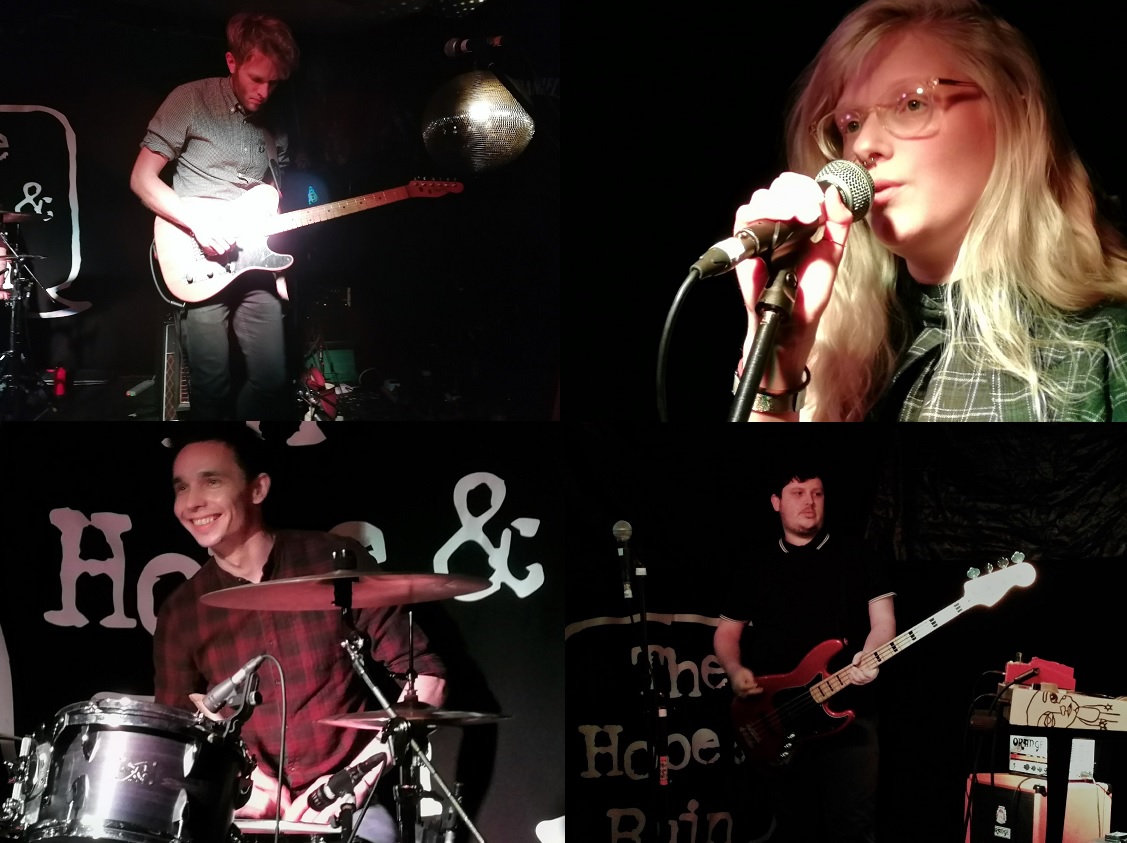 I must confess that I hadn’t previously heard of the band prior to tonight and whilst my colleague and myself were watching them organising their equipment on stage, my colleague pointed to Jim’s guitar. There were three letter on it and instantly we both knew that we were going to like this band. Turns out that we really, really, really like this band after hearing their six song set. Oh and those three letters were KLF.

Right then, equipment all plugged in and ready to go? Yes! Mobile phone set to record your set Jim? Yes! Right then, we’re off…….. 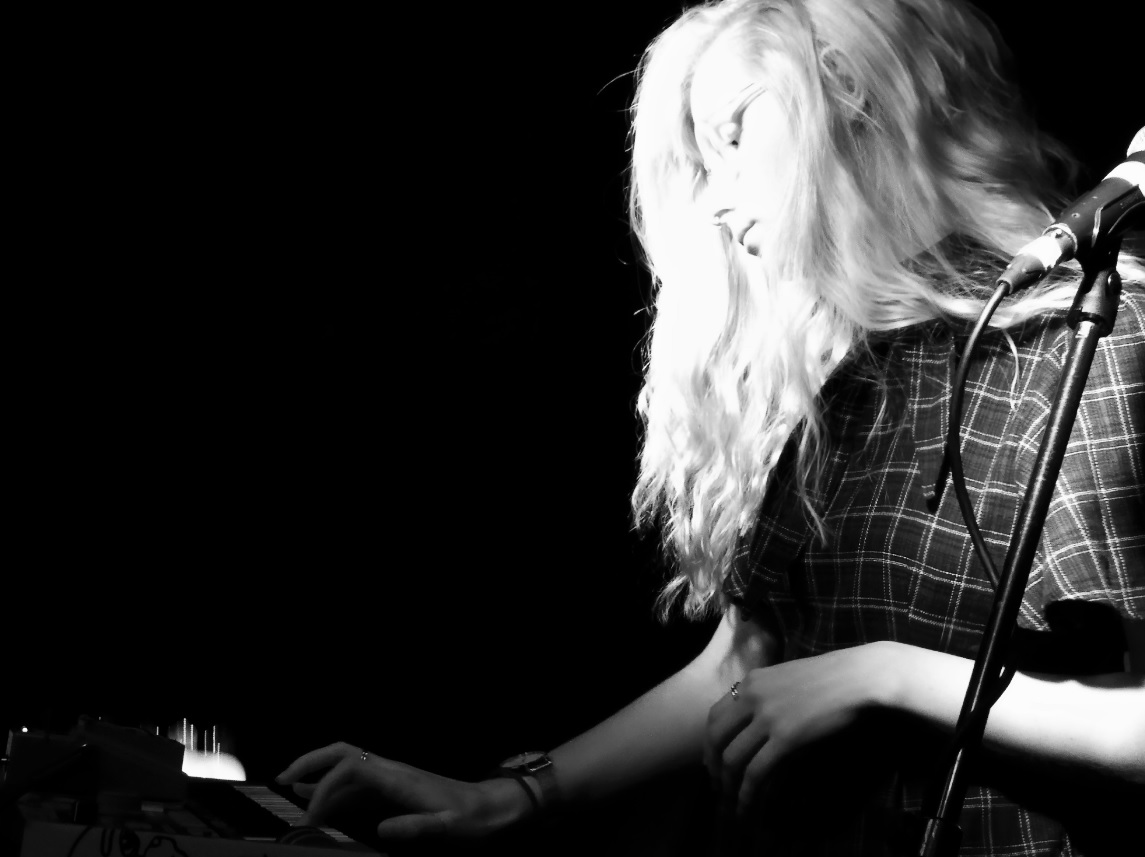 From the off Jim was making more wild axeman guitar poses than either Jimmy Cauty (of The KLF whom I have luckily met!) and Peter Hook does with his bass – this was going to be fun!

There was rocky enthusiasm from the guys, especially during a track that sounded like Stereolab’s ‘French Disko’, although their young singer Ananda – who incidentally reminds me of the 22 year old Norwegian singer Aurora Aksnes – has a more calming manner. Her vocals needed to be higher in the mix, as I couldn’t really hear her too well at times and indeed this was also the case for the following band, so it’s not a criticism of Winter Gardens in any way, just the sound engineer. 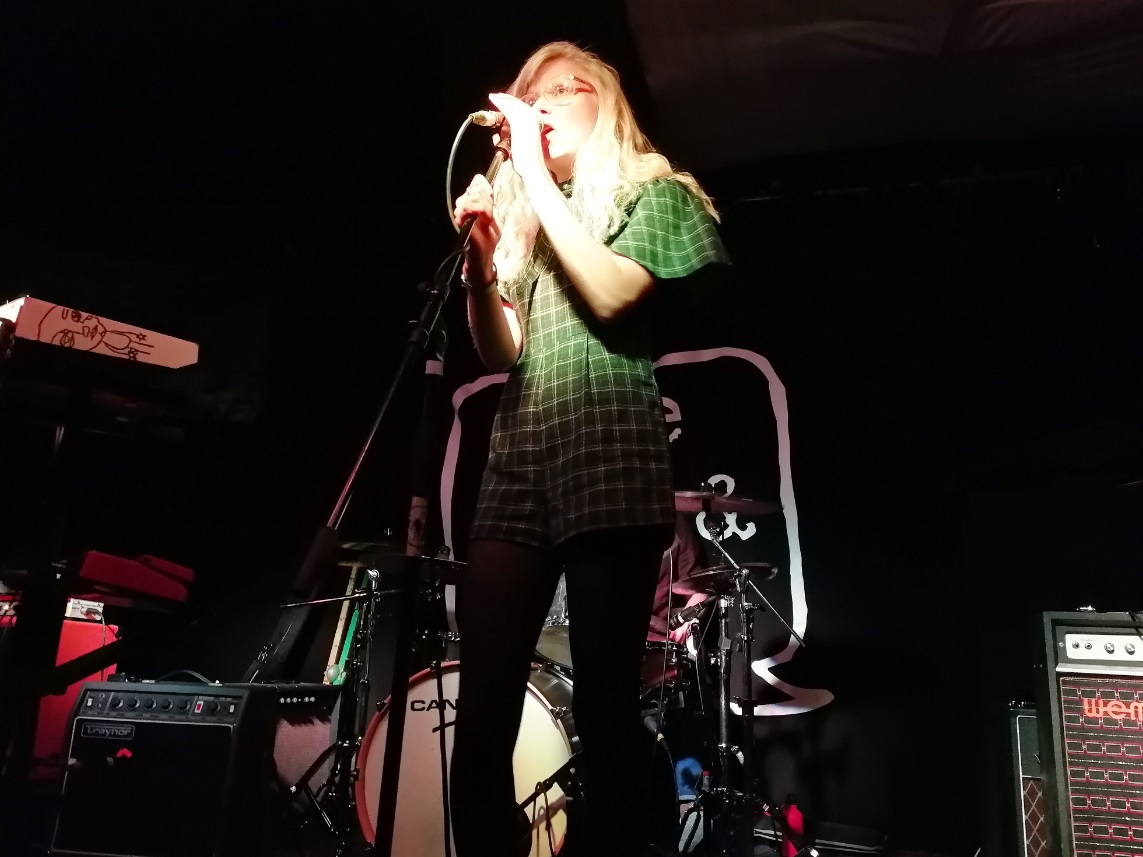 Ananda was also on keyboards too, and I for one would like to hear more synths in their dream-pop/shoegaze work as they progress. Hats off to the band as they successfully carried out a cover of the Cocteau Twins classic ‘Pearly-Dewdrops’ Drops’. I was mesmerised by Ananda during this version as she totally got herself immersed in the composition.

It amazes me that the promoter of tonight’s event, Andy from Love Thy Neighbour, keeps on finding these terrific new local acts. I would seriously urge him to put Winter Gardens on the bill again very soon! I’d go and see them! I tell you, this young indie band will go far. Already, they are set to play the ‘Rockaway Beach’ indoor music festival in January, which is being held in West Sussex, with the likes of Gary Numan, Echo & The Bunnymen and Maxïmo Park on the bill. 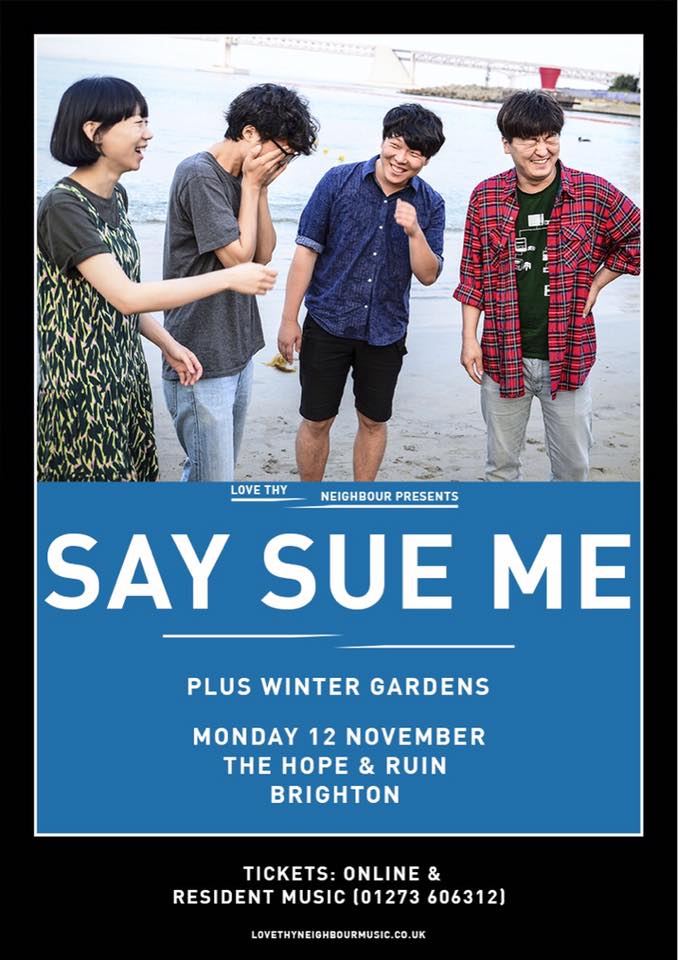 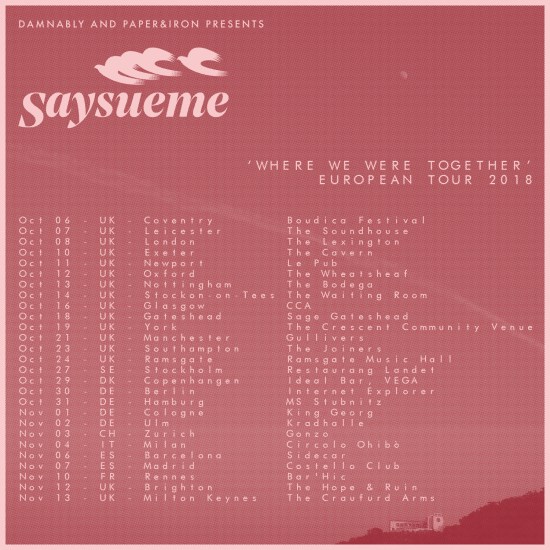 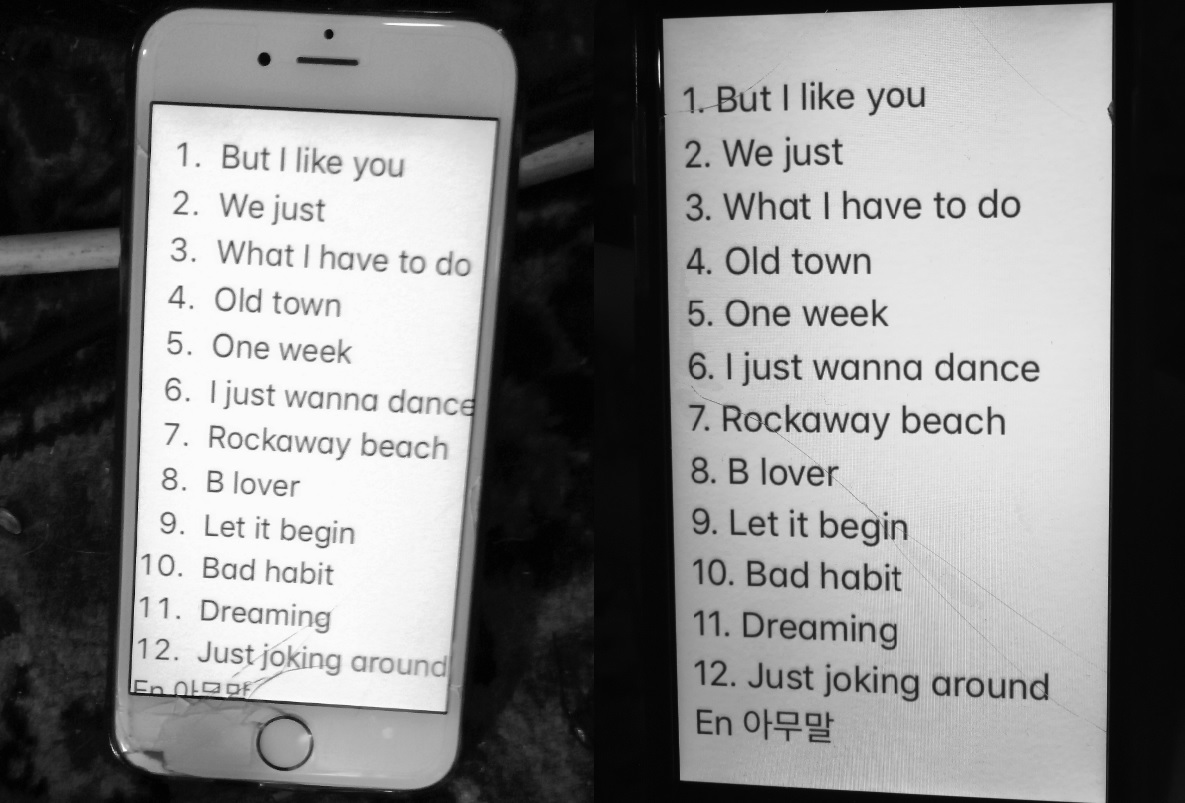 Tonight’s Say Sue Me setlist as shown on the phones of two band members. 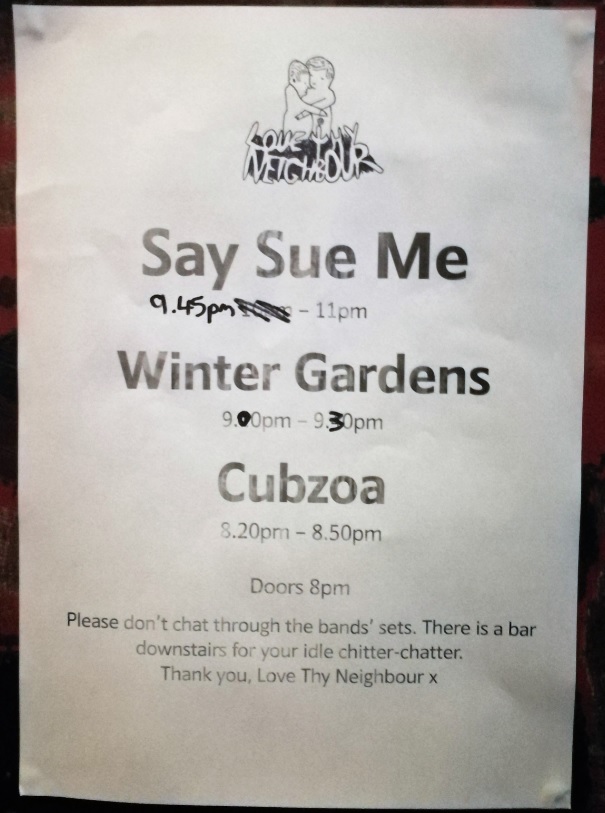