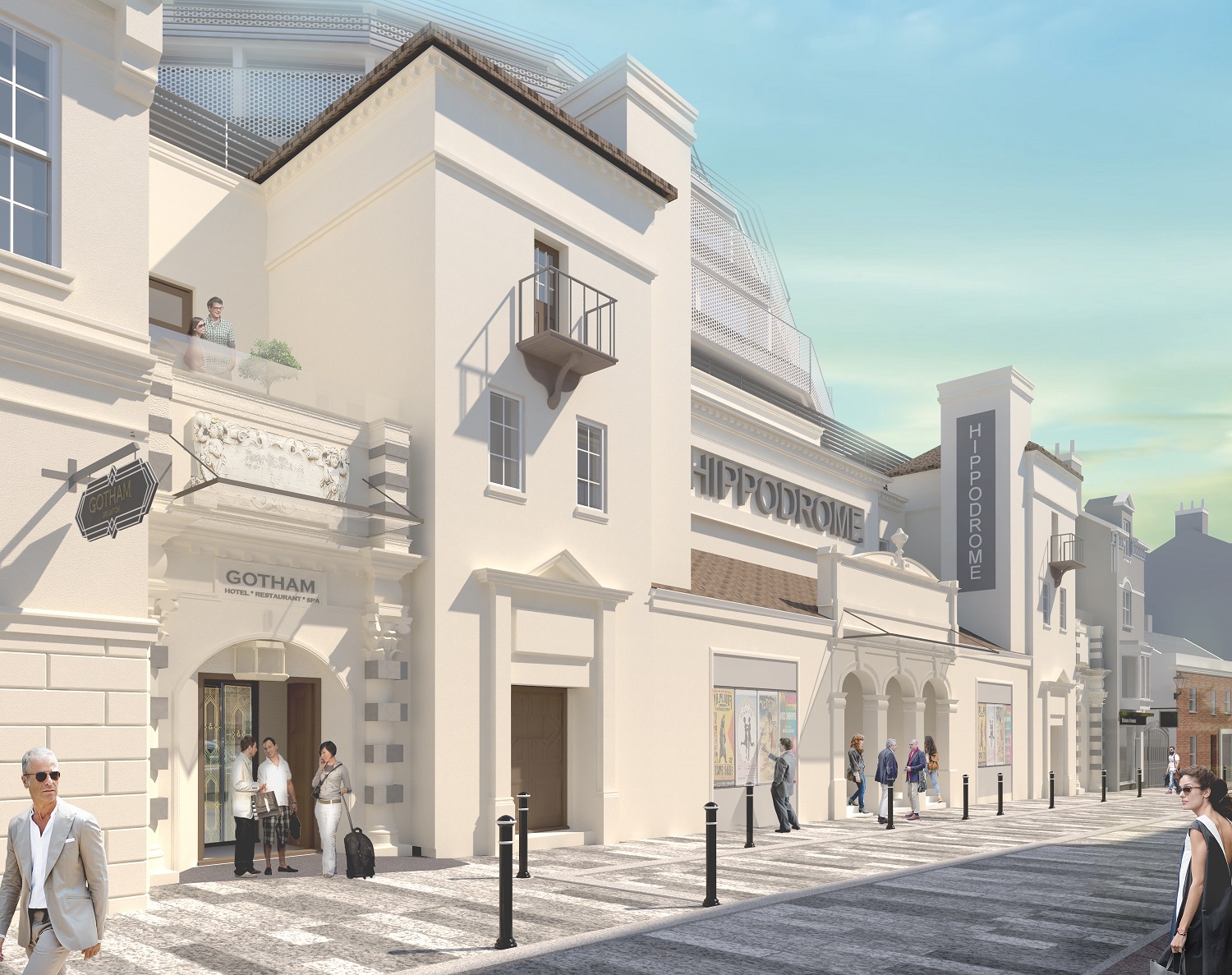 The new owners of the Brighton Hippodrome have released the first image of their proposed plans for the at-risk theatre.

HIPP Investments bought the Hippodrome in November 2017 after plans to convert it into a cinema fell through – and despite attempts by a campaign group to buy it and restore it.

HIPP Investments says it also wants to restore the theatre – but also build a 74-room hotel with spa as well as 26 apartments on the site.

Theatre campaigners fear that the plans may involve demolishing the theatre’s fly-tower, which holds the scenery needed for major touring productions, as well as building on the part of the site which gives access for large lorries to unload sets.

Both these elements of the theatre are now protected under the planning process after the city’s Old Town Conservation Area Management Plan was approved with a clause protecting the fly tower and yard.

Full details of HIPP’s plans are not yet available and no application has been made to Brighton and Hove City Council’s planning department.

However HIPP says two public consultation events will be held in mid-February, where full details of the plans will be revealed, with dates and details to be released shortly.

The Hippodrome in July last year. Image from Google Streetview

Aized Sheikh, CEO of HIPP Investments, said: “The Hippodrome is an iconic building with an incredible past and, if left unchecked, will be lost to future generations who will never be able to appreciate its history and splendour.

“We hope to create a theatre that will become a cultural mainstay for the city for decades to come, in an area that is in dire need of regeneration.

“A strategic plan for the refurbishment of theatre is being drawn up including timescales for a phased development programme. Ultimately, our vision is for the Hippodrome to be run as a non-profit entity by professionals who understand where it will sit amongst Brighton’s theatres.”

A spokeswoman for the Theatres Trust, which this week announced the Hippodrome topped its at risk register for the seventh year running, said: “Brighton Hippodrome has been on our Theatres at Risk Register since it began and continues to top this list, as announced on Tuesday, scoring the maximum points for its significance and community value.

“Not only is it the UK’s most architecturally significant circus theatre – the finest surviving example of its type in the country – but a viability study has shown it could have a future as large-scale theatre, which Brighton currently lacks.

“It is critical that any development of the site includes a fully funded restoration of the theatre which will preserve its capacity to function as a large scale venue for performance.

“Brighton cannot currently present large scale dance, theatre and other performance and a fully restored Hippodrome operating on a commercial basis would be an important and exciting addition to Brighton’s vibrant cultural scene as well as generating significant regeneration of the area and economic benefit to the city.

“We will be interested to see the full plans when they are released and will be responding to the planning application in our role as statutory consultee.”

The plans for the theatre, which has lain empty since 2007 and has topped the Theatre Trust’s at-risk register for several years, are being drawn up by LCE Architects and engineers ARUP has been appointed to conduct a viability study of the theatre and its future potential.