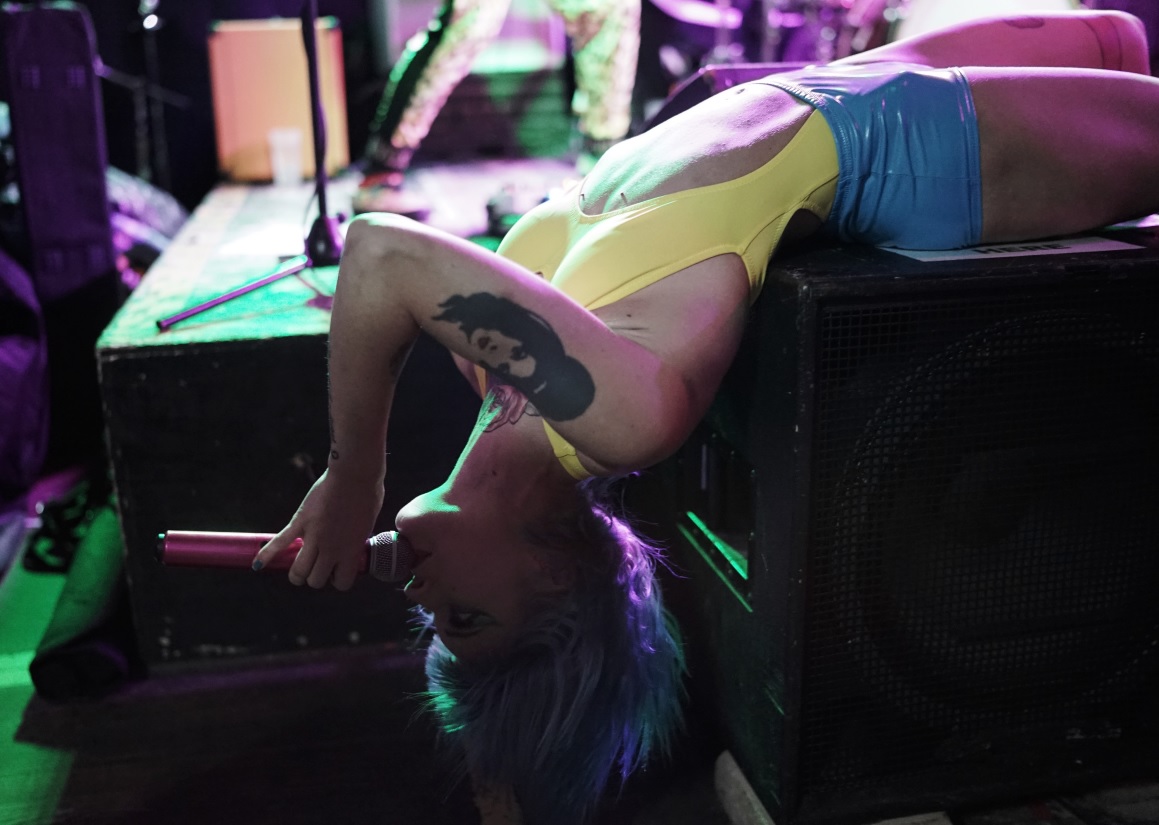 The Beating Hearts Agency must have certainly been dead chuffed with themselves tonight at The Hope & Ruin in Brighton, having pulled off no less than a handful of half hour music performances by up-and-coming acts and still finishing dead on the stroke of 11pm. 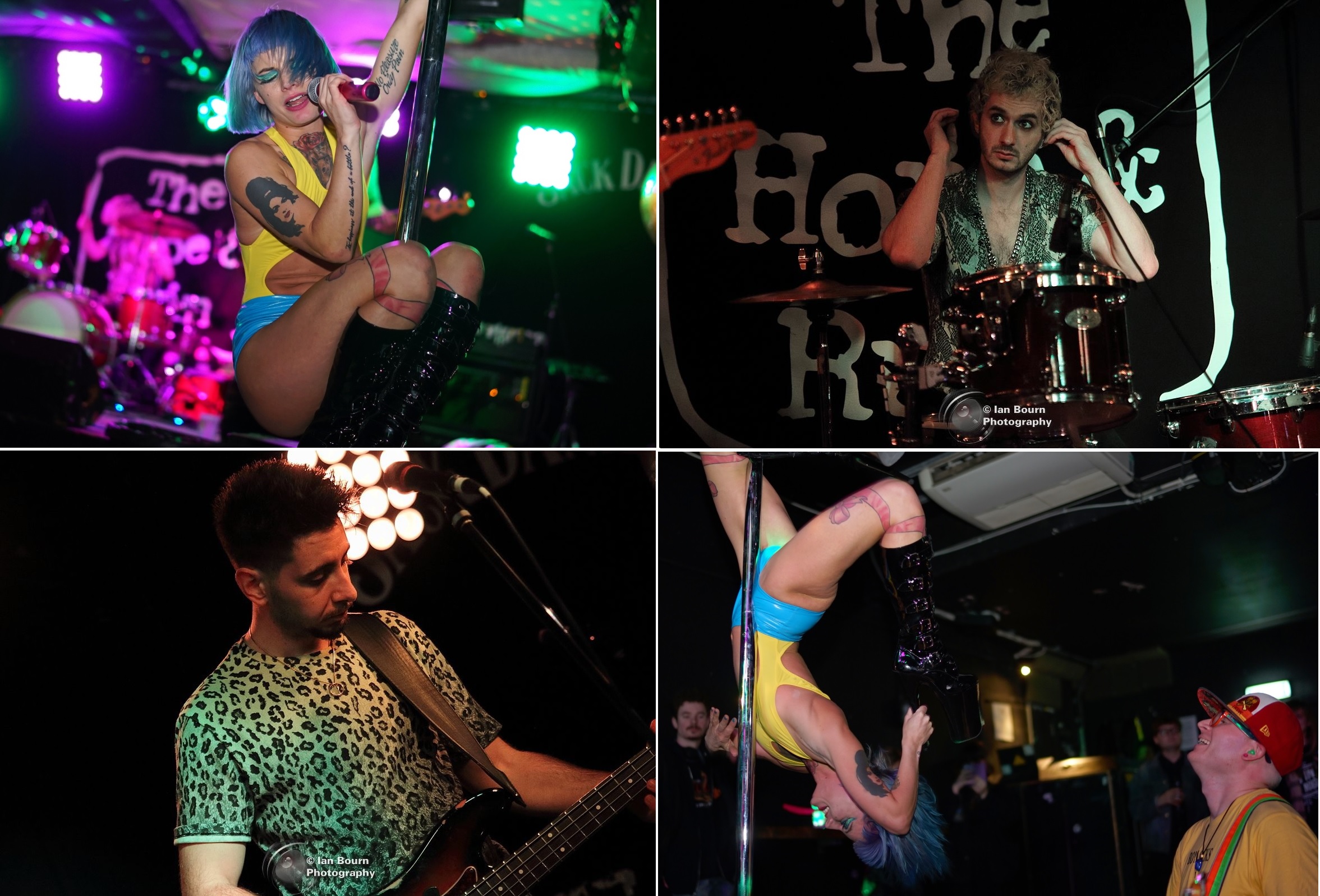 Just over two months ago the Brighton & Hove News Music Team reported on the exploits of pole dancing Dolly Daggerz and her Tokyo Taboo and tonight they were back in action. (Read our review previous review HERE).

The band were appearing in Brighton as part of a 6-date UK tour in support of their new material, which they have recorded in California and includes their new single, ‘Whiskey’, which is taken from their much- anticipated upcoming new album.

The act is composed of a feisty and ferocious pair of Londoners, namely Mickey Danger and the aforementioned Dolly Daggerz. Their debut album, ‘6th Street Psychosis’, brought them acclaim from the likes of Radio X’s John Kennedy, BBC Radio 1, Clash and Punktastic. These riotous rockers have built quite a reputation for their spectacular, character driven, and often shocking vibrant live performances. Tonight is no exception.

As a live unit, the duo expand to a quartet and two of the lads (Mickey and Jules/Jools) take to the stage wearing hazmat headgear for the first track. All eyes, however, are drawn to Dolly as she (carefully) steps off the stage in her 6” high heel boots and begins to make use of her ‘X-Pole’, which is situated in amongst the crowd. A large number of which are poised with their cameras and phones in order to grab shots of the action!

Dolly did not confine herself to her pole or up at the front with the lads, but at one stage somehow managed to get atop the bar whilst still singing. The microphone was put through its paces as it was from time to time thrown onto the stage, whilst Dolly continued her aerodynamic pole dancing routines.

Momentarily Jools/Jules bass gave up the ghost, but was soon back in action, pumping out loud rock chords. The band were reasonably fast and too much into the rock spectrum for me personally, but both of my Brighton & Hove News photographer friends were very impressed indeed, and they dutifully snapped up a vinyl album each. Their only purchases on the night!

Find out more about them at www.tokyotabooband.com 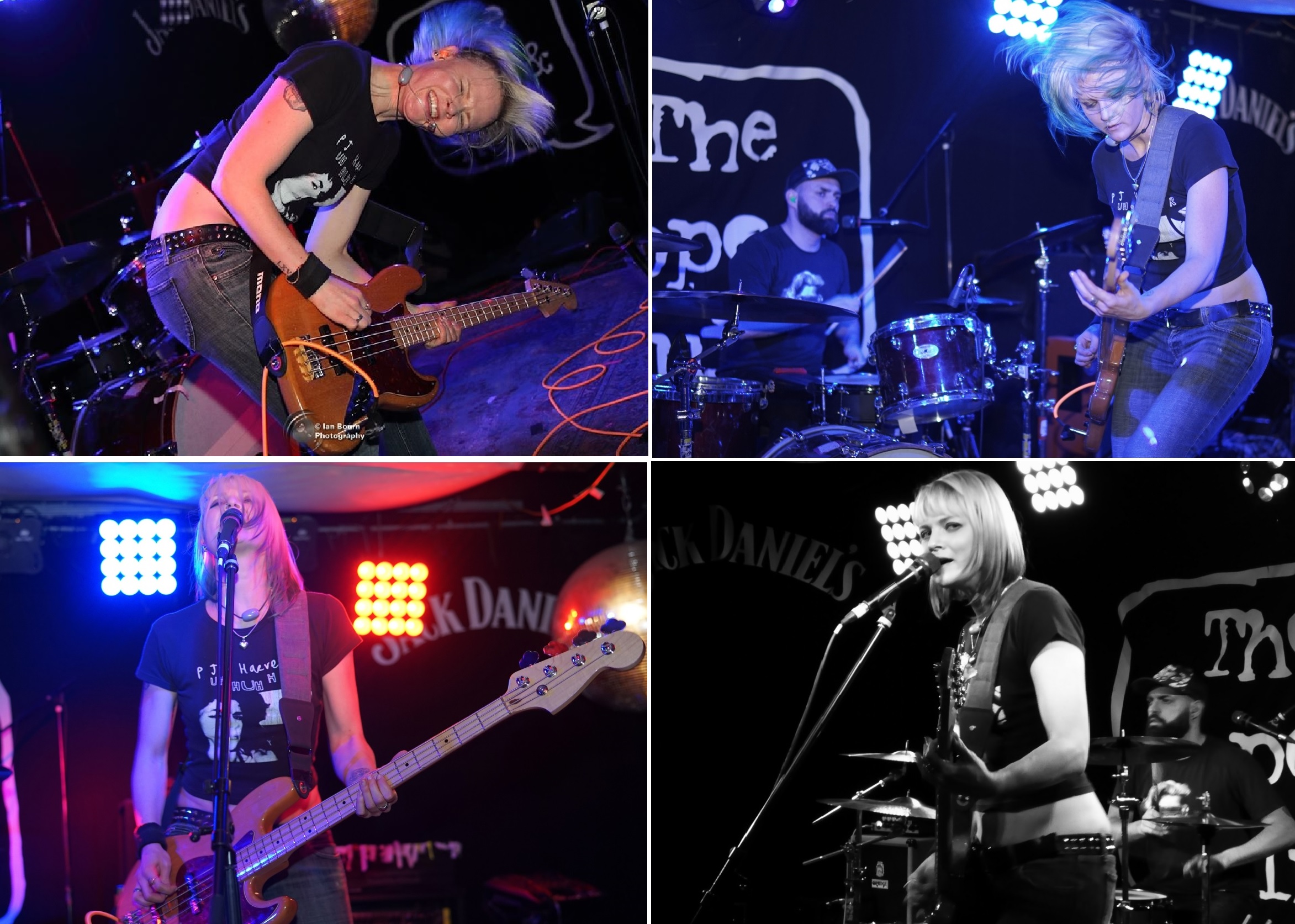 It was the turn of Yur Mum next. This rock duo are based in London, but actually surprisingly hail from Brazil of all places. I immediately picked up on vocalist and bassist Anelise Kunz slight accent, and wrongfully presumed that she was quite possibly from Eastern Europe. I was rather taken aback when speaking to her after their half hour set, about her heritage. I recommended a fellow Brazilian band called RAKTA who had played on the same Hope & Ruin stage a few months earlier. Anelise had not heard of them, but I will rectify that situation immediately – RAKTA review HERE.

The other half of Yur Mum is drummer Fabio Couto and they have been performing since 2016. Then in 2018 they released their debut album ‘Road Rage’, which was followed by extensive international tour dates of the USA, Brazil, France, Belgium, Austria, Hungary, Czechia and not surprisingly here in the UK. In 2019, they released ‘Ellipsis’, an EP which includes the single ‘Sweatshop’, which was featured by Tom Robinson on BBC 6 Music. They finished the last decade with over 200 performances around the world, supporting and meeting bands they love, whilst getting played on radios all over the globe.

Tonight Anelise and Fabio were most certainly on the case with their blend of bellowing shouty Noddy Holder (ask Yur Mum) style vocals and fringey indie/punk rock. They were heavy and clearly are masters of their instruments. They performed two songs that as yet are to be given names, but they were followed by a decent track called ‘Crazy’.

All five acts are clearly making great inroads at what they are choosing to do, but for me personally Yur Mum just about edged it as standout act of the night. I suspect my two photographer friends would not be in agreement with me. 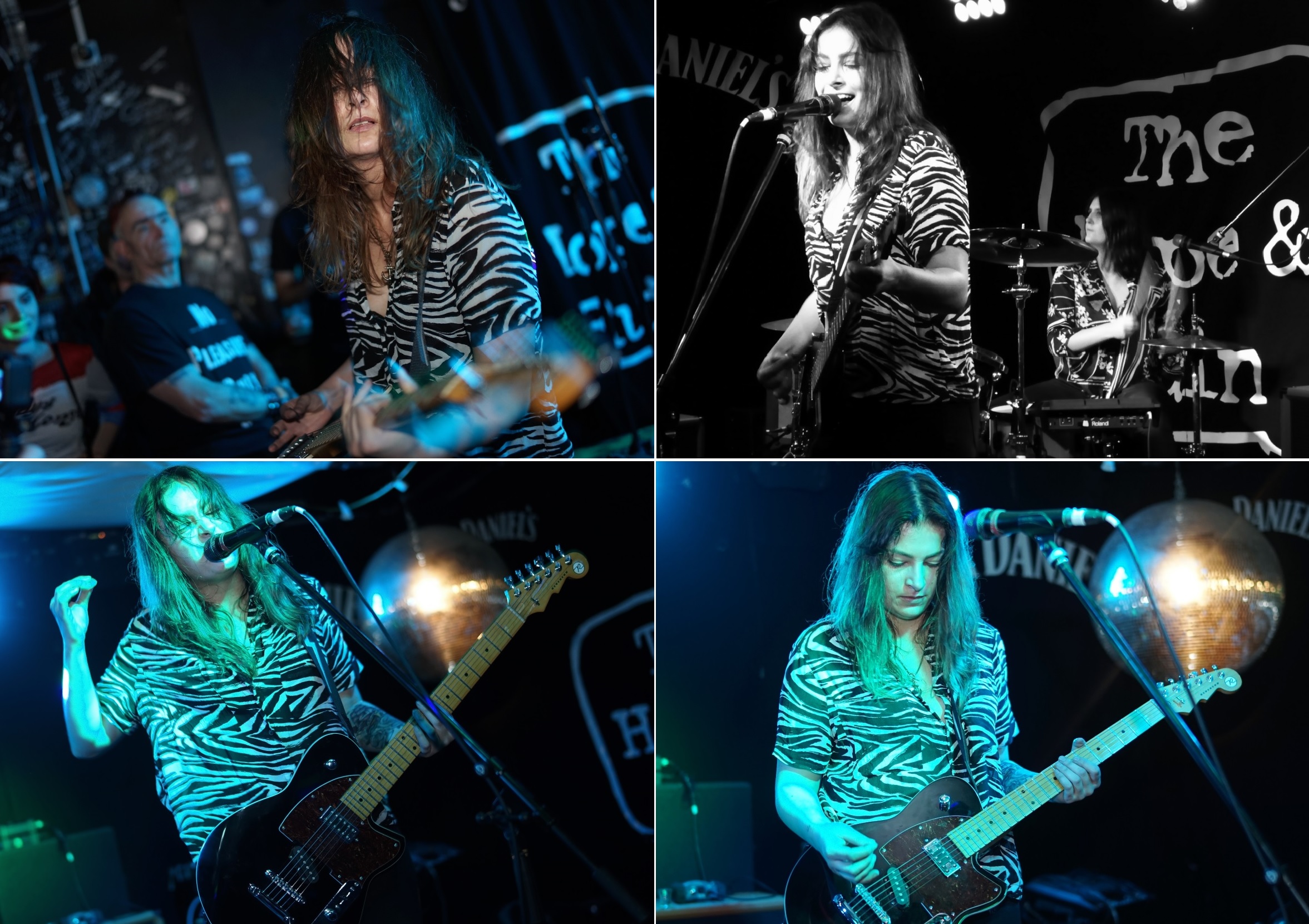 Time was whizzing by and so it was the turn of Run Into The Night who are a warm and friendly Glasgow based duo consisting of guitar/vocalist Christina Cassette and drummer Ellie May.

These girls proudly offer up bags of punk rock attitude with a Country Rock Spaghetti Western twist! They superbly fuse punk with blues, disco and funk! Thus you never really know what to expect from their next song! In fact tonight, I would even add that they at times had a 60’s vibe going down too. Ellie was also in charge of the Roland keypads and there was an organ sound emanating from somewhere amongst their kit.

They did not exactly stick to their proposed setlist as they performed the A-side from their recent 7” release, namely ‘The Devils Rhythm’ and then went onto perform ‘Bad Girl’. Prior to both of those, they gave an outing to ‘Mon Cheri’ which is available on limited 7” red vinyl and features Martin Metcalfe of Goodbye Mr Mackenzie and The Filthy Tongues. I reported on a performance by Martin with Skids frontman Richard Jobson at the Latest Music Bar back in 2018. Read the review HERE.

One of my photographer friends likened them to Honeyblood. Who am I to argue?

Further details can be located on their official website HERE. 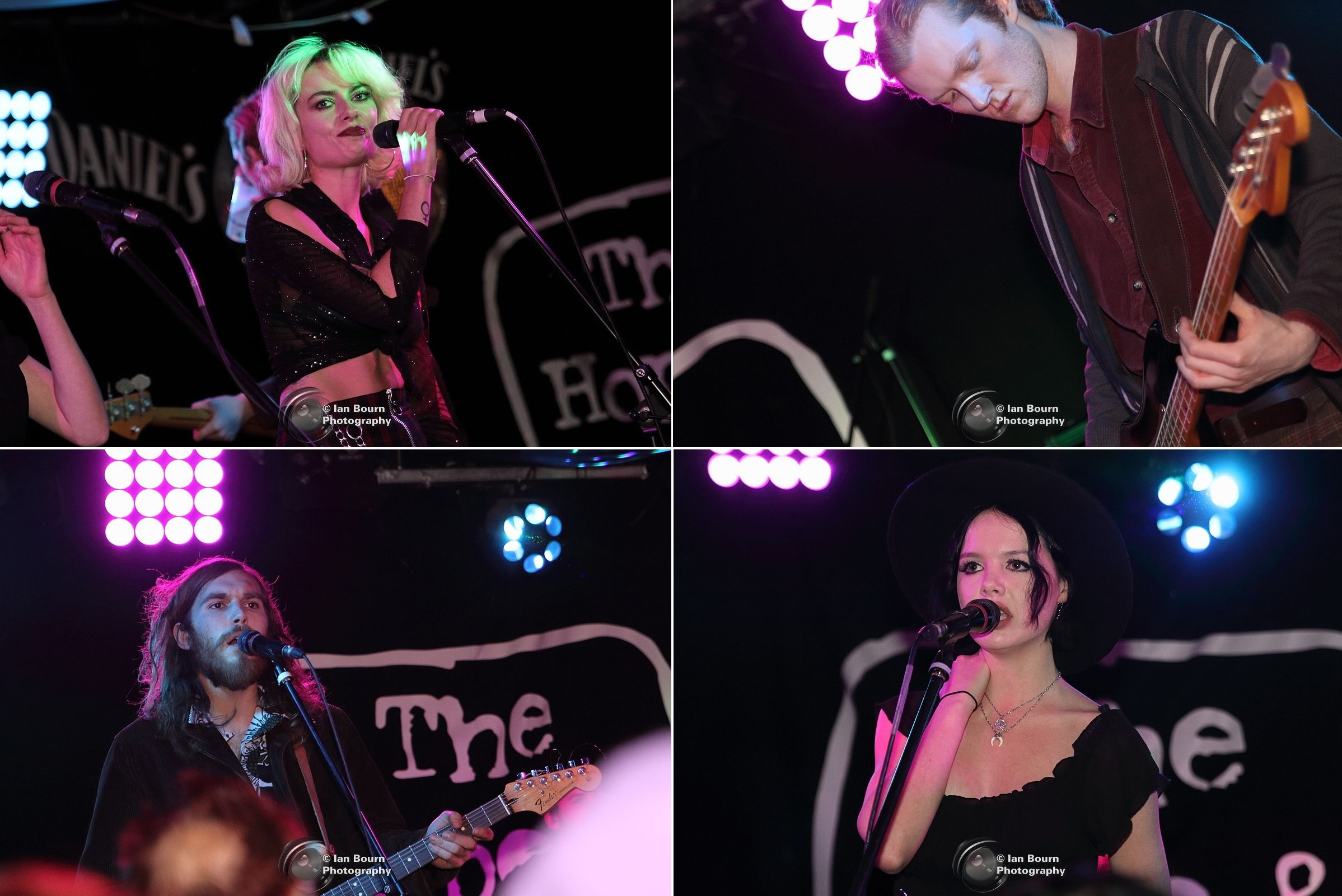 By now the venue had suddenly filled up with eager punters. It had become clear that a certain amount of them had in fact come along this evening with the sole intention of grabbing a 30 minute session with Brighton based Hourglvss.

Hourglvss comprises of dark-haired Wakefield lass Sophie-May Williams and her ‘bestest friend’ in the whole wide world, the north Wales born ‘bleached blond’ Katherine Benbow, who to me is a dead ringer for Brighton based musician Holly IVI.

When performing live, the vocalist duo expand into a five-piece with the assistance of three lads, who are on drums, bass and guitar/keyboard duty. Sophie-May dabbles on keys during this evening’s set.

The Brighton & Hove News Music Team have reviewed a previous performance from Hourglvss, when they headlined also at The Hope & Ruin, on 5th October last year.(Enjoy our article HERE).

Hourglvss are purveyors of technicoloured alt-pop tunes that purposefully live in the divide between fantasy and reality. They cite their varying musical influences as Cocteau Twins, The Velvet Underground, Charlotte Gainsbourg, Kate Bush and PJ Harvey. Thus their sound tonight is different from the other four acts, who are more in rock territory as opposed to pop.

Katherine and Sophie-May begin their set acapella and one immediately notices how in tune with each other they are. All throughout their set they would often face and stare at each other and unload the words in a sassy style and in perfect unison. The girls offer up truly soulful vocals, especially during ‘Watch Me Baby’ which was written about mental health. ‘Pretty Ones’ followed which could easily be lifted from a theatre production. Their final number was the best received tune, namely ‘Supreme Beings’, which starts (and continues) like a mashup of ‘Japanese Boy’ by Aneka meets Sylvester’s ‘You Make Me Feel (Mighty Real)’ and the disco output of ABBA.

On the night, the evidence is that Hourglvss are the band most likely to breakthrough. I’m sure folks in town will be catching them performing live relatively soon. 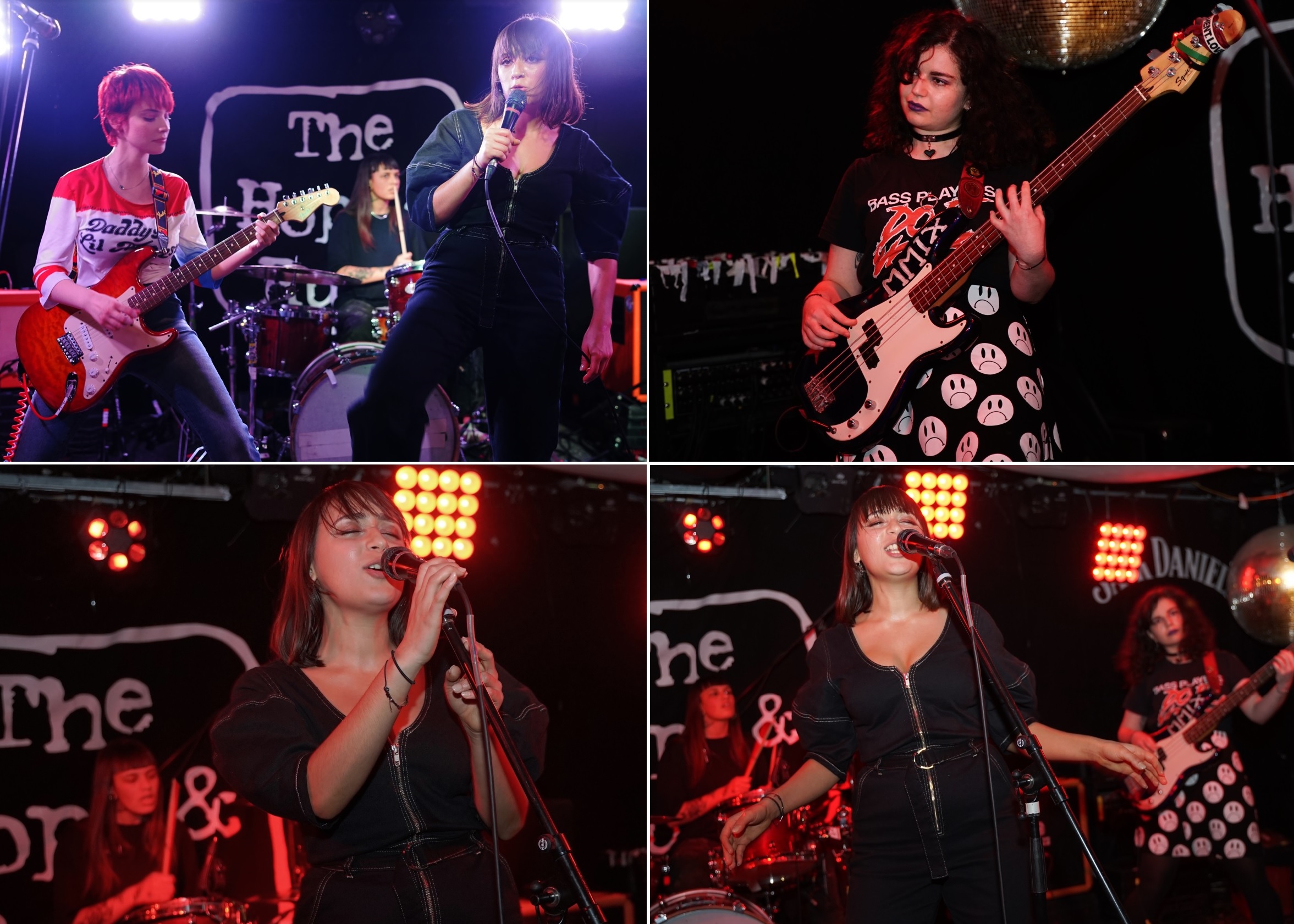 Last and by no means least this evening are Brighton based ĠENN (f.k.a. Cryptic Street//pronounced Jenn), who inform us that they are “a musical riot, ready to rock your ears and mess with your brain”. The band is a result of a trans-national pairing which came about through the internet and features Leona Farrugia (vocals), Janelle Borg (guitar), Leanne Zammit (bass) and Sofia Rosa Cooper (drums).

Tonight, they most certainly served up a post punk vibe right from the off with their instrumental opener ‘Island Blues’. The following number, ‘Like You’ seriously announced the arrival of Leona with her modern day take on powerful Tina Turner warbly style vocals. Here is a band that most certainly can play their instruments well.

Their rocky DIY sound is drumming led by Sofia and Leanne’s bass sounds often jump out at you and as a result they have been shaking audiences to the core with their infectious tunes, which have honest and relatable themes, an example of which is ‘Don’t Need No Men’.

Earlier on in the week, ĠENN uploaded their latest video for ‘Duda Dance’ which is their first work since their 2018 debut album ‘Titty Monster’. Check out the album on Bandcamp.

And so the trans-national ĠENN quartet concluded their set bang on 11pm – The exact time the UK left the European Union. Now there’s a coincidence! 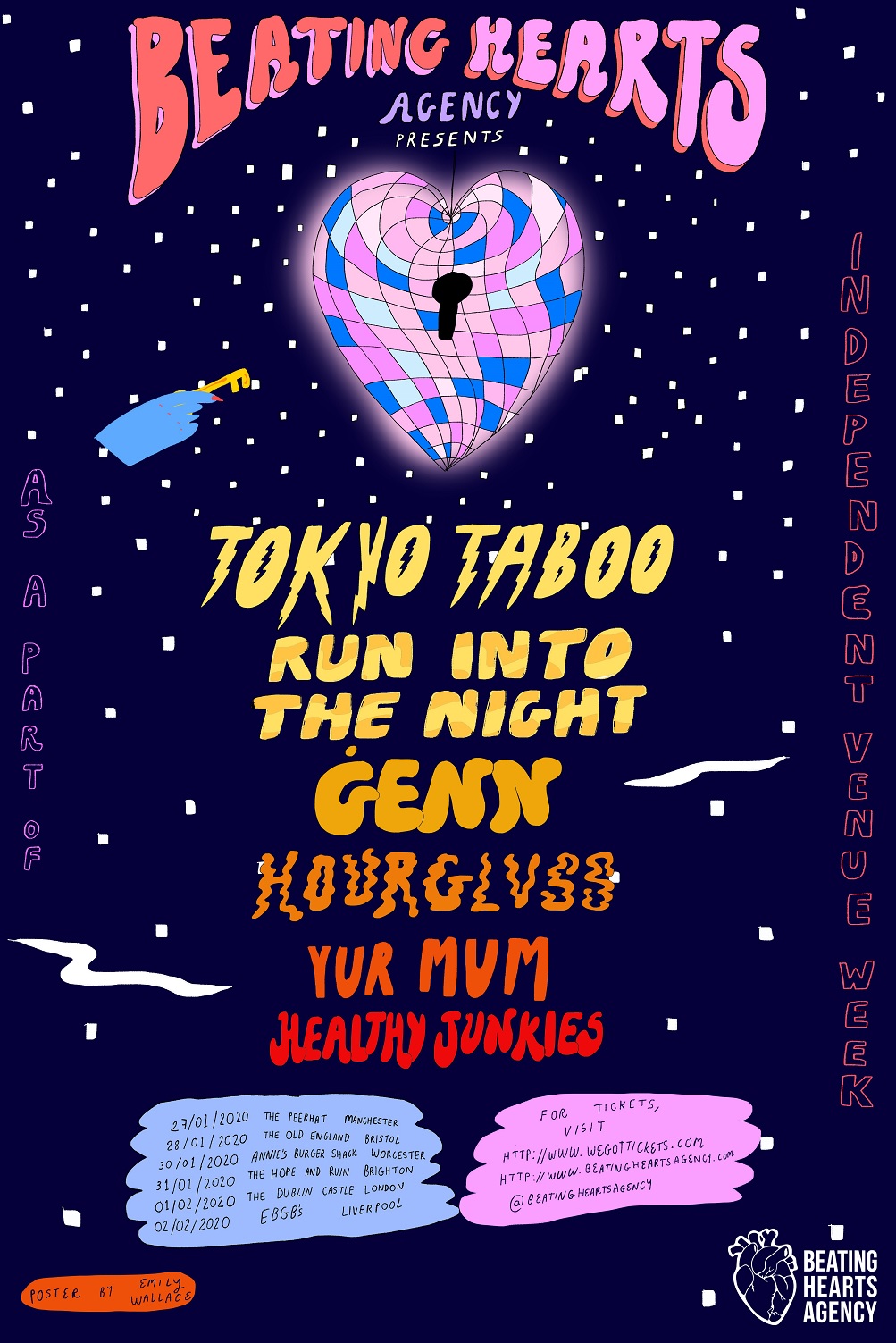 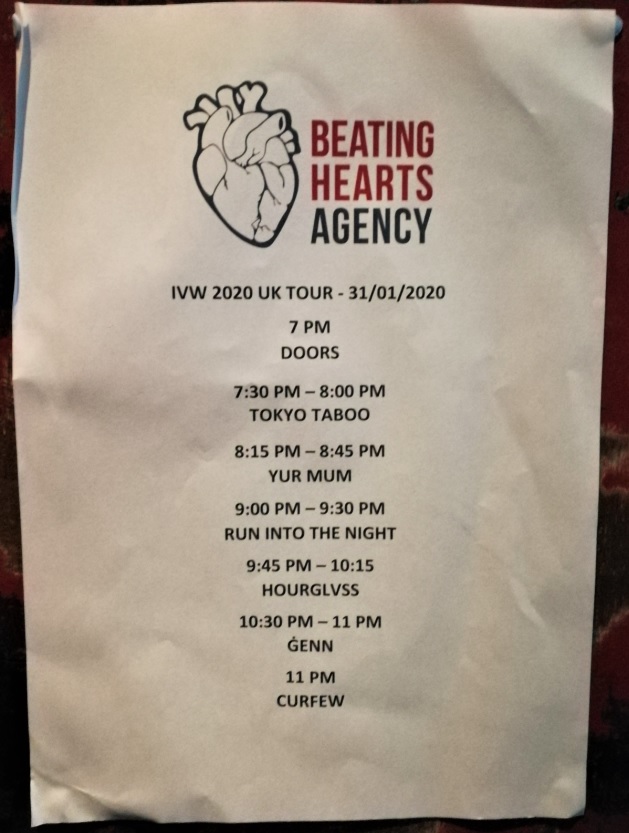