The Hu bring their warrior rock to Brighton 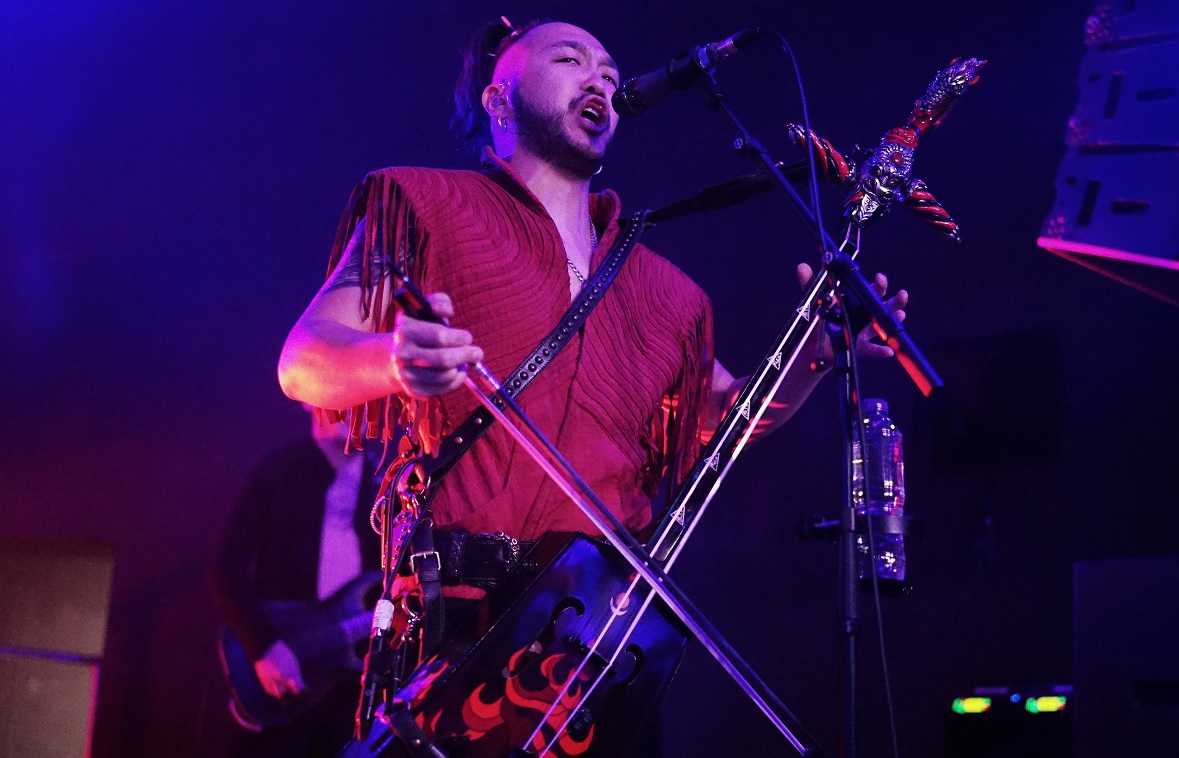 As the mists settle on the South Downs, all is silent except for a distant Mongolian war cry floating through the air on the backs of spirits of warriors past. Tonight, the call is suddenly upon us and their trusty tour bus is tethered nearby to Brighton’s very own temple of ‘Chalk’. These musical warriors are called ‘The Hu’ and they have to rock our souls on this Saturday’s eve.

No, they are not a tribute band to ‘Daltrey/Townsend’s popular rock group, but a highly successful rocking proposition in their own right. They are from Ulaanbaatar in Mongolia and were formed in 2016. Brought together by producer ‘Dashka’, who has been in the business for over 30 years and whom they treat as an extra member of the band, they have become an online sensation and many of their videos have gone viral on the likes of YouTube with millions of viewers turning into their dramatic promo videos. One of their latest videos ‘Wolf Totem’ even features Jacoby Shaddix of ‘Papa Roach’ fame. 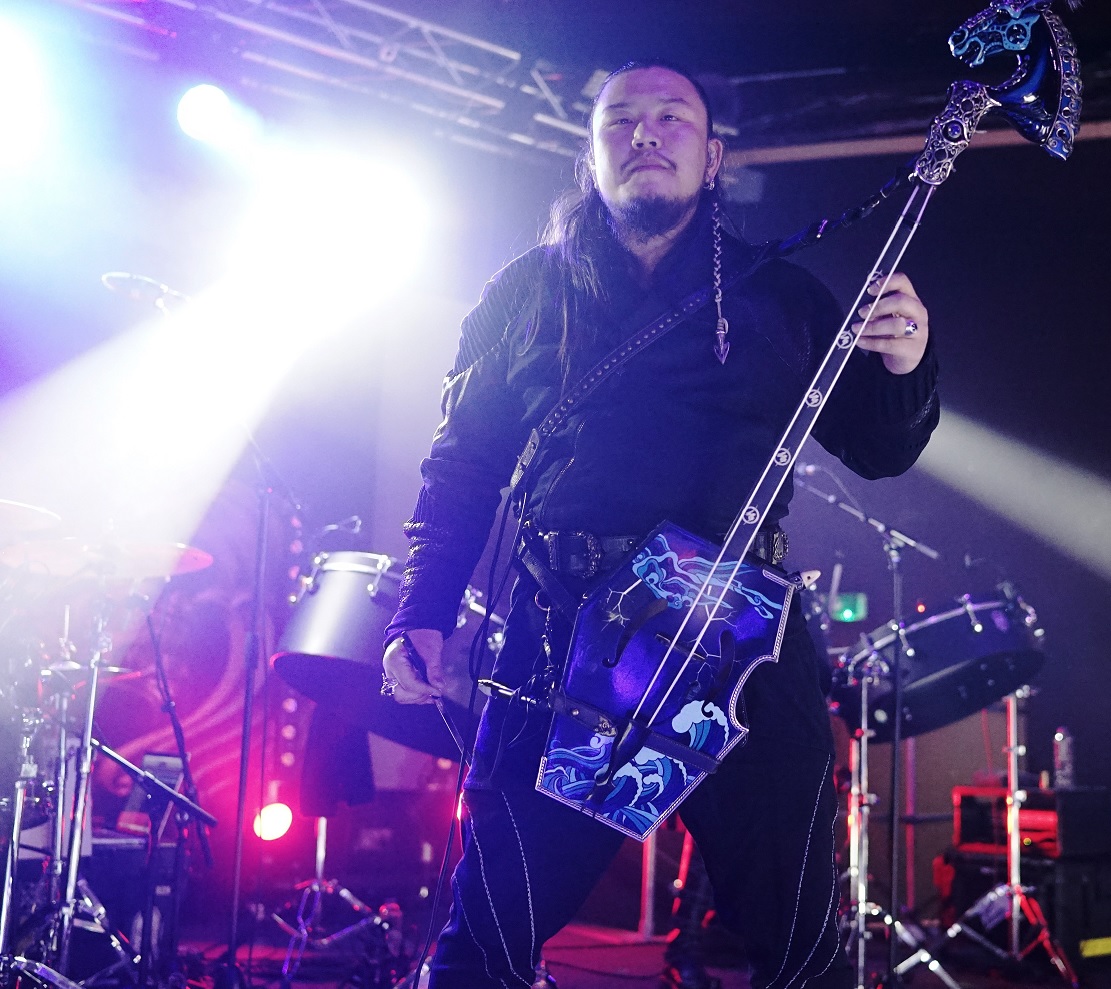 They play their own unique blend of traditional Mongolian folk music with contemporary heavy metal stylings that have captured people’s imaginations the world over. Their band leader ‘Gala’ is a classically trained musician (from the age of 11!) who completed his masters in traditional music and also plays the ‘Morin Khuur’ (Horsehead fiddle). He also sings ‘Khoomei’ which is a traditional Mongolian guttural vocal technique (also known as throat singing) which aims to mimic the sound of waterfalls and the winds of the Altai Mountains.

This melting pot of styles is what they call ‘Hunnu Rock’ – The word ‘Hu’ by the way is a Mongolian root word for ‘Human’. They have become local heroes in Ulaanbaatar and the Foreign Ministry have even appointed them as ambassadors to the outside world on behalf of the country! They are in the middle of a 23 date European tour and tonight is the first UK date, so, I think you’ll agree, all of this should make for a very interesting nights entertainment 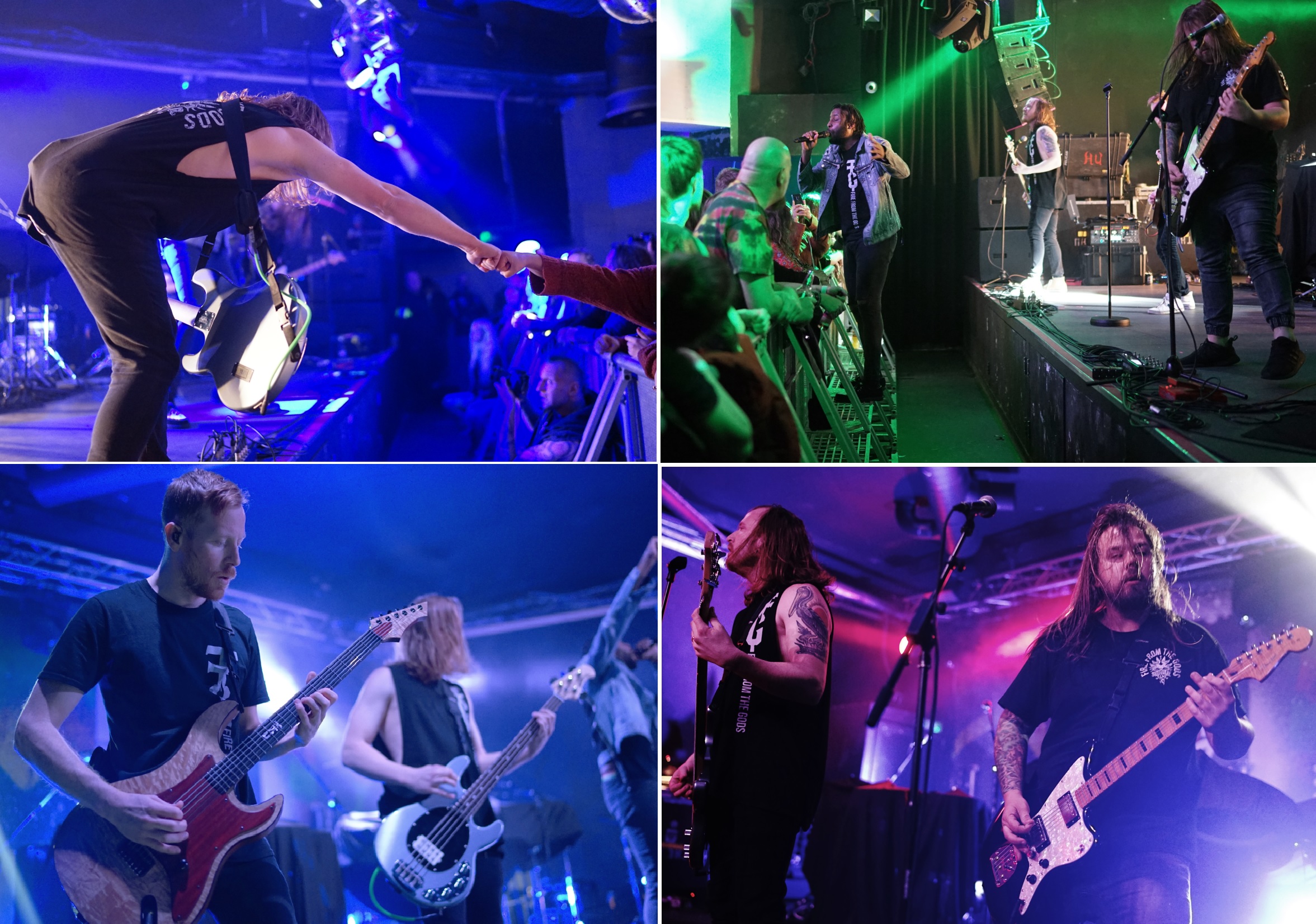 Fire From The Gods live at Chalk in Brighton 08.02.20 (pics Michael Hundertmark Photography) (click on pics to enlarge!)

First up were a band called ‘Fire From The Gods’ and upon arrival I had never seen a venue so busy for a support band. Chalk was opened up to maximum capacity and seemed almost like a whole new venue compared to a previous visit. The venue has really bridged the gap between the ‘Concorde 2’ and the ‘The Dome’ it seems.

Fire From The Gods formed in 2010 in Austin, Texas and play music in a heavy metal crossed with hip hop style. Their last album was produced by Korn’s Jonathan Davis, no less! I noticed a lot of influences in their music and ’Rage Against The Machine’ was one of them, especially in the subject matter of some of their songs. The singer (AJ Channer) said at one point that if life on this planet had any chance of surviving, we have to have humanity, whether that be gay, straight, black or white, we haves to unite and work together which is a refreshing message to hear from a metal band in these troubled times. A class act that certainly got the crowd warmed up for what was to come.

Find out more from the band’s official website www.firefromthegods.com 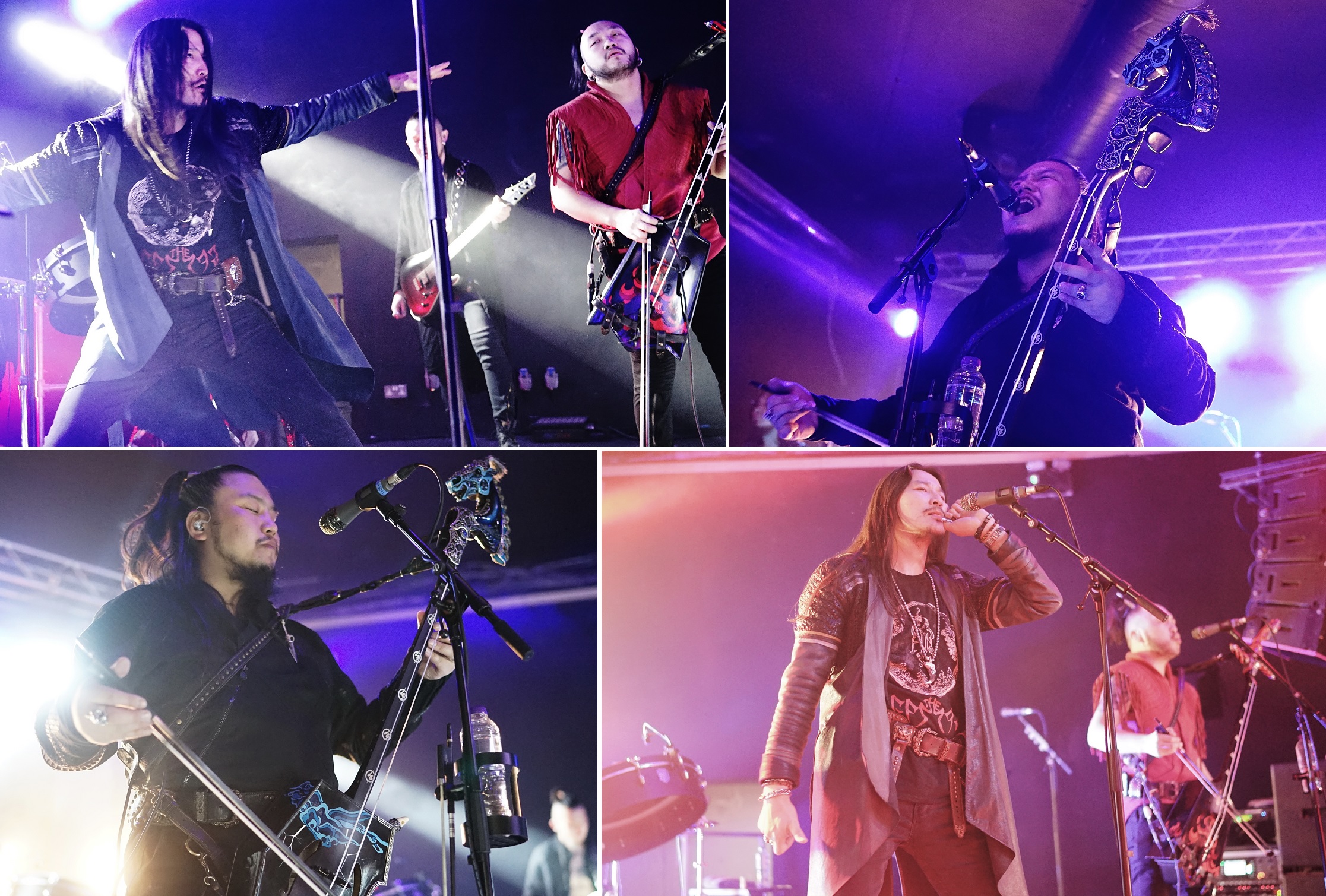 The Hu live at Chalk in Brighton 08.02.20 (pics Michael Hundertmark Photography) (click on pics to enlarge!)

And now it was time for the main event ….By this time the venue was packed to the rafters (the gig sold out well in advance). The anticipation was high and ‘The Hu’ certainly did not disappoint. They came onstage to a rapturous applause (but little to no dry ice!!) and got the room pumping from the get go. Band members tonight were Gala (Morin Khuur/Throat singing), Jaya (Tumur Khuur/Tsuur, throat singing) Enkush (Morin Khuur/Throat singing), Temka (Tovshuur/Backing vocals) and added touring members are Jamba (Guitar/backing vocals), Batkhuu Batbayar (Bass), Ono (percussion) and Odko (drums).

With so many band members on stage, they were almost like the ‘Earth Wind and Fire’ of metal! Fittingly their first song sounded dare I say it, almost like a disco tune! I could definitely get my roller disco hot pants on to that!! They then played traditional folk songs which sounded great and very atmospheric to these ears.

Before long, they played their popular song ‘Yuve Yuve Yu’ which is one of their internet sensation tunes. Its pure rock n roll and soon got the crowd singing along to its catchy chorus.

Most of their songs are of a slower pace so the mosh pit was more of ‘Slosh Pit’. I’ll coin that phrase right here so sue me later! (Caught in a ‘Slosh’ anyone?!). As the set progressed the band got heavier in style, and their ‘Metallica’ influences were shining through.

The band left the stage to the crowd chanting “Hu Hu Hu Hu” over and over again which sounded very impressive! Something I hadn’t really heard since hearing people chant “Exploited, Barmy Army” at Exploited gigs in the 80’s. They fulfilled the crowd’s wishes by playing ‘Wolf Totem’ as an encore, which seemed to deviate from the setlist. But, this was what the crowd were waiting for……The crowd including myself, were well and truly ‘rocked’ by The Hu’s hour and half set. Not many bands can pull a set of that length off but The Hu certainly did the business. I didn’t know what to expect at this gig, but was thoroughly entertained and would definitely see this band again. The closing bars of ‘Wolf Totem’ were ringing out as The Hu took a bow. Then suddenly, they were gone in a puff of smoke…..Hopefully they bring their brand of warrior rock back to Sussex soon. 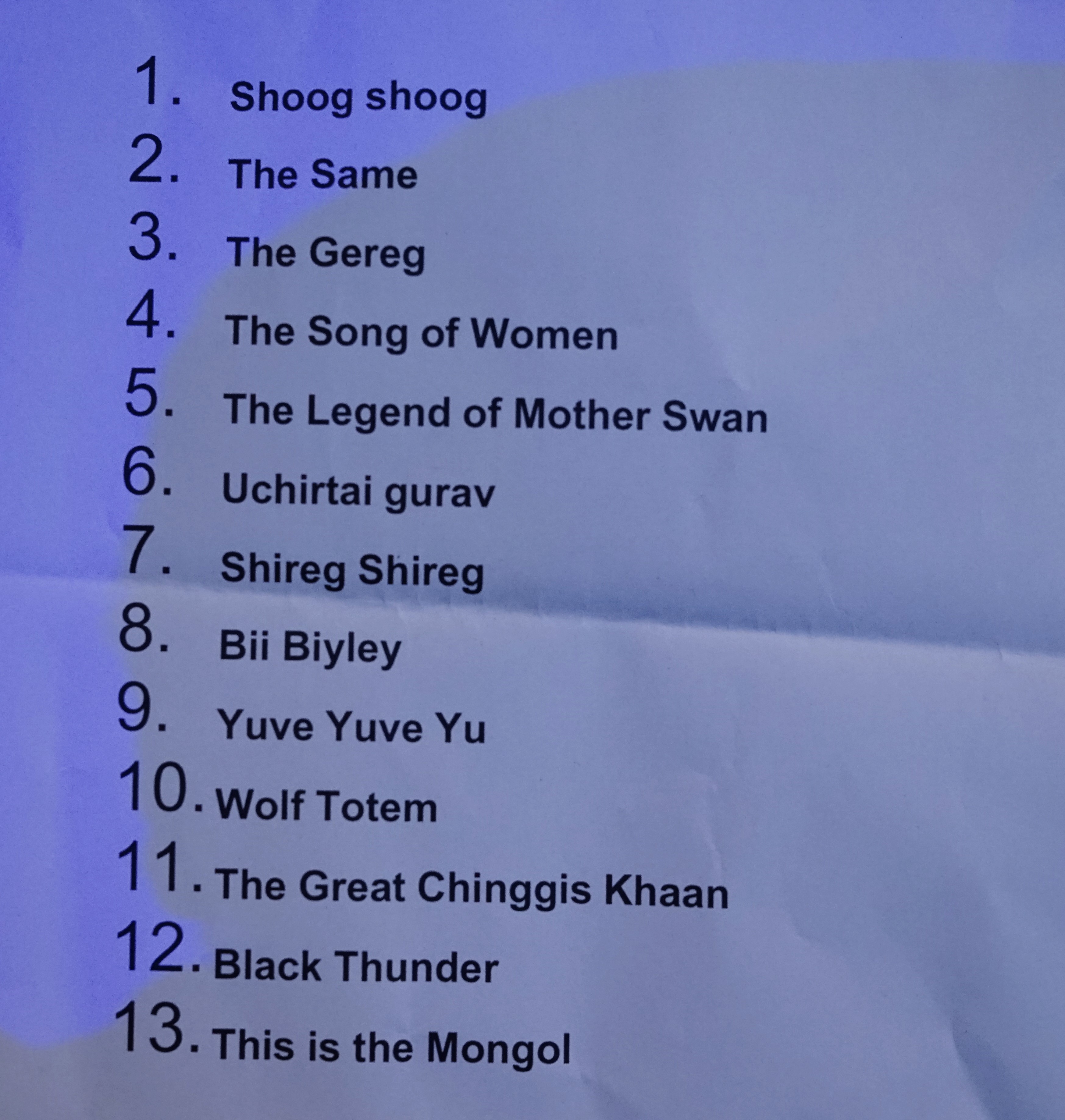 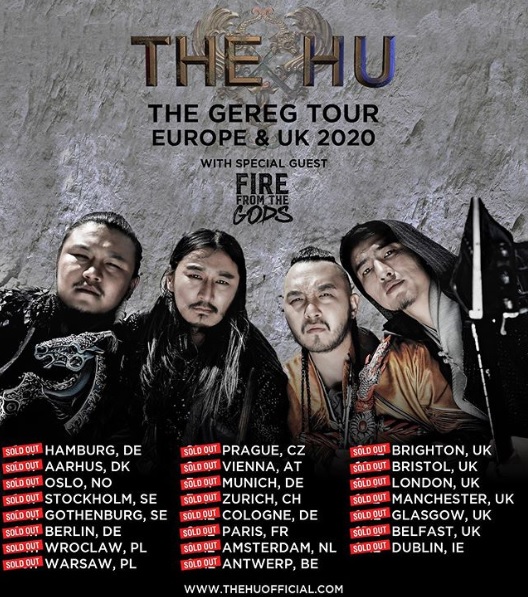 Every date of the tour has sold out!