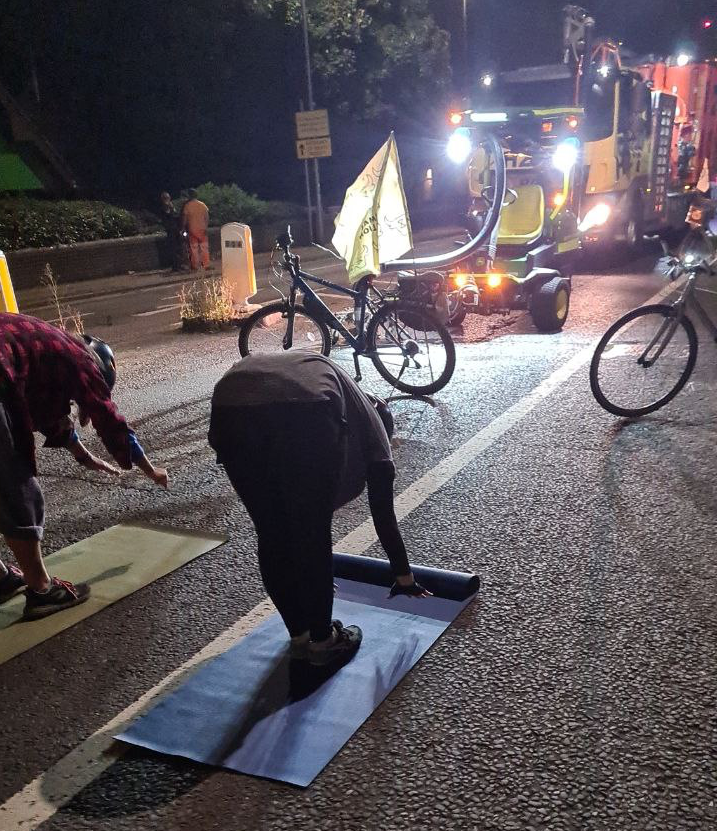 Environmental campaigners, including local parents, tried to block the removal of the Old Shoreham Road cycle lane last night – but it has now gone.

Brighton and Hove City Council has spent £75,000 on removing the lane, after Labour and Conservative councillors voted to remove it following complaints from motorists.

Even the sections which did not affect how many lanes of motorised traffic could fit on the road were taken away.

Cyclists say they are already feeling unsafe on the road, and experiencing more near misses and aggression from drivers.

And this morning, there were reports that traffic jams were still forming on the road.

Last night, activists from Extinction Rebellion and parents rolled out yoga mats and performed yoga exercises in the cycle-lane while bicycles were placed on their stands in the lane.

Parents are now planning to set up a bike train along Old Shoreham Road at school travel times, where children and adults can ride together to create safety in numbers on the road.

Brennan Holt, a spokesperson for the local group of parents, said: “It is heart-breaking to watch the removal this week. The OSR cycle lane was a beautiful thing to come out of Lockdown.

“It signified a progressive and positive step for the city, opening up opportunities for groups to cycle that would never have had the confidence before, creating links to schools, local parks and into town.

“Many people did not know about the consultation and are shocked and surprised that the lane they use daily, is now being taken out.

“My kids feel very upset and let down. They want to cycle along there like they have been. To use my 7-year-old son’s words – ‘it’s just stupid’.

“Setting up the bike train is a necessary step we are forced to take, in order to feel safe along this hazardous stretch of road.”

Isobel Pinto, a 24-year-old student and spokesperson for Extinction Rebellion Brighton, said: “Removing this cycle lane is an absolute crime.

“By taking it away, the council are putting pupils cycling to school in danger – something pointed out by the council’s own officers.

“Research has shown it did not increase congestion, contrary to what opponents claimed.

“In fact, given enough time, it will encourage people out of their cars – reducing local pollution and helping the Council to reach its climate targets.

“The fact the council can’t stand-up for this cycle lane and the sustainable transport options it facilitates, shows they’re not serious about achieving Net Zero Emissions by 2030.

“It is well-known that to avoid the worst of the climate crisis, we need to cut emissions now.

“That means we can’t wait for everyone to get electric cars. We need to shift people out of fossil-fuel powered vehicles in the immediate-term.

“Active travel infrastructure that make people feel safe when cycling, is an essential part of that.”