More roads to be closed near Brighton and Hove schools

A scheme aimed at encouraging more children to walk and cycle to and from school is to be adopted more widely across Brighton and Hove.

The School Streets scheme is also intended to deter parents from using a car for the school run by closing roads close to the school gates.

Trial schemes have taken place in streets outside five Brighton and Hove primary schools, in part as a response to the coronavirus pandemic.

A report to councillors said: “The covid-19 pandemic caused additional need for space outside schools when they returned in September 2020 to support physical distancing.”

The changes were also aimed at making the streets safer for those walking and cycling.

And now 10 more schools are to join the scheme, with Hove Junior School, in Portland Road, Queen’s Park Primary, St Mary’s RC Primary and Westdene Primary to be prioritised in the current school year.

Labour councillor Gary Wilkinson said that there was a lack of public consultation in the rush to close Queen’s Park Rise, near St Luke’s, where bollards were put in.

They will now be removed after criticisms from people living in the area who complained that, among other problems, deliveries had been affected.

A Brighton and Hove City Council report said: “Sixteen objectors perceived air quality would worsen as a result of the scheme due to the turning of vehicles at the bottom of Queen’s Park Rise.”

At the council’s Environment, Transport and Sustainability Committee meeting at Hove Town Hall on Tuesday (21 September), Councillor Wilkinson said that the bollards, at the junction of Queen’s Park Rise and Queen’s Park Terrace, had come as a shock.

He said: “People who are used to consultation prior to any decision being taken are often shocked when works commence on their doorsteps, sometimes with very little warning.

“We have been conditioned by standard consultation to think that nothing significant will be done before the views of the community have been carefully considered by the council.

“Even those who trusted their council may have wondered whether what was being done was truly an experiment. 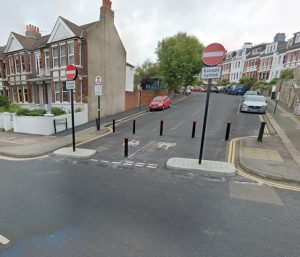 The bollards in Queen’s Park Rise in Brighton

“Meanwhile, those who were suspicious of their council tended to think that the trial was a convenient way of getting some pet scheme implemented, with a strong presumption that it would remain.”

The committee voted to remove the bollards and replace them with temporary closure measures in Queen’s Park Rise, which would operate only in term-time at the start and end of the school day.

Officials assured Councillor Wilkinson that they would also look into reinstating three parking spaces in Queen’s Park Rise which were lost to the bollards.

Labour councillor Les Hamilton said that he had received no complaints the changes to Highlands Road, Portslade, a cul-de-sac by St Nicholas CE Primary School, in Portslade.

But he was concerned about the proposed changes outside St Mary’s Catholic Primary, in Church Road, Portslade, on a corner of the A293, the main lorry route to and from Shoreham Harbour.

And Conservative councillor Samer Bagaeen was concerned about the effect on bin collections if the council partly blocked Eridge Road, close to Aldrington Primary School.

He said: “Nevill Road has had problems with bin and garden waste collections for the last year and a half. Another email has just come in to say bins were not collected on Nevill Close.

“The last thing I want to subject residents to there is further road closures similar to the ones at Queen’s Park Rise.”

A council transport project manager, Alex Voce, said that Aldrington Primary had been assessed as suitable for the School Streets programme.

The council is budgeting about £150,000 a year for the programme and may look at using cameras to enforce the road closures.