‘This Is The Modern World’ exhibition opens in Brighton Exhibition curator Nicky Weller (Paul Weller’s sister) with The Jam’s Rick Buckler (right) and Russell Hastings (From The Jam) at ‘This Is The Modern World’ exhibition 29.7.22 (pic Cherie Elody) (click to enlarge)

‘THIS IS THE MODERN WORLD’ EXHIBITION, VALLEY GARDENS, BRIGHTON 29.7.22

Coincidentally seven years ago to the very day, I attended the first exhibition of The Jam’s memorabilia ‘About The Young Idea’ at Somerset House in London, to celebrate 40 years of The Jam and it was an eye-opening look at the history of the band for all of us avid fans. Now though appropriately the all-new improved exhibition has come to the Mod capital of the UK as it opens in Valley Gardens, Brighton. It wasn’t lost on me that the preview of the ‘This Is The Modern World‘ exhibition started at 5pm on Friday and for anyone attending it was obvious that for today only just who is their 5 o’clock hero!

Personally, October 1978 was my musical epiphany. As a fourteen-year-old I had quite an eclectic taste in music having been brought up on a diet of ‘Top of the Pops’, The Beatles, Jazz, Country and Western, Traditional Scottish, but to mention some of the music played at home. As I discovered John Peel on Radio One my music tastes certainly changed, for the better in my opinion, though my parents may have argued otherwise at the time! On hearing ‘Down In The Tube Station At Midnight’ for the very first time, I was hooked. Up until that point I can’t recall any song that made me appreciate the music of a band so intensely. I had at last found a band that I could identify with. Yes, I had heard music by The Jam previously and I had liked it. I had listened to Punk, and I was liking the shock factor, but maybe I was just too young in the early days. I mean I hadn’t long since been listening to the likes of The Wombles and Abba when Punk hit! ‘Down In The Tube Station At Midnight’ though was the kick up the backside that I needed. My bedroom wall was suddenly adorned with posters of my idols and my musical identity was formed. 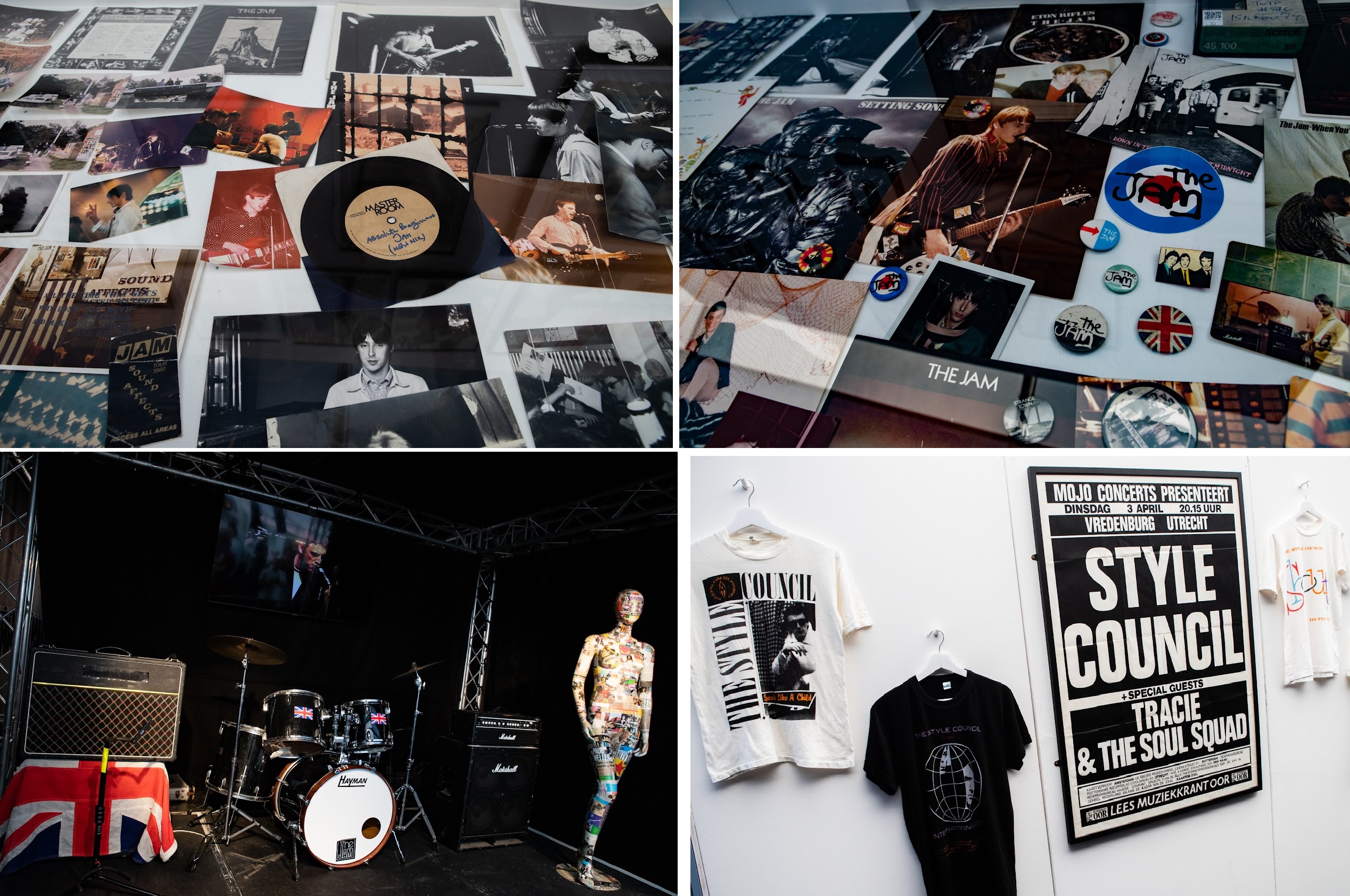 Living in a village in Scotland as a teenager I was starved of live music, so I didn’t actually get to see The Jam play live until 1981 when I moved to London and started work as a seventeen-year-old. I made up for lost time and saw them in double figures, but my world came crashing down when they split. Thankfully though Paul Weller could do no wrong in my eyes and I continued my journey following his work through The Style Council, even travelling abroad. This continued throughout his solo career, but then slowed down as family life took over. After a twenty-year hiatus, I eventually caught up with Mr. Weller on his recent tour at Brighton Centre and it was like meeting an old school friend and just starting off again where we had left. Read my review of that night HERE. I also continued to follow Messrs. Foxton and Buckler on their journeys and saw them both play live post-The Jam, buying vinyl too. So, as you can imagine this exhibition was a source of extreme excitement for me and waiting around for twenty-five minutes for the doors to open felt like a lifetime. 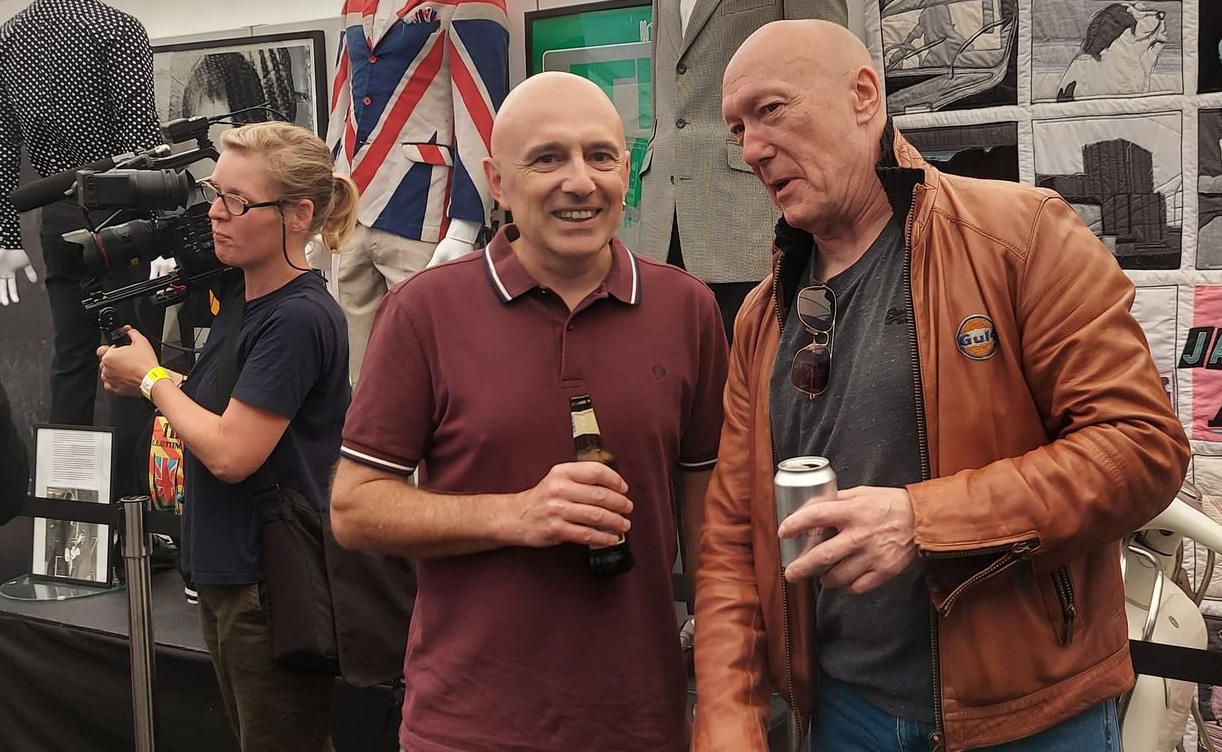 Yours truly sharing some banter with Rick Buckler at ‘This Is The Modern World’ exhibition 29.7.22 (pic Danny Gurden) (click to enlarge)

This is an extensive trip through the history of The Jam with the main focus on Paul Weller given that it is his sister’s brainchild as she has curated the exhibition. From his childhood through to The Jam and onto The Style Council days, this is a comprehensive look into family, friendships, and the music, and it’s fair to say I was engrossed from the moment I walked through the entrance to the tube station. The next 150 minutes would find me like a child in a sweet shop. Yes, I recalled a fair bit from seven years ago, but a lot has been added thanks to Nicky’s undying dedication. Nicky ran The Jam’s fan club as a teenager, also working with Paul on tour until 2010, and her hoarding skills have definitely come to the fore with some of the items on show 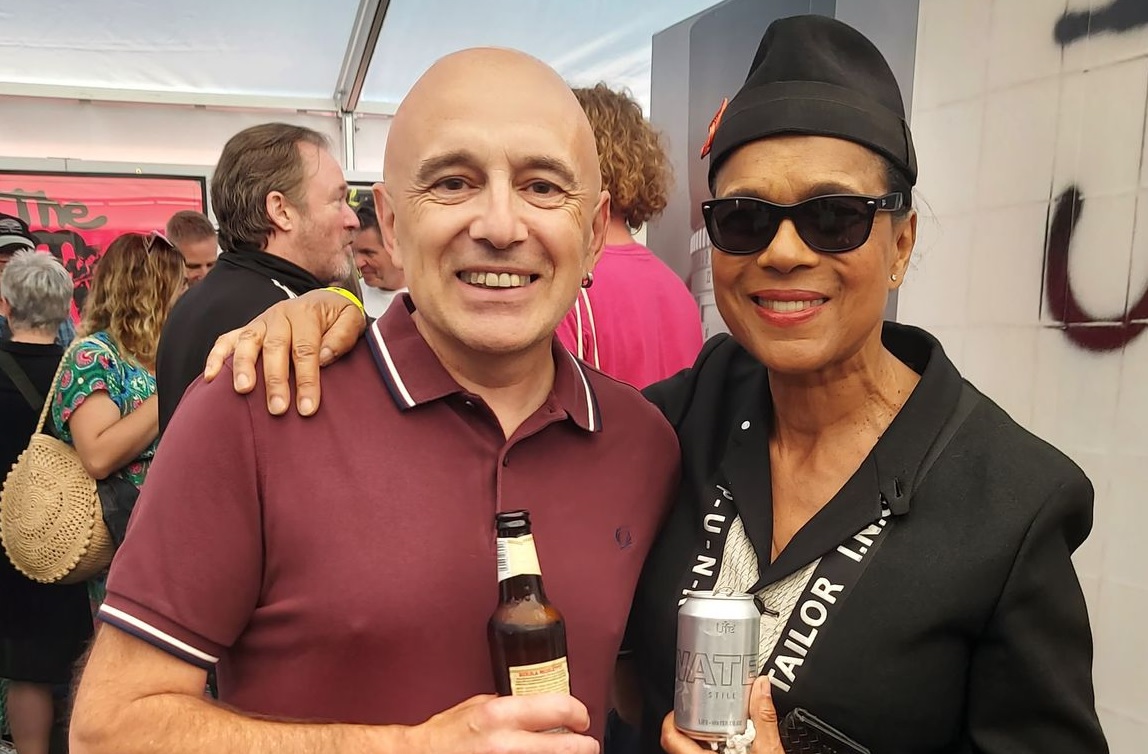 Myself (Andy Murphy) with Pauline Black from The Selecter at ‘This Is The Modern World’ exhibition 29.7.22 (pic Danny Gurden) (click to enlarge)

With past band members present in the shape of The Jam’s drummer Rick Buckler, and The Style Council’s keyboard player Mick Talbot, and lead singer of ‘From The Jam’ Russell Hastings, along with photographer from 1979 Derek D’Souza, it gave that added personal touch as they mingled with the invitation only crowd for this preview prior to the opening to the public on Saturday. With the bonus of Pauline Black gracing us with her presence before playing the evening’s opening event of this month-long exhibition a few hours later, and Rhoda Dakar, there was musical royalty everywhere I looked. Read our review of The Selecter concert that took place in St Peter’s Church after the exhibition this evening HERE. This really is a must for any fans of The Jam, The Style Council, Paul Weller, or any music fan in general. The attention to detail is brilliant and a massive mention must go to Nicky Weller for an amazing effort. Just from speaking with her briefly you get a whole different insight into ‘The Jam’ and what a family it was. For that reason alone, I would highly recommend that if you are able to, then buy a ticket for the Curator Tour run by Nicky Weller, then do so, as it will take your experience to a whole different level. 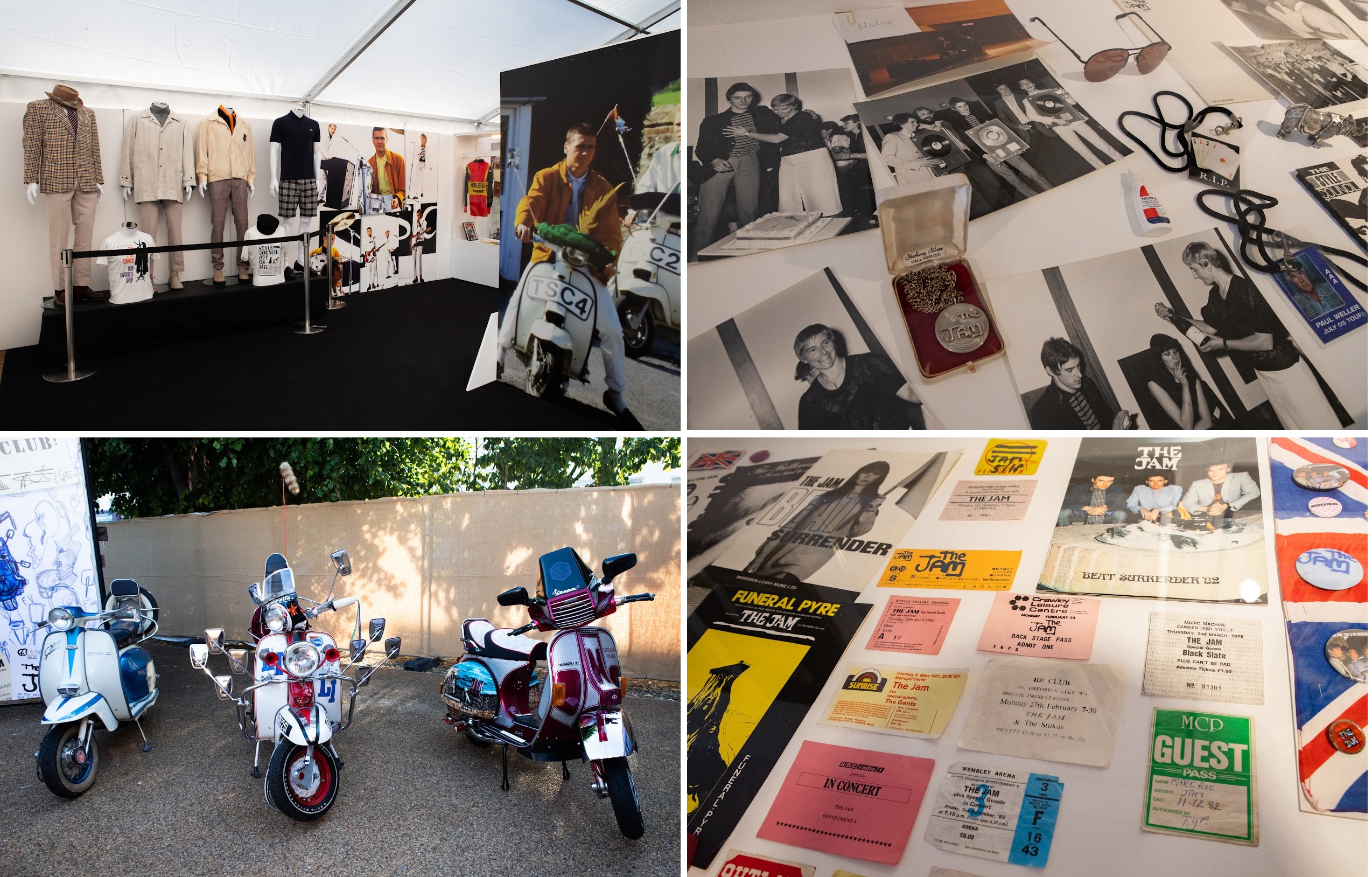 I got to hear from her about walking a lion cub in Woking, to his friendship with original guitarist Steve Brookes, and there really is so much more of interest. It really is such a personal insight as you see photos of Paul growing up. Seeing photos of Bruce and Rick with long hair seemed a far cry away from their smart Mod days. 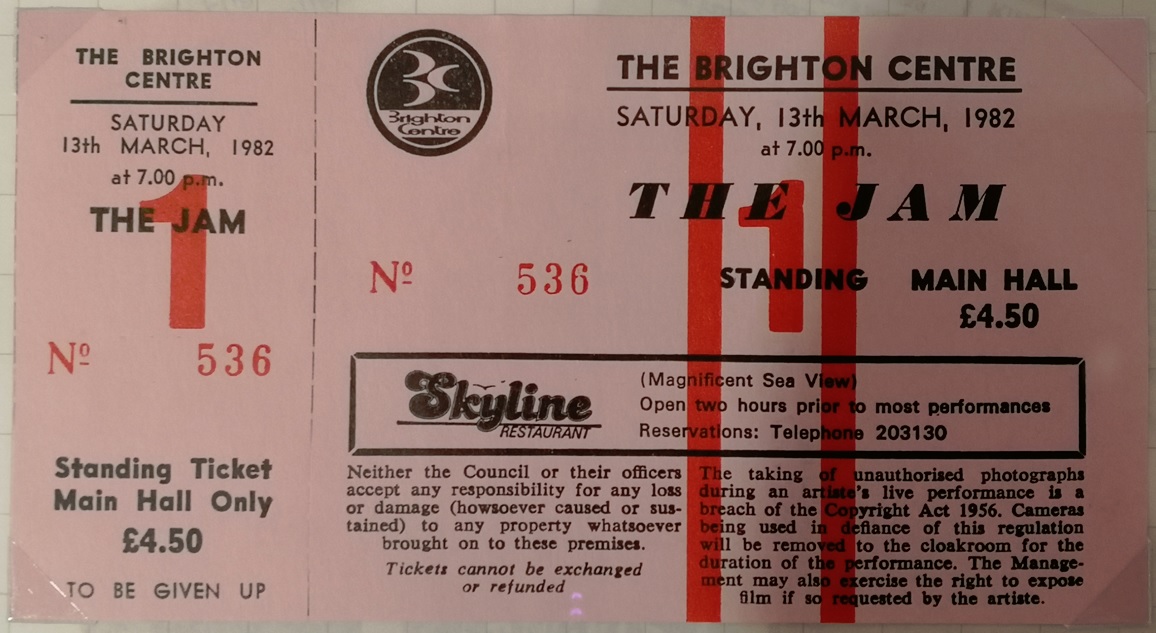 As you wander around you can pick out such gems as a trophy from Friars Aylesbury for being the ‘Sensation of the Year 1979’ and then on the adjacent wall there is the gold disc for selling 500,00 copies of ‘A Town Called Malice’. Keep an eye out for the prize awarded for finishing 13th in The Jam Wordsearch competition and the great story to go with it. 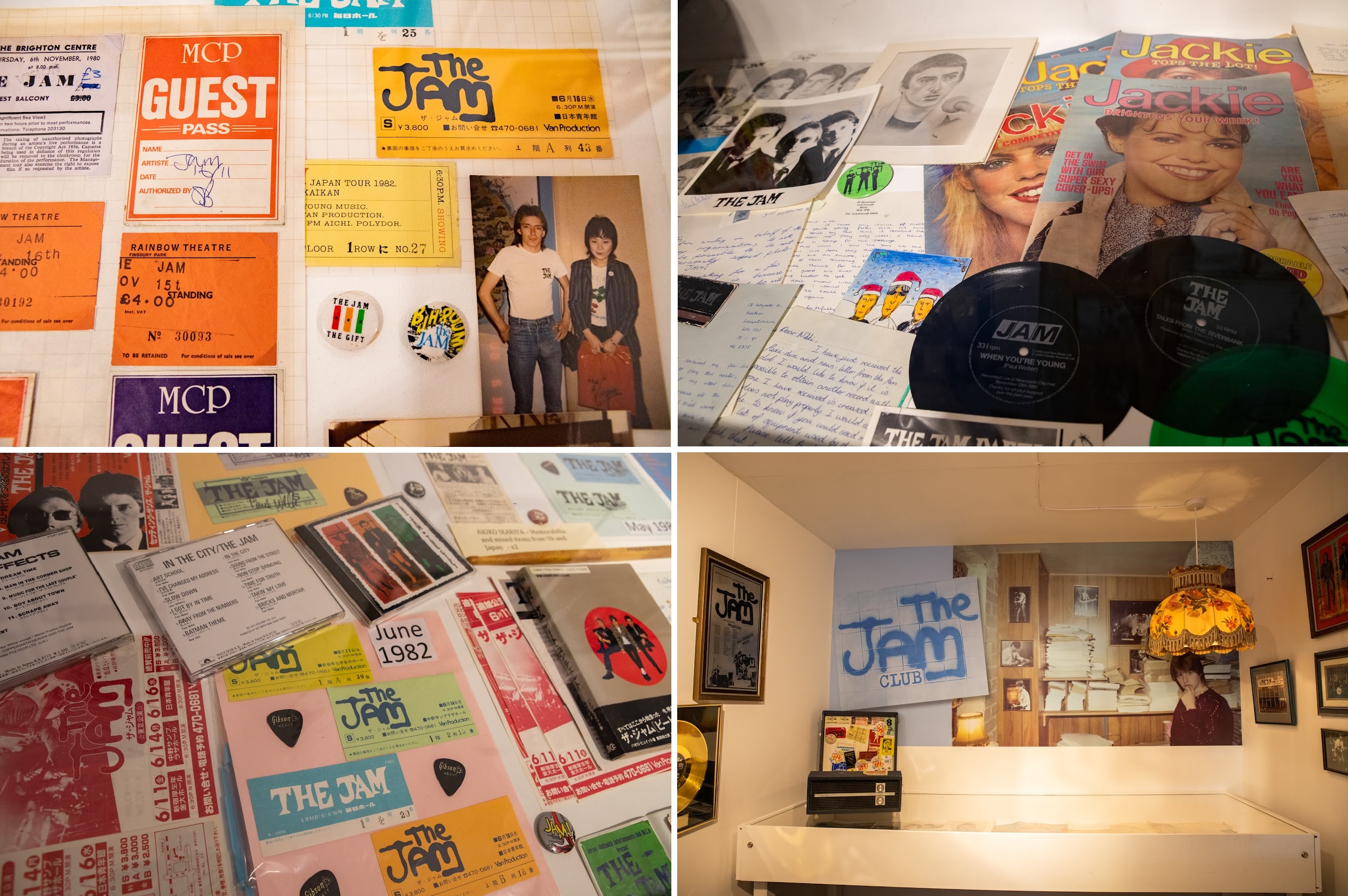 Memories of Red Wedge and the miner’s strike came flooding back, and of course there was ‘Live Aid.’ Get up close to guitars, scooters, clothing including t-shirts galore. There are continuous videos playing of concerts by both The Jam and The Style Council to keep you entertained musically as you wander around and the memories come flooding back. On speaking with Mick Talbot, I did mention the discrepancy in the listing of gigs by ‘The Style Council’ as it states that the first one was at Brockwell Park in Brixton, where Paul Weller got pelted with mud and missiles by disgruntled punks who had missed The Damned due to the slowness of the CND Rally, whereas I had seen them the week before at the Empire Theatre in Liverpool. His answer was that they had backing tracks for the Liverpool concert and had swiftly added a full band for the subsequent gig in Brixton. There will be a Q&A session with Mick and drummer Steve White on Thursday, August 25th at 7pm at St Peter’s which I’m sure will be very interesting. Purchase your tickets HERE. Also of note is a Q&A with Rick Buckler on August 10th, again a 7pm start at St Peter’s. Grab your tickets HERE. He jokingly told me not to ask any awkward questions as I might not get the answers that I want to hear, so maybe he will have some explosive revelations. I’m looking forward to his highly anticipated book on the last year of The Jam. Both he and Russell Hastings told the story of when they played at The Crypt in Hastings as ‘The Gift’, a gig which I attended, and how they got locked in the car park after the gig and had to return to Hastings the following day to pick up the car. For the record Russell Hastings did say that he is feeling better after his recent heart attack, which is great news as he keeps the legacy of The Jam alive with his energetic performances as lead singer of ‘From The Jam’ along with Bruce Foxton. They will also be playing two unplugged concerts at the wonderful St Peter’s, in conjunction with this exhibition, on August 17th and 18th, which will also be reviewed by your Brighton and Hove News team. Purchase your tickets for the 17th HERE and the 18th HERE. ‘This Is The Modern World’ is now on and runs until the 29th August 2022. The event takes place at Valley Gardens, St Peter’s Place Brighton BN2 9QB. Basically head for the island where St. Peter’s Church is located and you are there!

Exhibition open daily from 11-7pm. Evening entertainment and special events, food and drink only from 7pm-11pm.

Purchase your ‘This Is The Modern World’ exhibition tickets HERE.