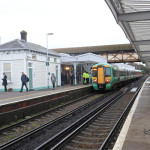 Ticket machines and information boards at Hove Station are out of order this morning following a power surge.

@rozryan there has been a power surge which as outed the machines. Conductors are aware of the situation there including ticket office

Could a new West Pier feature a hotel?