Customers desperate to get their hands on an iPhone 6 started queueing outside Churchill Square at 8pm tonight, 12 hours before it officially goes on sale. 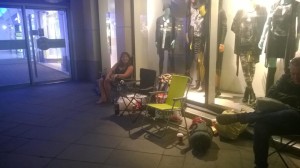 The latest iPhone model goes on sale tomorrow, and the Brighton Apple store inside the shopping centre opens at 8am.

Michelle Guyatt posted this picture of herself at the head of the queue on Facebook. 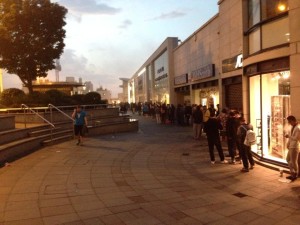 Churchill Square at dawn this morning by Josh Bishop

By 9pm, about 25 people were outside the shopping centre, which opens at 7am, an hour before the Apple store itself.

And by 7am, their numbers had swelled to about 300, with the queue snaking back past WH Smith.

A busy night shift with 29 immediate response calls and 6 arrests made. In addition there are 300 people queuing o/s apple for the iPhone 6!

However, Brighton iPhone enthusiasts have nothing on those in London, who started queueing on Wednesday last week.

Today, a homeless charity announced it was auctioning off its space in the queue to raise money and awareness. 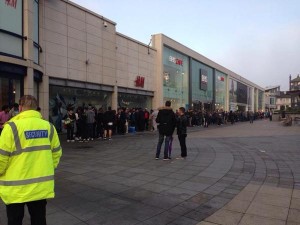