The Hippodrome in Brighton is the theatre building most at risk, according to the Theatres Trust.

The annual register lists Britain’s most “at risk” theatre buildings. It includes those under threat of demolition and redevelopment, theatres that lie abandoned, neglected and decaying and theatres in use at risk of closure.

The Hippodrome, in Middle Street, tops the list of 33 theatres this year after Brighton and Hove City Council approved plans to turn it into a cinema and restaurant complex. 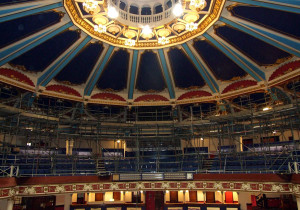 Conservative cabinet minister Eric Pickles is considering whether to “call in” the plans to convert the grade II* listed building.

If he does, a public inquiry will take place before Mr Pickles, the Communities and Local Government Secretary, makes the final decision.

The Theatres Trust said: “Designed by Frank Matcham, the theatre is of national significance as one of only three remaining Victorian circus theatres in the UK.”

Mhora Samuel, director of the trust, said: “The Theatre Buildings at Risk Register really raises awareness of the plight of many of our most threatened theatres.

“It makes people much more aware of the beautiful and much-loved theatres that could be lost forever if action is not taken.

“This year we’ve reduced the number of theatres on the register to focus on those that need time, resources and investment if they are to be saved.

“The big question on the horizon is the extent to which more local authority cuts will lead to further closures. It’s certainly a very worrying trend.

Councillor Geoffrey Bowden said that the Hippodrome had been derelict for years and was previously a bingo hall. It hasn’t been used as a theatre since 1965.

Councillor Bowden, chairman of the council’s Economic Development and Culture Committee, said that no one – other than the current owner Kuig Property Investments – was prepared to put up the millions of pounds needed to restore the building.

The plans involve demolishing some parts of the building but preserve most of its key features.