The city is bracing itself for three more day-long bin strikes starting next week after pay talks once again broke down. 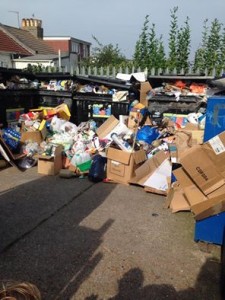 The GMB,which represents many CityClean staff, today met with Brighton and Hove City Council officers in the latest round of pay talks which centre on how much bin lorry drivers are paid.

However, the talks have ended without any resolution, and futher strikes have now been called on next Thursday 25 September, Tuesday, 30 September and Wednesday, 3 October from 12.01am until 10.59am over all three days.

Mark Turner GMB Branch Secretary said: “We’re very disappointed that once again we’ve attended a meeting with the council and they have been unable to show any willingness to meaningfully seek a resolution of this dispute.

“We have once again re-iterated to management that we don’t simply seek more money, for the position or grade that drivers currently hold, but that if they incorporate the additional personal and operational management responsibilities into the drivers role which we have pointed out to them, they would see an improved, more efficient and cost effective service as a result.

“Unfortunately to date management are refusing to discuss, consult on or even acknowledge our proposal, so our members have been left with no other option and we have to issue further notice of industrial action.

“We of course remain open to any continuation of dialogue with the council on this matter, but as they are remaining intransigent in not discussing the matter, it is not going to see this dispute end unfortunately any time soon.

“Whilst we understand the inevitable effect this further issuing of dates for further industrial action will have upon the people and businesses of the city, we hope residents will continue with the generally high level of positive support and comments, which members have reported to us they have been receiving on a daily basis and our assurance that we are doing everything we can to resolve the issue quickly, but that ultimately we need willingness from the council for that to happen.”

A statement on the council’s internal website reads: “[The council was]  unable to meet their demands of increasing the pay of refuse and recycling charge hand drivers as there have been no changes to these roles and this would break with our job evaluation scheme.

“The discussions will continue but as no resolution was made the industrial action is going ahead.”