A marketing manager from Brighton has been fired from the BBC TV show The Apprentice in the second episode of the latest series.

Lord Sugar accused the 25-year-old of bottling out, having ducked the challenge of leading one of the two teams on the show this evening (Wednesday 15 October).

Mr Goodwin had been a clear hint by Lord Sugar that he should take control of the task – creating and selling wearable technology. 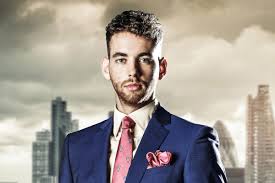 A candidate is usually fired from the losing team after a boardroom analysis of what went wrong and who was to blame.

But Mr Goodwin didn’t even make that far before Lord Sugar pre-empted the finger pointing and said: “I don’t like people who bottle out so, Robert, you’re fired!”

He said that he would have been better suited to leading a task involving luxury fashion rather than wearable technology.

Lord Sugar said that Mr Goodwin ducked responsibility because he felt that the task was beneath him.

On the sister programme, The Apprentice: You’re Fired, he admitted that he should have taken the project manager role, saying: “It was a mistake and I have learnt from it.”