Darren Bent has signed for Brighton and Hove Albion until the end of the year.

The club said that it had “completed the signing of 30-year-old striker Darren Bent from Aston Villa on an initial month’s loan until the end of December”.

He will start training with his new teammates to prepare for the match on Saturday (29 November) against one of his former clubs Fulham. 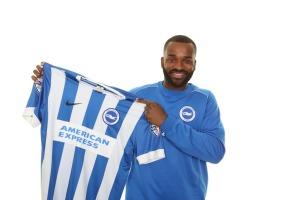 Manager Sami Hyypia said: “We are delighted to welcome Darren to the club and I hope he will score plenty of goals for us during his time with us.

“His record speaks for itself. He is a top-class striker with a more than 100 Premier League goals with Charlton, Spurs, Sunderland and Aston Villa.

“Three years ago he was a regular in the England squad under Fabio Capello.

“There is no doubting his ability to score goals.

“He also wants to play regular games and that is evident in his willingness to step down from the Premier League to the Championship.”

Tooting-born Bent began his career with Ipswich Town during which time he vied with former Albion favourite Bobby Zamora for England under-21 recognition.

He made 43 starts and 36 appearances from the bench for Spurs, scoring 25 goals for the club.

As a result Aston Villa paid a club record sum to sign him. The £18 million fee has the potential to rise to £24 million.

Bent spent last season on loan at Fulham scoring six times from 14 starts and plus 15 appearances as a sub before returning to Villa Park at the end of last season.

Overall Bent has made 53 starts and 19 appearances off the bench for Villa, scoring 25 goals for Villa since his move in January 2011.

This season he has made seven appearances as a sub in the Premier League, the most recent in the 1-1 draw with Southampton on Monday (24 November).

New Brighton theatre to open with the Treason Show

Boy, 5, knocked over by ambulance outside Brighton hospital