Eubank, 25, from Hove, is unbeaten in 18 professional fights, winning 13 with a knockout.

The former Brighton College pupil did, however, lose his final bout as an amateur in America six years ago.

He was just a year old when his father Chis Eubank beat Nigel Benn to become the WBO middleweight champion at the NEC in Birmingham. 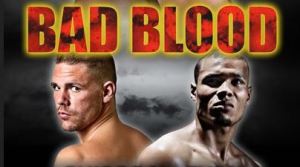 In Saunders the young Eubank faces the most formidable opponent of his three-year professional career.

Saunders, also 25, is the British, European and Commonwealth middleweight champion and boxed for Britain at the Beijing Olympics as a welterweight. He was previously unbeaten in 49 consecutive amateur contests.

Over the past five years Saunders has won all 20 of his professional fights including 11 knockouts.

Welwyn-born Saunders is known as the Caravan Kid because of his Romany Gypsy background.

He and Eubank are fighting on the undercard as Tyson Fury takes on Dereck Chisora in the WBO heavyweight title final eliminator.