WITH VIDEO: Brighton is said to one of the UK’s most haunted cities – but so far, most reported activity has happened firmly above ground. 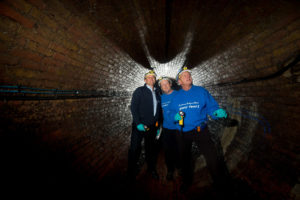 However, after workmen in the sewers beneath the streets reported an increase in ghostly goings on, Southern Water opened them up to a group of paranormal investigators.

And on Tuesday night, armed with equipment to sense radio waves, electromagnetic activity, temperature – not to mention their own sixth senses – two groups of ghost hunters got to work – and Brighton and Hove News was invited along to see what they found.

Before the investigation started, tour guide Stuart Slark explained: “When we walk up the safety passage, you’re standing in there and in the corner of your eyes you get a shadow. We have had these big metal doors just close.

“Robert Smith here was working with another colleague Stephen Jackson doing some work down here, standing waist deep in the sewer, and Steve felt himself get pushed out of one of the small sewers. He came out as white as a sheet.

Robert added: “A lot of the other guys didn’t believe him, but he’s not one for giving you any balls.” 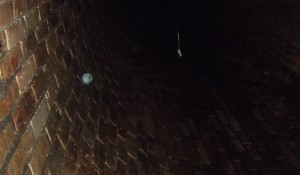 And there could be a grim and ghostly explanation as three people are believed to have died when the sewers were built in the 1870s. Stuart said: “They used to say if they died down below, they buried them below.

“There’s a panel down there we know nothing about, no records. We don’t want to disturb it just in case.”

The sewers are an eerie place to be at the best of times, with howls and rattles echoing through the Victorian brick tunnels – but most noises can be put down to dogs, rattling manhole covers combined with the spooky acoustics.

However, it was up to the teams from Ghostly Shadow Events and South East London Paranormal to discover if there was anything more to it – and before the official investigation had already started, one ghosthunter said he had already sensed a presence.

John Downey from Ghostly Shadow Events said: “I came up from a quick look at the sewers just now with Stuart, and out of the corner of my eye, there was someone standing in the tunnel, and he didn’t have a hard hat or any safety stuff on.”

John and his wife Jane from London plus another couple, Mark and Sue Sims from Kent, make up Ghostly Shadow Events, which carries out paranormal investigations that people can pay to watch. 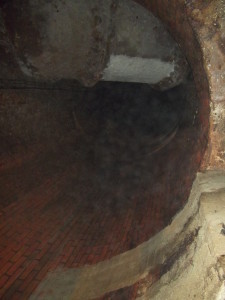 Ghosthunter Callum Bignall’s picture with mist in the tunnel

The devices they use, which range in price from about £35 to £180, include a voice recorder which plays back audio as it records it in case spectral voices have been picked and a teddy bear fitted with motion sensors and flashing lights.

They also brought a white noise generator and a ouija board to communicate with any spirits they encountered.

John said: “The most activity we’ve recorded was at Westgate near Margate in Kent, an old Bupa hospital, which had been a school and a military building before that.

“We sensed that something was lurking in the shadows. I said stop lurking and when we went back over the recording, you could hear a voice swearing back at us.”

He added: “I remember reading as a child that walking down the high street, for every 10 people you pass, one could be an alien or dead.”

Before the groups descend into the sewers, Stuart jokes: “If there’s anything weird going on, I’ll be the first one up through the door. Especially with that luigi board.”

And it doesn’t take long before John senses something – again, in the safety tunnel, this time over the sewer where Stephen Jackson felt himself being pushed.

He says: “As we were over the place where the worker felt himself being pushed under in that area of the tunnel we were standing in the darkness and I felt a little tug from behind me.” 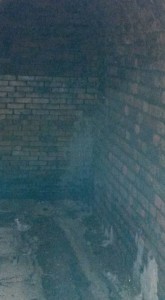 Later, Callum Bignall from South East London Paranormal shows me pictures of the sewer which he believes are of potential paranormal interest. In one, a fog has appeared which is not visible in the other pictures. In another, a mottled white spot is clearly visible, which he believes may be an orb, or a spirit made visible on film.

He said: “It’s not reflections. It seems to have a weird surface to it. That’s not going to be light reflection from the flash or a shiny part of the tunnel.

“If it was a droplet of water it wouldn’t be that large. We need to get it home and enlarge it and further debunk it.”

Back on ground level, it’s time for the group to attempt to speak to the spirits John sensed, and the white noise generator then the ouija board are brought out.

But despite Jane Downey coaxing and reassuring any ghosts to come forward, nothing is heard. The ghost hunters agree that the flash photography, and the fact health and safety meant the board couldn’t be used down in the sewer itself, meant it was unlikely to have worked in any case.

The investigators are still examining their findings, and Southern Water has returned to clearing the sewers of other horrors such as congealed cooking oils, wipes and cotton buds incorrectly flushed down household drains.

Until the mid-1800s, the bulk of Brighton’s household sewage drained into cesspools at the back of properties.

This unpleasant arrangement changed in 1860 when the town council resolved to build a system that would drain into the sea. With no hydraulic diggers or power tools, they relied on manual labour and built a sewer system that still serves Brighton.

Victorian bricklayers took hundreds of tonnes of sand from the beach to make ‘pug’ to cement millions of bricks and visitors can still see shells encrusted in the mortar. The city would quite literally be in a mess without it.

Stuart Slark added, “We had a Sixth Sense something ghoulish was going on but didn’t know whether The Uninvited was a Blithe Spirit. We didn’t need an Exorcist but decided to Ring the Ghostbusters and hope It will signal the end of this Paranormal Activity.”