New Brighton pizzeria could be start of chain

The man behind new Brighton pizzeria Fatto a Mano and the North Laine cafe Bread and Milk says he would like both to be the first in two new city chains. 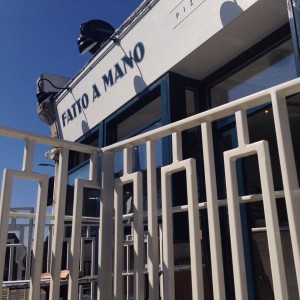 Rupert Davidson, who was head of development at London chain Benugo, says both concepts have the potential to expand within Brighton and Hove.

Fatto a Mano, which opened in London Road this summer, prides itself on its red and white (i.e. with or without tomato sauce) Neopolitan pizzas, and has quickly become a neighbourhood hit.

Speaking to industry newsletter Propel, Mr Davidson said: “At this point I want to produce amazing pizza and give customers exceptional service. When I feel we are nearly there then I will look at another site but I won’t ever plan to head into central London – instead I will be looking for up and coming areas, which don’t have crazy rents. I would be looking at about 60 covers and even up to 80, but no higher.

“At the moment we only need 25 diners in here and we have an amazing buzz; maintaining this atmosphere is really important.”

He also said Bread and Milk is about to be redesigned to give the brand “more definition” and spoke of opening another store with the bakery part more visible.

Lettings agents to be targeted by Brighton and Hove tenants protests

Child homelessness in Brighton and Hove four times higher than 2010