Roadworks, one-way streets and traffic jams make negotiating the roads around Brighton Station tricky at the best of times. 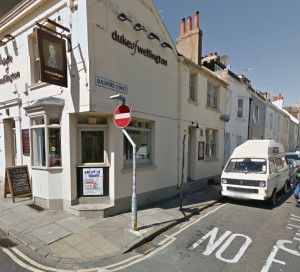 But now vandals have added to the confusion with a spate of road sign rotations around Upper Gloucester Road, which have been reported via the FixMyStreet website.

they include no entry signs, a priority sign and a warning children crossing sign. No clues have been left as to whether the sign turning is the work of a disgruntled motorist, pranksters or someone else.

However, City Cabs boss and chair of the Queens Road Traders Association Andy Cheesman said he hadn’t noticed any effect from the rotated signs.

He said: “We have seen no increase in traffic at all – it’s a nightmare round here all the time.”

A council spokesperson said: “Signing that may cause safety issues are dealt with within 24 hours of the report being received by officers and other signage on a seven day turnaround.

“Our team will be checking these out if they have been reported to us.”