A cyclist was taken to hospital with serious head injuries after his bike crashed with a taxi at the Clock Tower in Brighton on Friday night. 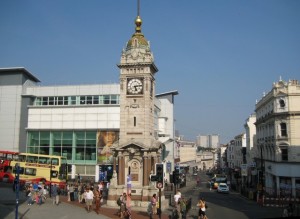 Police are now appealing for witnesses to the crash, which happened at around 11.50pm and led to the road being closed for some 30 minutes.

The cyclist, a 38-year-old local man, was taken by ambulance to the Royal Sussex County Hospital, Brighton, with serious head injuries. His condition was later described as critical but stable.

The driver of the white Peugeot taxi, a 42-year-old local man, was unhurt.

The area was busy at the time with pub-goers and others out enjoying the evening, and police are keen to speak to anyone who saw what happened.

They are asked to email collision.appeal@sussex.pnn.police.uk or phone 101, quoting Operation Badsworth.