The other schools taking part were St Luke’s, who finished a close second, and Elm Grove who took third place.

Max Wilson from year 5 at St Andrew’s was overall winner. Runner up was Karl Newland and the bronze went to Jack Dickinson.

Brighton Table Tennis Club, which organised the championship, runs coaching sessions in each of the three schools, and many of the players who took part in the championship play regularly at the club in its new home, the Fitzherbert Centre, in Upper Bedford Place, Kemp Town.

The event also introduced many children in years 4, 5 and 6 to the sport and the club for the first time. 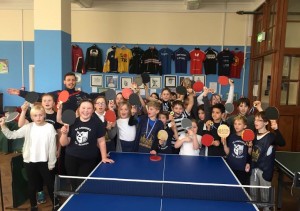 “The children from our school loved the thrill of competing at such an excellent venue but also got to learn how important it is to congratulate opponents and respect umpires.

“The fact that eight-year-old girls can play in the same venue as a 60-year-old Chinese man and one of the UK’s top table tennis Downs Syndrome players makes such an event inclusive and inspirational.”

Brighton Table Tennis Club (BHTT) is open seven days a week at the Fitzherbert Centre for players of all ages and abilities.

It is a local community club and registered charity holding weekly sessions for a wide range of groups, among them primary school children, under 16s, over 60s, people with learning disabilities and looked after children. Two women-only sessions are held each week.

More than 260 students play across three campuses each week at City College where BHTT provides coaches for six weekly sessions. And the 50+ session at the King Alfred Leisure Centre, in Hove, has an average of 40 players each week.

BHTT is Table Tennis England’s National Table Tennis Club of the Year 2015. It is one of the country’s biggest clubs and employs 10 coaches. It has an expanding programme with more than 1,000 people playing table tennis each week across Brighton and Hove.