Two Brighton mums have praised the hundreds of people who signed a petition to make a children’s playground safe after park workers replaced equipment and carried out repairs.

The first repairs were carried out at Farm Green Park, in Bevendean, yesterday (Tuesday 22 March).

More than 500 local people have signed their petition which is due to be presented to a meeting of Brighton and Hove City Council tomorrow (Thursday 24 March). 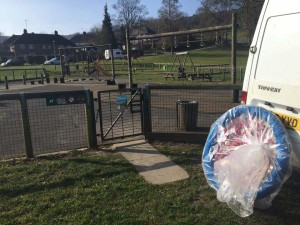 The petition was started by Jayne Van Rensburg and Claire Jacobs, from Bevendean, after they were told that the council could not afford to replace broken play equipment in the playground.

Instead the council paid staff to remove it.

They said: “The wheel swing and baby swings have been repaired and parts have been ordered for the roundabout.

“The balance beam has still not been improved or the flooring which is still hazardous and mouldy.

“There’s not enough to do in Bevendean as it is, so a park is essential for healthy constructive play for parents and children. 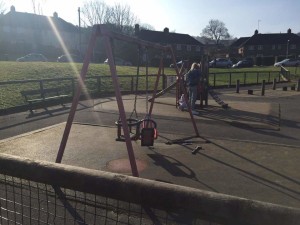 “We’re so thankful for all those who have taken the time to sign the petition and share it online. We hope more people will sign it before we present it to the council tomorrow to encourage the council to help us further.

“We’re glad the council has responded so quickly after we started the petition and held a meeting with our ward councillors Dan Yates and Anne Meadows.”