Longhill High School is proud to buck the national trend of a falling A* to C pass rate. More than half Longhill’s students, 56 per cent, achieved 5 A* to C grades including English and Maths.

This result shows a six percentage point increase on last year’s results, with many subjects seeing an increase in progress compared with expectations at previous key stages.  In particular, English and maths have seen exceptional improvement, with maths at national average level and English significantly above.

Message from the head

New head teacher Kate Williams, said: “This is such a fantastic achievement and is a result of hard work and resilience from students and staff.

“Longhill is a dynamic school, an asset to its community, with a dedicated staff and we will all continue to work hard to achieve great results for our students.”

Longhill’s top performing students were Liam McCann, who gained six A*, three A and two B grades, and Rebecca Bridges, who gained five A*, four A and one B grade.

Liam said: “I feel ecstatic. I have done lots better than expected. Next year I will study double maths and physics at BHASVIC and then go to uni.”

Maths teacher Mr Ous said: “It is the best day of the year. In maths, results have improved at three and four levels of progress. We are not only focusing on those who get C and D grades, everyone has the opportunity to shine.”

Alfie Hammond got four As, three Bs and two C grades. He said: “I feel quite chuffed. I am very happy.” Next year he will take biology, chemistry and economics A levels at BHASVIC. 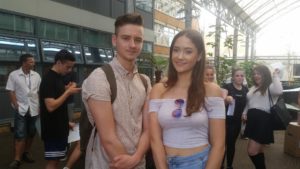 Alisha Gilbert is really happy too, particularly for getting an A in English literature and a B in English language against the odds. She will join Alfie at BHASVIC to study maths, chemistry and physics.

Elliot Aeberhard met his expectations. He achieved one A*, three As, one B and four Cs. Next year he will study physics, biology and art.