Brighton and Hove Albion have broken the club’s transfer fee record with the completion of the signing of Colombian international winger Jose Izquierdo today (Sunday 20 August).

Izquierdo, 25, joins Albion from Club Brugge for an undisclosed fee – reported to be £13.5 million – subject to international clearance. His contract will run until June 2021.

Albion said: “The club completed the final part of the transfer earlier today, and subject to receiving the necessary clearance in time, he will make his debut in Tuesday night’s Carabao Cup tie against Barnet at the Amex.

“Albion agreed terms with Brugge and Izquierdo more than a week ago but had to apply for work permit clearance in order to secure a UK work visa and register the transfer which breaks the club’s record fee paid for the third time this summer.”

Seagulls manager Chris Hughton said: “This has been a very complex deal but I am absolutely delighted we are finally in a position to confirm it is completed.

“I would like to thank all those involved for their hard work and am delighted Jose is now able to begin work.

“He has already been in Brighton and Hove for a period of time and has been able to meet his new colleagues but has not been permitted to train with us – so he is now very keen to get started and we are looking forward to working with him on the training pitch.

“He’s a very exciting player to watch and along with that excitement he will bring pace and creativity to the team.

“He also has an excellent goalscoring record. Subject to international clearance we expect fans will get their first sight of him on Tuesday night.”

Izquierdo, who will wear the number 19 shirt for Albion, comes from the Colombian city of Pereira.

He began his professional career with his hometown club Deportivo Pereira. He moved to Once Caldas in 2013 before joining Club Brugge in 2014.

In his three years with Brugge he helped them win the Belgian Cup during his first season, in 2014-15, and the Belgian League a year later – when he won the Golden Shoe, Belgium’s Player of the Year Award. 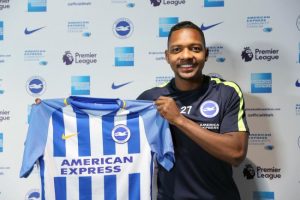 This summer he was called up by the Colombian national team and played in summer friendly matches against Cameroon and Spain, scoring once.

He is expected to be named in Jose Pekerman’s squad for Colombia’s upcoming World Cup qualifiers in Venezuela, on Thursday 31 August, and at home to Brazil on Tuesday 5 September.

Hughton, speaking at the time the club announced terms had been agreed, said: “Jose is someone we have been aware of for some time and has been one of the standout players in the Belgian league over the past three years.

“He’s been an exciting player for Club Brugge and in the season he helped the club win the title, in 2015-16, he was also Belgium’s Player of the Year.

“Jose has good experience with almost 250 senior games in both Colombia and Belgium and has played in the Europa League, Champions League and international football, having made his debut for his national team this summer.”