By : Tim Hodges from the Amex
Comments: 3

But who’d have thought it would be number 70, James Tilley, who made it first on to the Seagulls’ 2017-18 scoresheet.

A much-changed Albion looked energetic from the off and were afforded so much more time on the ball by League 2 Barnet.

Anthony Knockaert was industrious and had a couple of half chances early on and it was good to see Rohan Ince back in the stripes. In fact Ince with time to roam and pick out a pass looked as composed as he did when he broke through into Oscar Garcia’s Albion team.

As it got darker so Albion’s extremely bright new floodlights wowed the fairly sparse crowd. 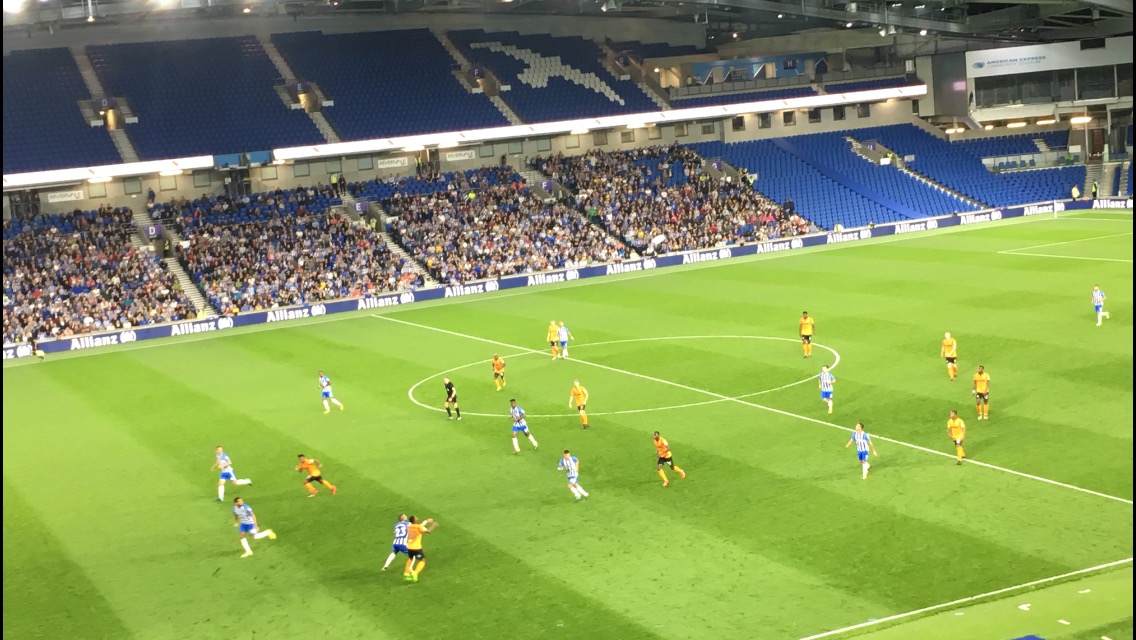 Liam Rosenior also looked composed at right full back and his mobility could yet give Chris Hughton a nice selection problem soon.

However industrious the Seagulls were, so Barnet wanted their say. Jamal Campbell-Ryce looking dangerous as the Bees growing into the match kept possession.

Mauro Vilhete had a good chance for Barnet, as did Jack Taylor who saw a cracking effort curl just over.

The more possession Barnet had, the more confident they became although the Albion back four of Rosenior, Uwe Hünemeier, Gaetan Bong and Connor Goldson looked like they only had to step up a modicum to cope with the the threat.

The Seagulls were lucky though not to concede a penalty when a short back pass from Rosenior saw Niki Maenpaa rather clatter Shaq Coulthirst. The referee thought otherwise and gave a goal kick.

Albion picked up the initiative with Richie Towell pulling the strings in midfield.

But it was fellow Irishman Jayson Molumby who started the move that culminated in Albion’s goal. Molumby found Rosenior in space. His shot was blocked and Tilley slammed home the rebound for his first senior goal. And surely the highest numbered scorer ever in Albion colours.

Albion looked to get a second to put the match to bed. Jiri Skalak seeing a good shot saved by Craig Ross. Skalak looked out of sorts and at times his close control was woeful for an international player of his standing.

Skalak and Towell both saw shots blocked on the edge of the area as the clocked ticked down.

But Barnet weren’t done with. Simeon Akinole hit the outside of the post from an almost impossible angle.

Albion were struggling to get the ball clear in the final few minutes, Akinole again with a chance. But he headed into the side netting. Even though it was right in front of the Barnet fans, quite a few seemed to think the effort had gone in.

All in all a workmanlike performance, by effectively Albion reserves. A win, a goal and a chance for a big home tie in the third round.

Next up an away trip to Watford at Vicarage Road in the Premier League this Saturday (26 August).

Don’t miss The KVB at The Joker in Preston Circus, Brighton on Tuesday 21st November