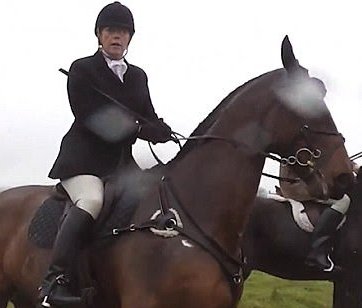 Two hunt saboteurs have launched a private prosecution against a huntswoman who was filmed hitting a masked man with her riding crop in a viral video.

Jane Goring, 57, appeared at Brighton Magistrates Court on Thursday afternoon where she pleaded not guilty to two counts of assault at Hailsham on 18 November last year.

She is accused of assaulting Shirley Makin, a member of Brighton Hunt Sabs, by “riding her down” and of beating Simon Medhurst, from South Coast Sabs, with a riding crop.

For her first appearance at court, Mrs Goring, of Rabbits Farm, Darlington, Heathfield, who has tousled blonde hair, wore black calf boots over cream trousers, a black t-shirt, a multicoloured scarf and a long black coat, which had a poodle brooch pinned to it.

Her husband Richard, 79, was in court to support her.

During the proceedings, Andrew Walker from the Crown Prosecution Service was asked to review the files. District Judge Tessa Szagun gave him a deadline of 25 October to decide if the CPS would take over the prosecution.

A trial date of 10 January was set, with proceedings moved to Hastings District Court. However, given the “high profile” nature of the case, District Judge Szagun agreed to schedule it for a time when she could continue to proceed over it.

A day was set aside for the trial. Mrs Goring, who was at court in answer to a summons, was released on unconditional bail.