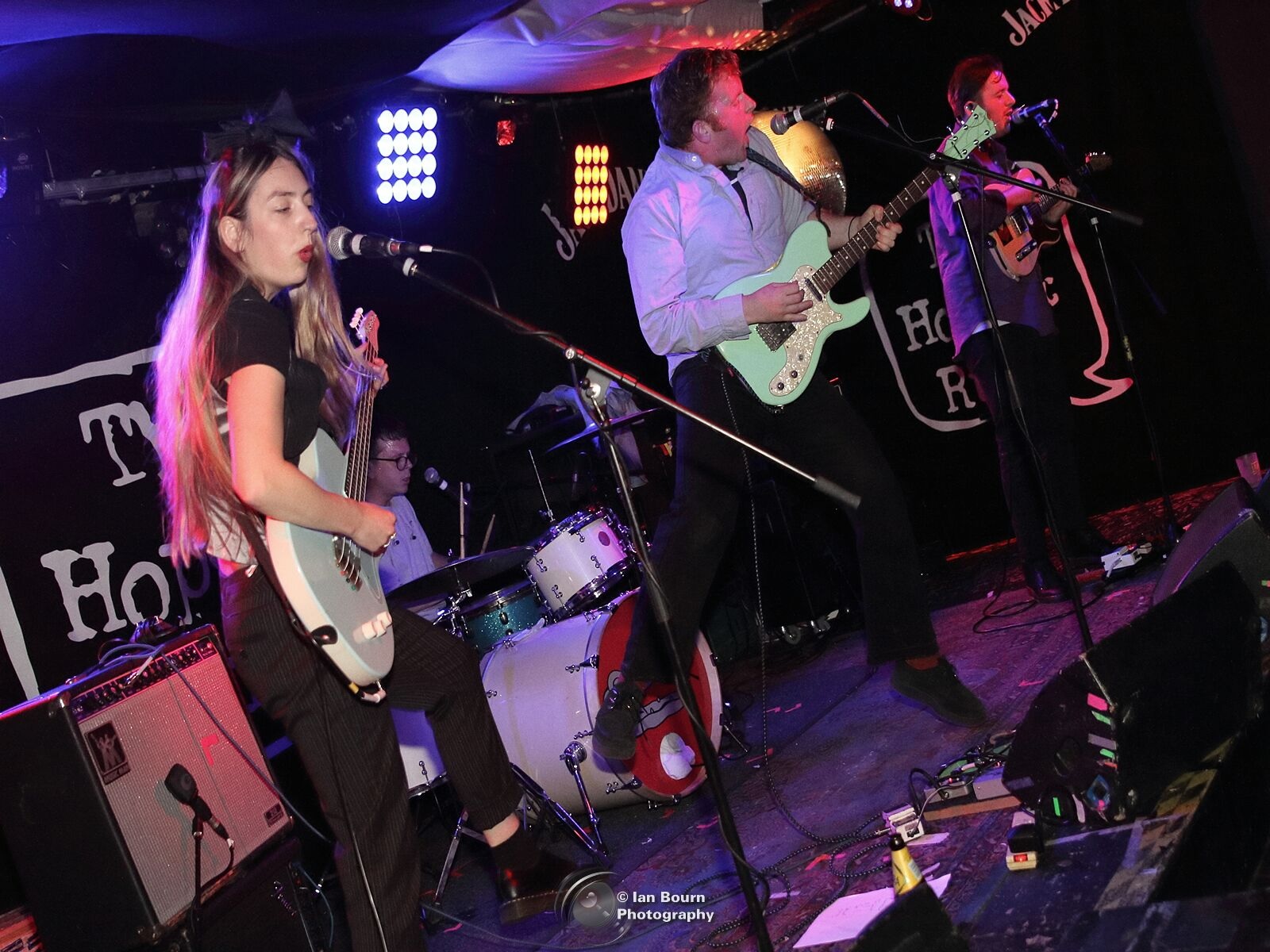 As I mentioned in the preview for tonight’s headliners – “SuperGlu is a name certainly not one to be sniffed at!” They have set out on a 10-date UK tour, which includes an appearance this evening at The Hope & Ruin on Queens Road, Brighton.

Harry Saunders the Brighton and London A & R Man for the Manchester based promoters ‘Scruff Of The Neck’, ensured that tonight’s event was value for money as the mainly young student punters got their grants worth, with four acts being put on for just £7 inc booking fee. On the bill were the aforementioned SuperGlu as headliners, with main support coming from Demonstrations, with assistance by Saving Throw and Nagasaki Dog. 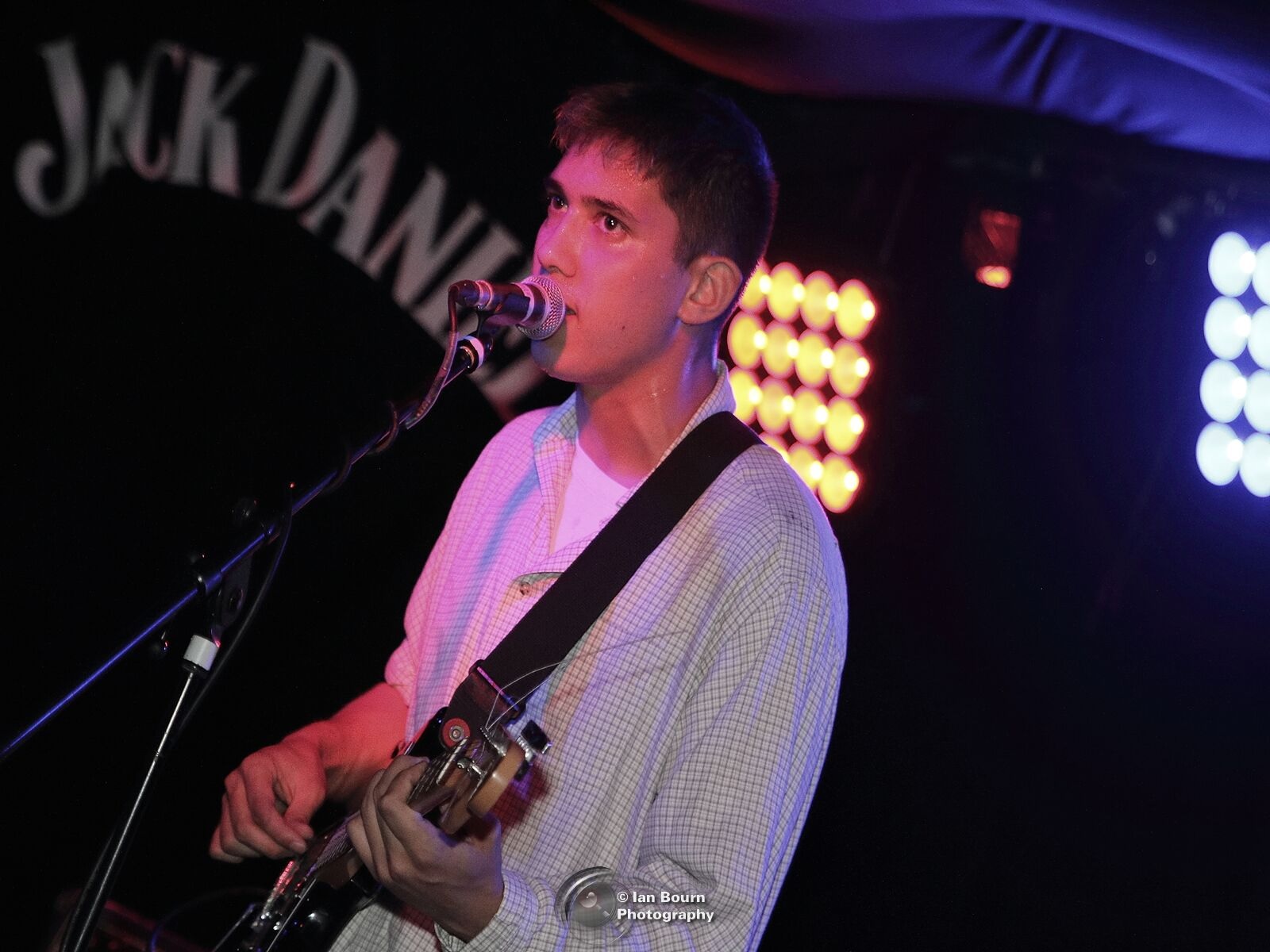 Surprisingly so for a rainy Monday evening, the event was rather well supported and no doubt this didn’t go amiss with the opening act, the intriguingly named Nagasaki Dog. Turns out that it was just one guy and his electric guitar. The young chap took to the stage and got on with it, singing his heart out with his eyes mainly closed. We did secure a photo of them open though. The longer his busker style set went on for, the more in confidence he grew. It’s fair to say that he gave it his all, something which was picked up by the punters and their applause was dutifully delivered. One or two times during his set, he did vocally sound like Richard Hawley, whom I have a soft spot for. 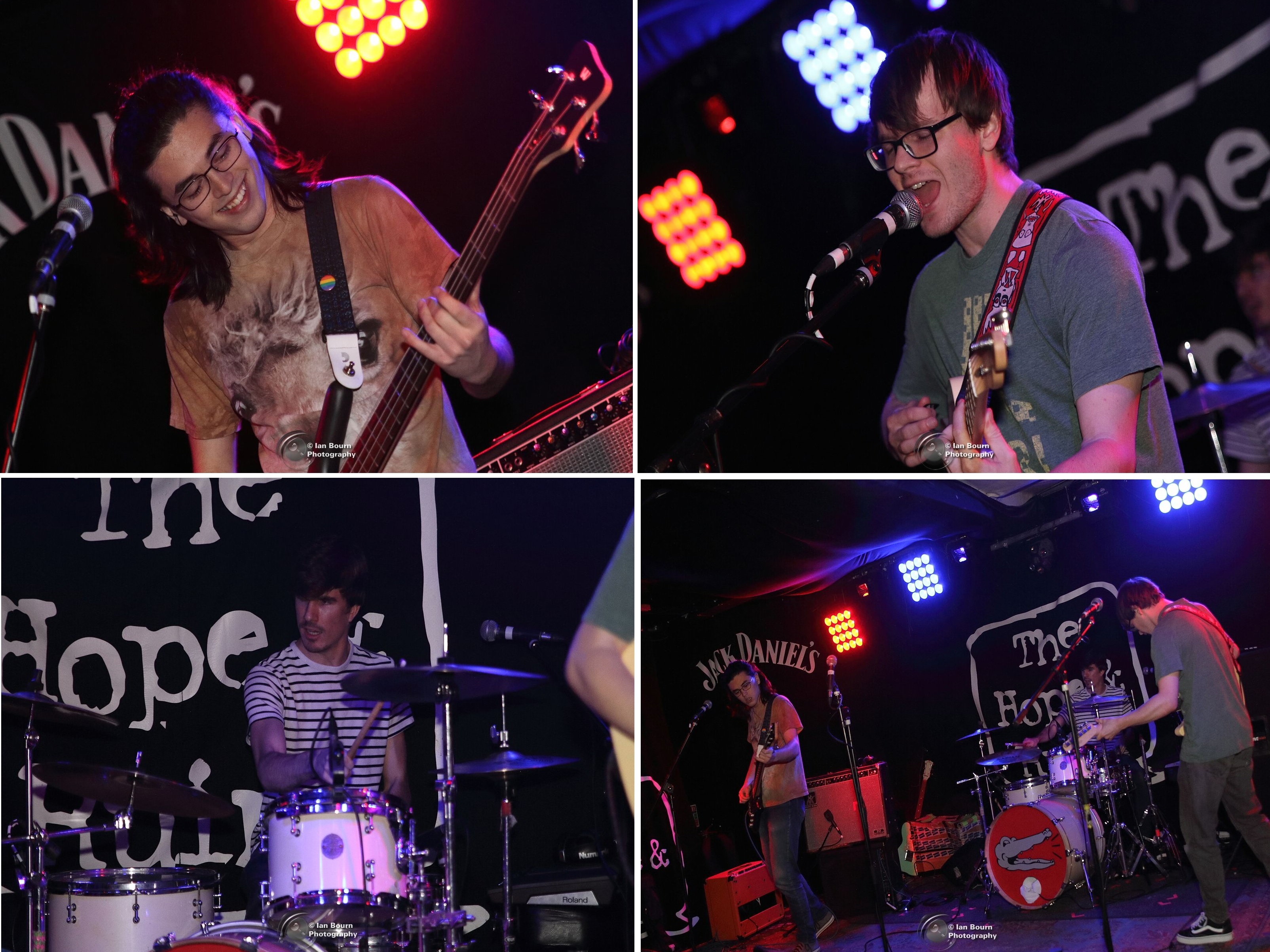 Next up it was the turn of Brighton based Saving Throw, who incidentally looked even younger than Nagasaki Dog. We spoke to them after their set and I can recall one saying that he was aged 21. They are a trio featuring Isaac Adams, Matt Austin, and Dominic Rae and are a likeable bunch! Their biog reads “Born in the darkest depths of the University of Brighton and raised on a strict diet of organic moss and hand-ground sand, Saving Throw has broken free of the lecture hall and taken to the streets to upset your mum with energetic indiemopunk tunes laced with noise and ibuprofen”.

I certainly wouldn’t say that their toe tapping indie pop music would upset many parents, in fact it’s actually rather inoffensive, especially compared to other bands that I have seen during the course of the past week. They are obviously learning their craft and seem to enjoy getting up and performing for the punters and asking them “If they were a dog, then which one would they be?”. This theme carried on well past their set. Oh these psychology students eh! Even their last track was called ‘Animal Friend’. 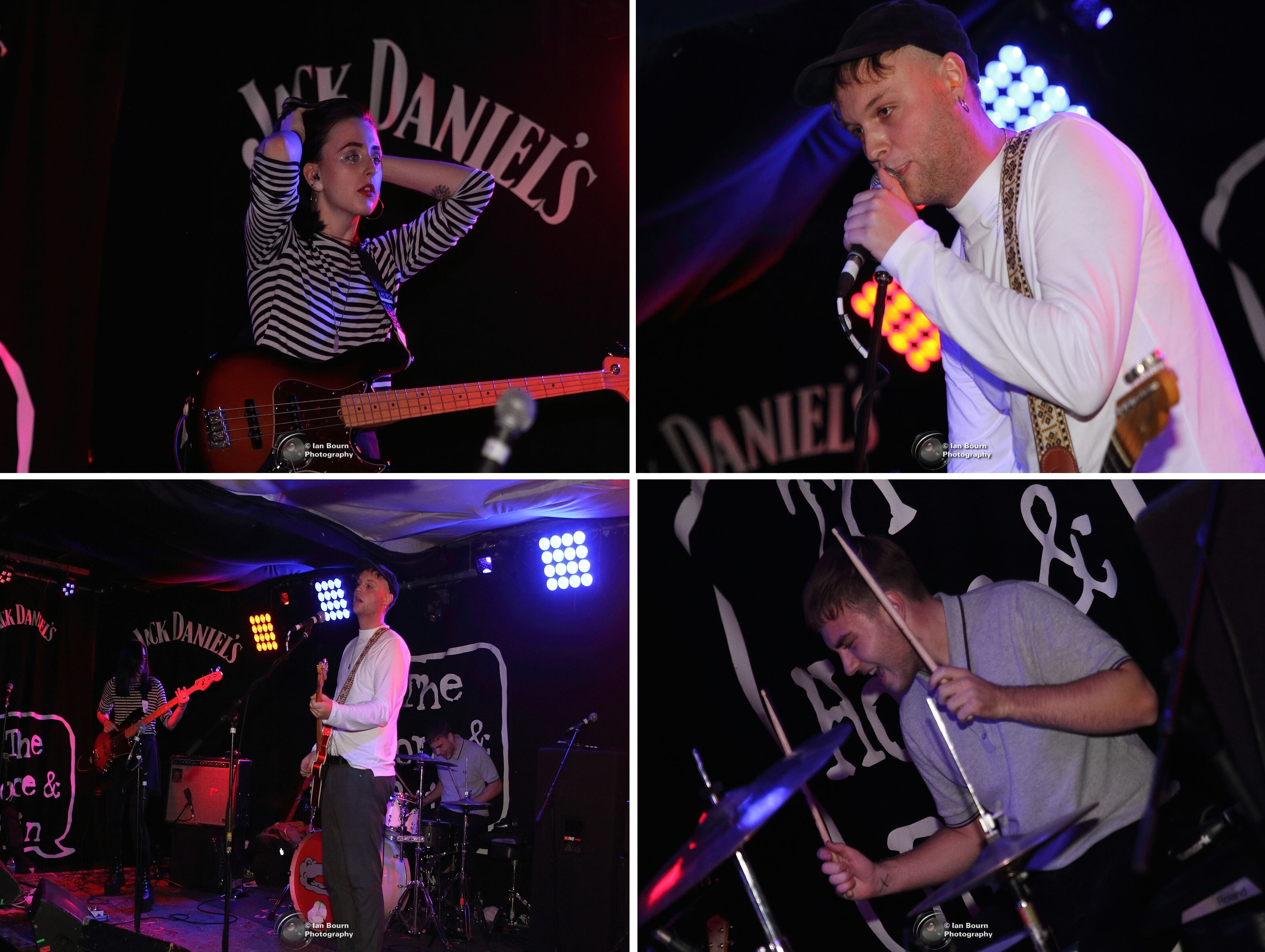 It was time for Demonstrations, to grace the stage. This Brighton and London based trio consist of Jess (bass), Callum (drums), and Luke (vocals/guitar). These guys certainly upped the ante for the night and looked and sounded like a band further down the music avenue of life than those had gone before. I remarked to vocalist Luke after their set that he certainly had the presence of a frontman and Jess’s EMB/Goth boots certainly complimented her modern bass girl look. I suggested that she check out Gaye Advert from punk band The Adverts as she had ‘the look’ and sure could play bass. Should have also informed her about Suzi Quatro and Tina Weymouth too, oh well.

The Demonstrations set certainly had more oomph and although difficult to pinpoint, their sound was a decent blend of a modern take on indie post punk coupled with a slight noise rock element. I could certainly hear the bass sounds, which were heading towards giving Jah Wobble a run for his money, and there were elements of Joy Division and Iggy Pop. Talking of which Luke had a hip swivel thing going down akin to Mr Pop. They have catchy numbers and I can imagine with more hard work, that a possible chart hit might materialise.

Catch them next in Brighton at Patterns on Wednesday 6th November, where they will be sharing the bill with YAK and The Roves – snap up your tickets HERE. 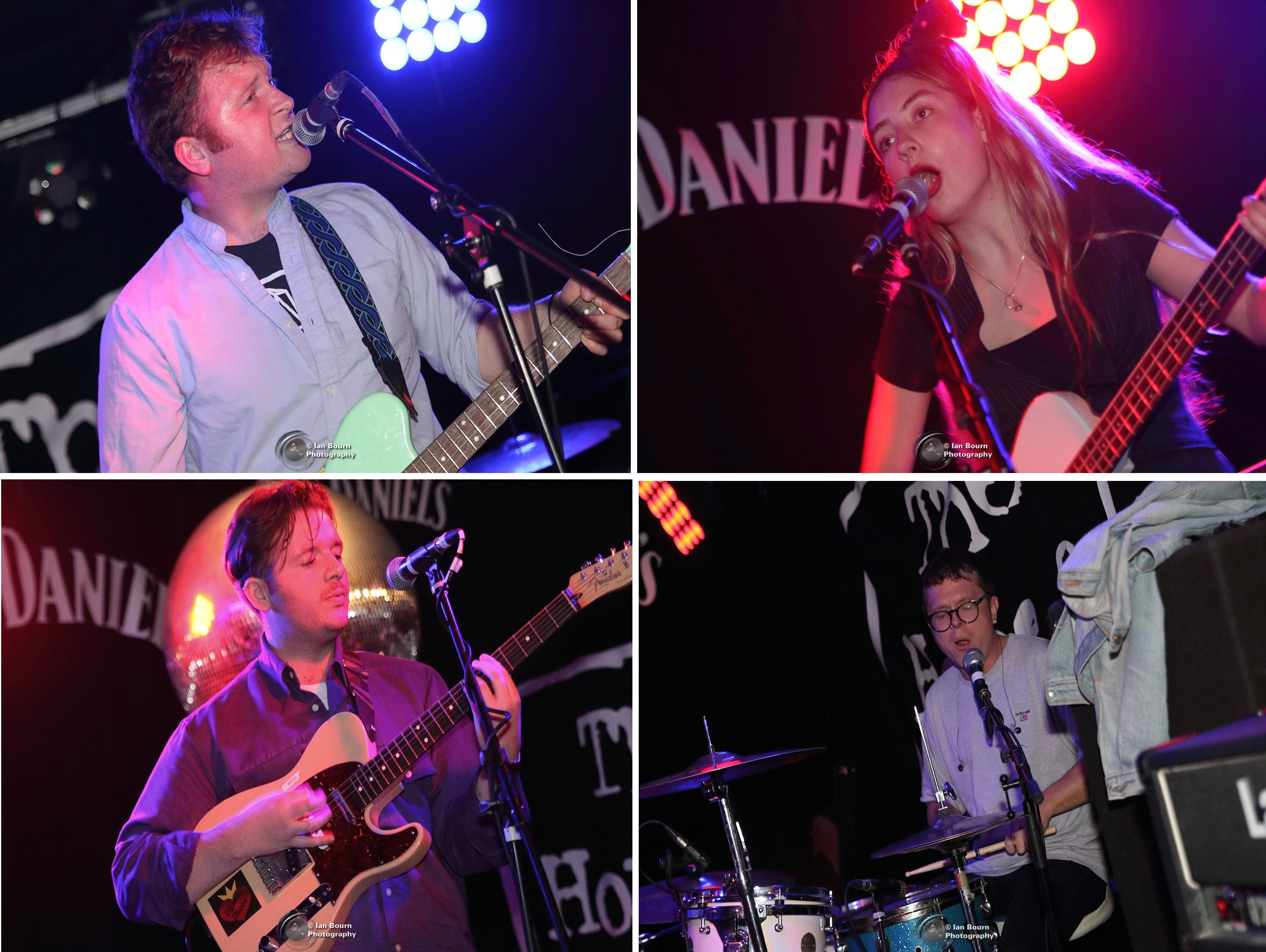 Time for the indie popper headliners SuperGlu who mainly hail from Manningtree, Essex as well as nearby Colchester, to show us what they can do.

SuperGlu’s personnel is made up of Ben Brown (vocals/guitar), Alex Brown (lead guitar), Krista Lynch (bass) and Ben Ward (drums). They formed in 2015 and released their debut EP ‘Horse’ in 2016 and ten days ago, (4th October), they dropped their new single ‘Forever Endeavour’, to much acclaim.

They have successfully built an avid following for their vigorous punk-pop sound, with support from Huw Stephens and Annie Mac at BBC Radio 1, Steve Lamacq at BBC 6Music, John Kennedy at Radio X and BBC Introducing. Also of note is that they have already played at SXSW Texas, USA and appeared at Reading, Leeds + Latitude festivals.

It’s fair to report that the college punters were well on side and frontman Ben Brown was lapping it up. They hold great shared harmonies atop their upbeat tunes, and anthems such as Weezer’s ‘Teenage Dirtbag’ spring to mind, and their uplifting vibe was a great way to round off a dank Monday evening. Their set was tight, when Ben B. wasn’t discussing the previous animal theme and other encounters, which turns out was a clever ploy for them to grab a quick rest. It was fun to bond with the audience, but even the sound guy told him to get on with it. Both myself and our photographer Ian, noted that they played a tight set! Given the chance, they could go far! 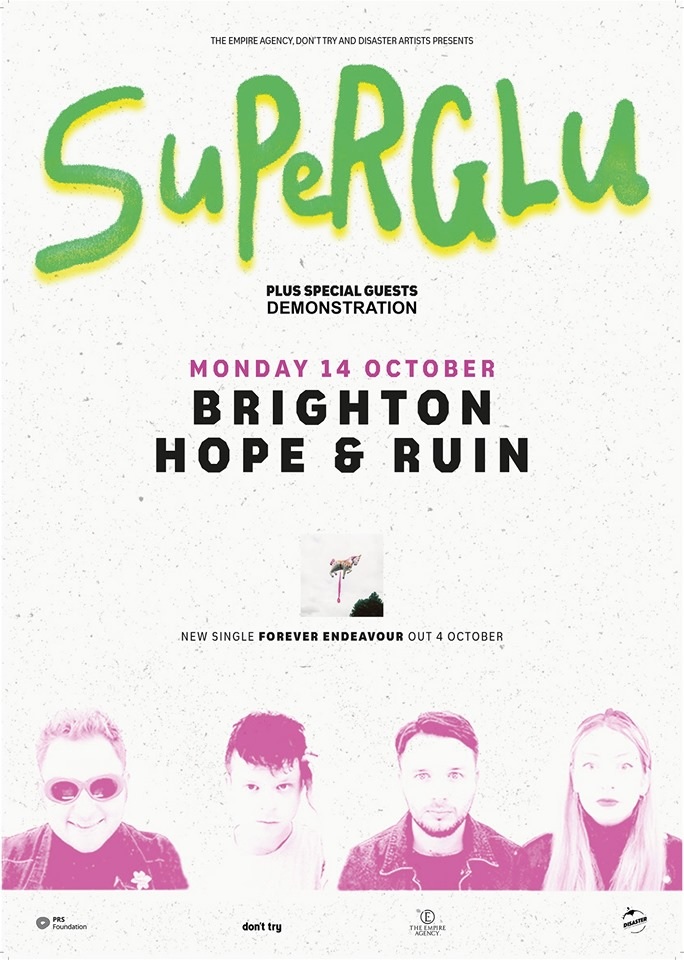