Hundreds of Brighton residents gather to stand in solidarity with Ukraine

One of the organisers, Paddy O’Keefe, said that he was very concerned about the threat of a “nuclear holocaust.”

He said: “The bombing of the nuclear plant, it’s the first time a nuclear installation has been exposed to battlefield conditions and been bombed.

“It is interesting. Stop the War has been criticised. It is hypocritical of UK politicians to complain about the protests. Keir Starmer said we were either ‘naïve’ or ‘facilitating Putin’.”

She read out a statement from Stop the War Coalition saying that the war in Ukraine was a disaster for the people of Ukraine and said: “We demand the withdrawal of all Russian troops.”

Jake Easby-Robinson, from the Peace and Environment Centre, spoke about the importance of community. He is a peace volunteer and he said: “Communities are torn apart and pitted against each other. We see each other and communicate with each other. When communities lose their role models, it is difficult to rebuild them. Communities have to have role models.”

He said that Ukrainians do not want to fight each other but there were factions from previous conflicts.

He said that there were millions of displaced people in Iraq, Libya, Afghanistan, etc, adding: “Our government is not doing enough for refugees.

“We need to rebuild democracy. It’s not just what’s on our TV screens and our phones. We need to understand the root causes of the conflict.”

Another of those at the demo, Ellen Graubart, spoke about the racist element in the disproportionate media coverage of the war in Ukraine.

She said: “These wars are being instigated and carried out by the imperialist agenda of the US and its little brother the UK to gain and retain control of natural resources and put in place puppet regimes around the world.

“The winners are the large corporations and the ‘military industrial complex’ and the losers are always the ordinary people who just want a decent life and safety for their families. 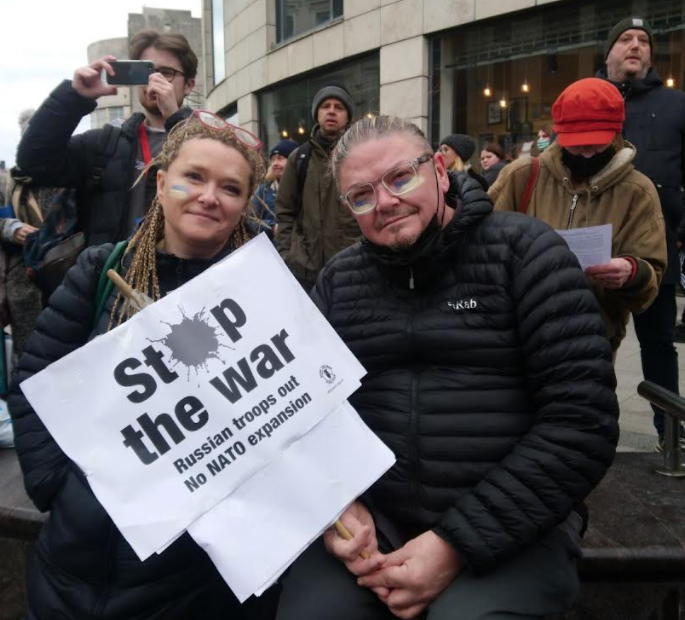 “There is a huge racist element to these wars and conflicts, as countries where brown and black people live don’t rate the coverage that a white country like Ukraine is getting.

“Note that brown and black workers and students trying to escape Ukraine are being stopped at the Polish border.

“Apparently Eurostar is giving Ukrainian refugees free passage to the UK while black refugees are left to drown in the Channel.

“The combination of the advance of NATO towards Russia’s borders, which the US and the West promised would not happen, against a cruel dictator with an enormous axe to grind, and who is hell-bent on defending himself against the threat to his position and as he sees it, an attack on his dignity, is bringing us nearer and nearer to midnight in terms of the possibility of a nuclear Third World War.

“There never has been a more urgent need for this insanity to stop. There will be no winners if we descend into nuclear war.

“We are already facing one enormous threat to life on this planet with global warming. We need to stop the war more than any time in history.” 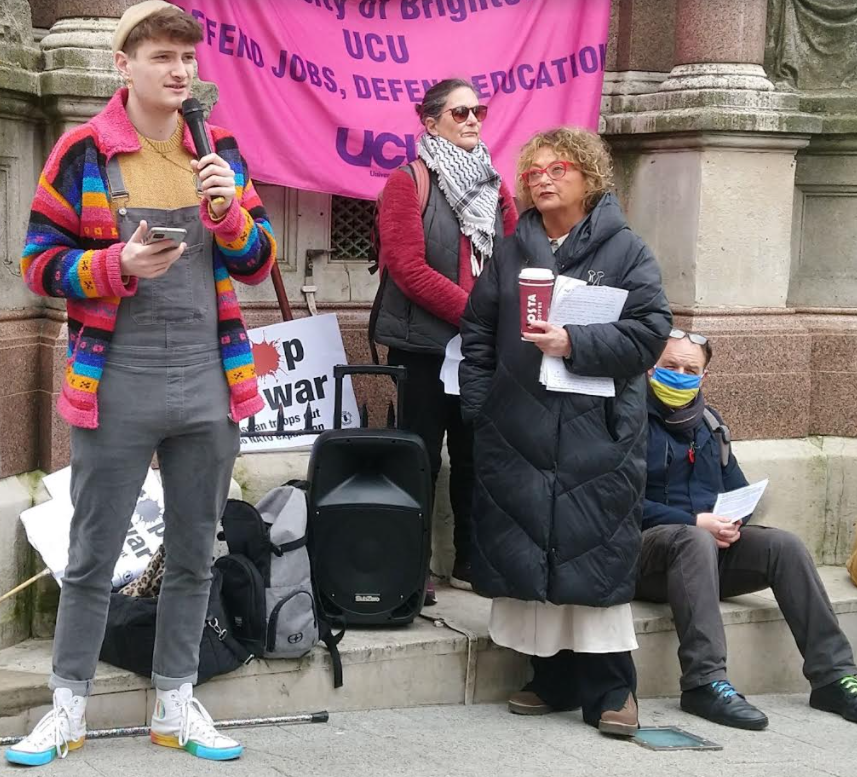 Phil Clarke, from the National Education Union (NEU), said: “We support the peace movement in Russia. The NEU solution is not more war. The solution is diplomacy, negotiation and solidarity.

“We see the missiles take off but we are not used to seeing the shells landing. People now understand what it means to be a refugee from war. We need to open the doors. The invasion is an outrage.”

Andy Richards, who represents Unison at the council, said: “Putin is a fascist, imperialist Kleptocrat.  Unison sends solidarity to the Ukraine people and calls for Russia to withdraw its forces.

“I am proud that Unison members working at the Isle of Grain terminal refused to handle Russian ships this week as did the Unite members in New England (USA) and Orkney (Scotland).

“We offer our solidarity to the Ukranian people, to Russians courageously opposing the war, to workers taking action against the war. We demand the UK government open doors to Ukrainian refugees.” 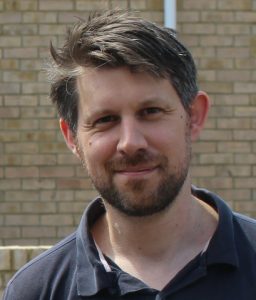 Tom Hickey, from Brighton University UCU, said: “We stand with the Russians who have lost their jobs and the 10,000 Russians arrested in dozens of cities for opposing the war. Every country is entitled to fight for self-determination.

“We cannot stand for imperial power – the tiny minority that wants to justify and excuse the invasion. There is no excuse and no justification.

“We must not ourselves be silenced because an explanation is not justification. There is a war of propaganda by politicians in this country. We need to successfully support the Ukrainians.

“The government says it stands for humanity in the face of Putin’s brutality.” 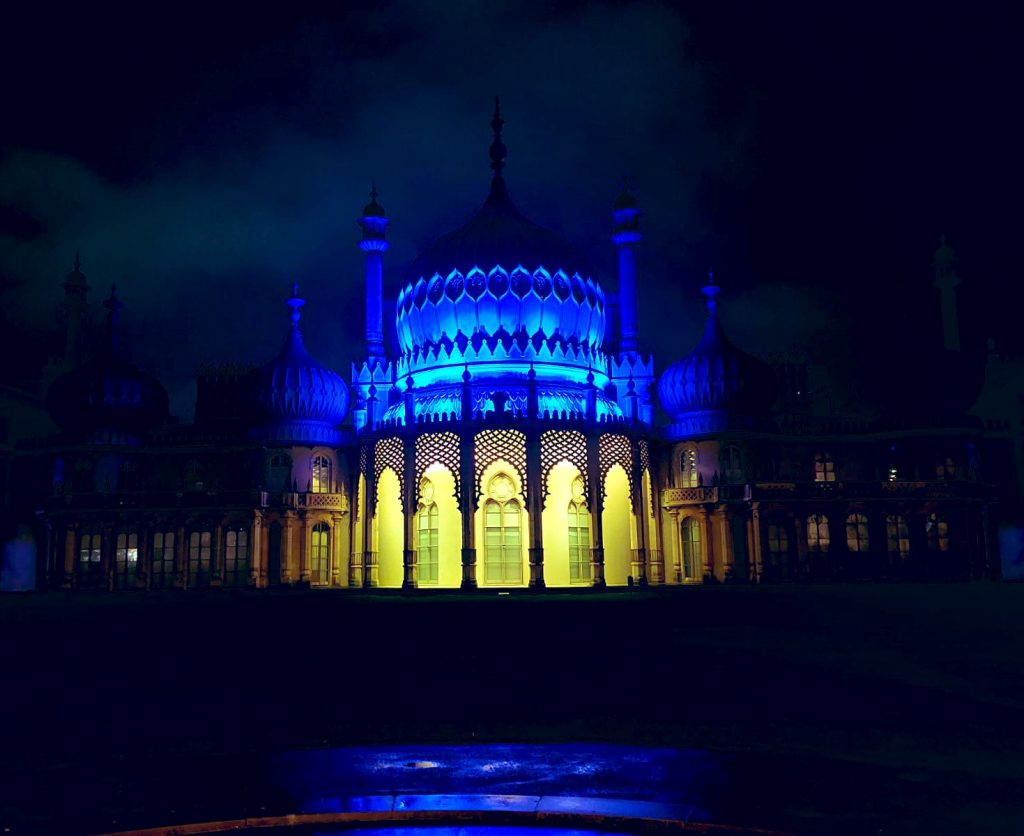 “The Tory Defence Secretary said we will go to war for weeks and months. There is western imperialism by NATO as well.

“Putin said the problem in Ukraine is created by the Bolsheviks – Putin blames Lenin. The affinity between nations recognises self-determination. Ukraine needs to be supported. Putin and his gang of thugs need to go.”

Jeremy Weinstein, from the campaign group Stand up to Racism, said that his grandparents were chased out of Ukraine by the tsar.

He said: “My son is living in Slovakia. He has just taken in a refugee. His daughter’s best friend is living in the metro sheltering from Putin’s bombs.

“He said he listened to Thought for the Day on Radio 4 today. They were talking about refugees with blue eyes and blonde hair.

“There is a Stand up to Racism March in London on Saturday 19 March. Protesters will leave Brighton Station at 10.15am. There is a public meeting on Wednesday. They are welcome here.”