A woman robbed of her phone with precious memories of her son killed in Afghanistan is appealing for information. 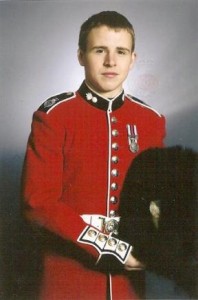 The victim, Jacqui Janes, 54 from Hove, was out walking her dog on a popular dog walking track of the South Downs just north of the A27 footbridge in Hangleton and next to the West Hove golf course around 1.30pm on Monday (September 15).

When a man approached her and she was pushed to the ground and her mobile phone was prized from her hands. The Apple Iphone 5 contained pictures and videos of Jacqui’s 20-year-old son.

Jacqui said: “They can have the phone, that doesn’t matter at all, I just want the sim card back. The background of the phone is a picture of Jamie hugging me, that’s all I’ve got of my beautiful son. Please find it in your heart to hand the phone or sim card in.”

Detective sergeant Simon Dunn said: “The victim’s son was killed in Afghanistan in 2009 and the mobile phone memory contained precious memories of her son which she is desperate to have returned.

“This robbery happened is broad daylight and there were people out walking their dogs and the suspect ran off towards Hangleton shops.

“He is described as a white man with stubble, aged in his late 20s and stocky build around 5′ 8″. He was wearing a distinctive grey hooded coat with stripes down the arms dark trousers and dark footwear and smelt strongly of alcohol.”

Anyone with information or saw what happened is asked to contact police on 101@sussex.pnn.police.uk quoting serial 762 of 15/9.